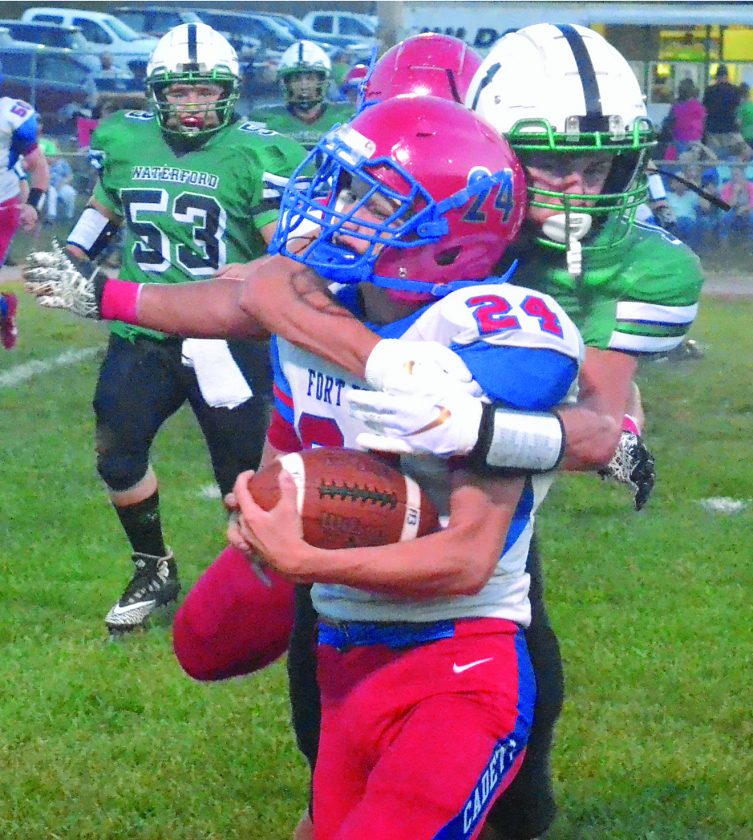 BEVERLY — Wheeling Central and Fort Frye’s consistent success the past few years in each’s respective state have left the small schools short on willing teams to add to the schedule.

Head coach Mike Young’s Maroon Knights were forced to look to Ohio and Virginia to reach nine games, but were still one short. Coincidentally, Eric Huck’s Cadets sat with a hole between trips to Monroe Central and Barnesville. Troubles with the Pioneer Valley Conference and teams dropping Fort Frye created the availability.

So, Young reached out to the 12th-year head man and after weighing his options, Huck accepted the request to face the two-time defending W.Va. Class A state champions.

“They are definitely going to be a challenge for us,” said Young. “We don’t shy away from anyone and we feel if we play a good schedule and get enough wins to get into the postseason it enhances our chances to play for a state championship.”

The Knights’ head man and his group compete against an undefeated Fort Frye team having faced one real test in its first five games.

Meadowbrook successfully weathered a 28-point second-quarter outburst to be within striking distance in the fourth quarter. Josh Hupp’s 69-yard scoring pass to Addy Black with 2:10 left put the Colts down by eight with 2:10 remaining in the contest. Meadowbrook though couldn’t recover the onside kick and the Cadets ran out the clock for the victory.

Mike DeVol’s Eagles avoided what no one else has against the Cadets this season – the big scoring quarter. A multitude of offensive weapons used to great effect in big eight-minute periods has broken wide open Fort’s other four games.

The margin of victory in those wins has been 38.8 points.

Finding the end zone for Huck’s group so far have been 10 different players. Running back Tyler Fisher leads the way with nine trips to paydirt and Brian Adkins and quarterback Ian Ellis each have six visits into the end zone.

Adkins though won’t be available against the Knights, but Young isn’t taking this for granted.

“We have outstanding respect for them and they really hit you with all facets and put a lot of points on the board. They are explosive on offensive and relentless on defense,” he said.

Of course, his team is no slouch either. Besides a lop-sided loss to a Linsly team that pounded Class AAA Morgantown, 44-17, last week, the Knights have averaged 32 points per contest in a 4-1 start.

The Brown University recruit’s 12 of 15, 168 yards and two touchdown performance along with 77 rushing yards and score on the ground proved the catalyst again one week later. He completed passes to seven different teammates in a 48-7 win over Western Reserve Academy.

“He (McGhee) is very good and can throw the ball. He sees the hole well and hits it quick on the ground too. He can hurt you through the air and on the ground,” said Huck.

Two-time W.Va. defensive player of the year linebacker Adam Murray leads a defense eager to make any lead hold up.

Everything adds up to a first meeting that could come down to who has the ball last.

“We have to control the ball and sustain long drives and score to win this game,” said Huck. “We have to be pretty close to mistake free with penalties and turnovers and disciplined on defense.”