Fort Frye defeats rivals in ‘Dig For a Cure’ match 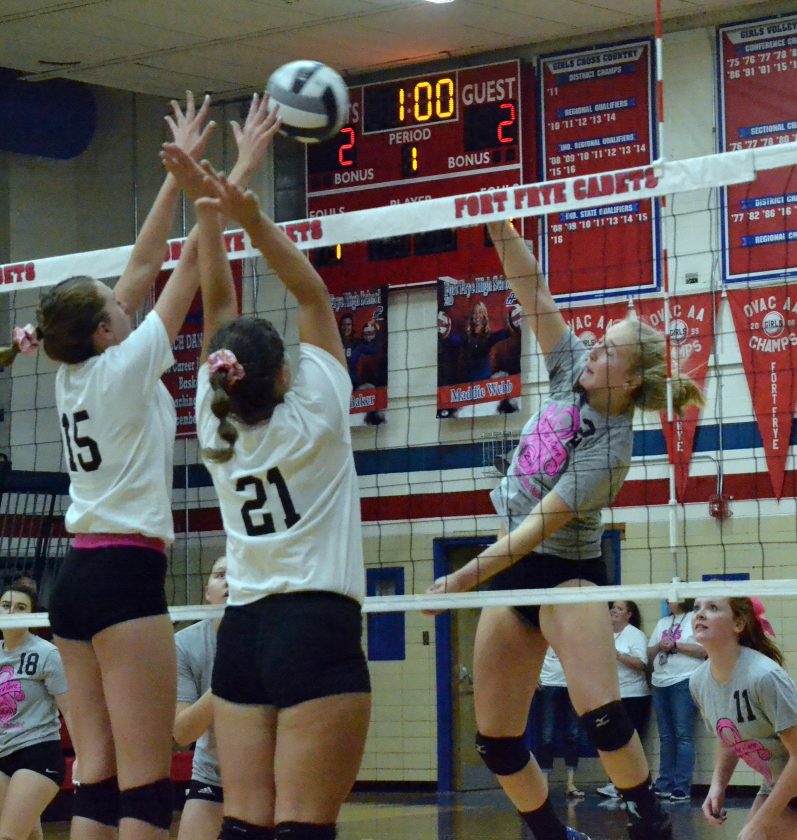 Photo by Ron Johnston Fort Frye’s Maddie Webb, right, goes up to spike the ball as Waterford’s Kaylea Harmon (15) and Maggie Huffman (21) try to block it during a high school volleyball match Wednesday.

BEVERLY — Fort Frye High wanted it more on “Dig for a Cure” night.

The host Cadets swept Waterford High for the second time this season, 25-13, 27-25, and 25-16, in non-conference volleyball action Wednesday evening

“Some of our girls were talking about the (sectional) tournament (next week) but I told them Waterford’s first,” said first-year FFHS head coach Emily Ohrn. “We needed a big win against Waterford going into the tournament.

“The girls have really worked hard over the season to get where we are now. Hopefully, that can keep going.”

Fort (14-6) was led by hitters’ Maddie Webb and Julia Zalmanek, who had 20 and 15 kills, respectively. Setter Steph Camden finished with 36 assists and 10 digs.

As a team, the Cadets recorded 47 kills.

“It was not our best night,” said WHS boss Kim Barker. “We came in here knowing what Fort Frye has and what they can do. We knew that Maddie Webb and Julia Zalmanek were going to be their two go-to players all night, and we just couldn’t shut them down.”

During first-set action, the Cadets jumped out to a 5-0 advantage, and never looked back. Zalmanek closed out a 12-point win with a kill.

The second game was a see-saw battle and featured 12 ties. After Wildcat server Alayna Jones got an ace to make it 23-19, the visitors appeared to be in the driver’s seat. But Fort rallied and ultimately eked out a two-point victory on Webb’s kill.

“In the second set, we battled and had a good lead,” Barker said. “But we just came up short, because of errors — and we weren’t as aggressive as them.”

Ohrn said she wasn’t really worried about the outcome in the second game.

“I kind of liked it that we had to pick our momentum back up and work for it a little more,” she said. “We’ve been down in games before but haven’t really recovered from being down. So, it was good to see that we could get back in a groove.”

Sparked by Zalmanek and Webb, Fort Frye won pretty much going away in the third and final set.

“But tonight, we weren’t the better team.”

Waterford is scheduled to host South Gallia on Senior Night tonight. If the Wildcats prevail, they will clinch the Tri-Valley Conference-Hocking Division championship outright.