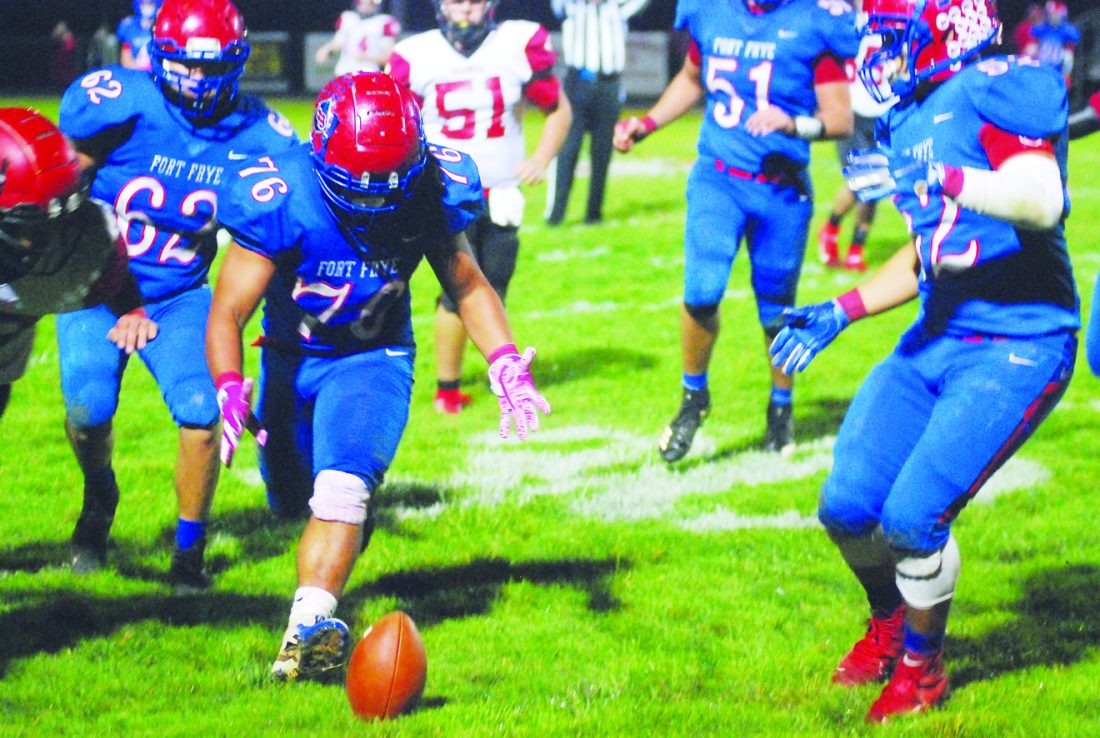 Photo by Mike Morrison Fort Frye’s Isiah Jones (76) gets ready to pounce on a loose ball during a high school football game Friday night against Caldwell in Beverly.

The Cadets honored their six seniors who have lost a grand total of one regular season football game in their varsity careers on Friday night and then went on to rout the visiting Caldwell Redskins 58-7 to improve to a perfect 8-0 on the season.

Fort Frye pulled out to a 12-0 lead at the end of one period and then scored 20 points in both the second and third periods to easily dispose of the Redskins.

Despite committing nine penalties on the night for 69 yards and missing out on five of nine extra point attempts, Cadet head coach Eric Huck felt his team made up for it’s shortcomings by playing it’s usual dominant defense.

“The first half I thought we struggled a little bit offensively with all the penalties but we were able to overcome them and started playing well,” said Huck, in his 12th season as head coach at The Fort. “Our defense has been playing lights out here lately and I thought they did again tonight.”

That fierce defense allowed Caldwell to gain a grand total of 85 yards in the game while the Cadet offense piled up 453 total yards including a cool 300 on the ground.

Cadet senior Zane Wallace had a senior night to remember and it started early when he rambled 17-yards on the Cadets first possession of the game to give them a 6-0 lead.

Yet another Fort Frye senior got in on the act to open the scoring in the second period when Tyler Fisher cruised into the end zone from six yards out before Wallace took matters into his own hands to send the Cadets to the locker room with a 32-0 lead.

Wallace scored his second touchdown of the game on a 35-yard run in the second quarter and shortly after returned a punt 64 yards with 1:23 to play in the half to ensure that the running clock would be activated for the second half.

The Cadets got the ball to begin the second half and moved deep into Caldwell territory before senior lineman Isiah Jones got to take his turn as a running back and scored on a two-yard touchdown plunge to increase the lead to 39-0.

Sophomore Collin Welsh accounted for the next Cadet score on a 7-yard run before Wallace sturck again as he picked off a Braxton Dudley pass and rambled 35 yards for his fourth score of the game.

Fort Frye capped their scoring in the final period on a 3-yard run by Ethan Dusky and Caldwell avoided being shutout when Dudley broke a 35-yard run with a little less than five minutes to play in the game.

Wallace picked up 103 yards on the ground on just six carries while Fisher totaled 50 yards on seven touches and Welsh finished with 48 yards on eight carries.

Ellis completed all of his pass attempts (6-6) for the second straight week while totaling 153 yards and the touchdown.

Caldwell slipped to 2-6 on the season with the loss while the Cadets remained perfect with their 25th consecutive regular season win.

Huck will no doubt miss seniors Schilling, Fisher, Caden Fryman, Wallace, Kadin Six and Jones but is glad they still have some football left to play.

“I can’t say enough about these guys and even though it’s senior night I am glad we are not done yet,” said Huck, whose team travels to Shenandoah on Friday night for their second straight game against a Noble County opponent. “We want to keep these guys around as long as we can. Every single one of them is a very good football player and an even better person.”

Caldwell will travel to River next Friday night.