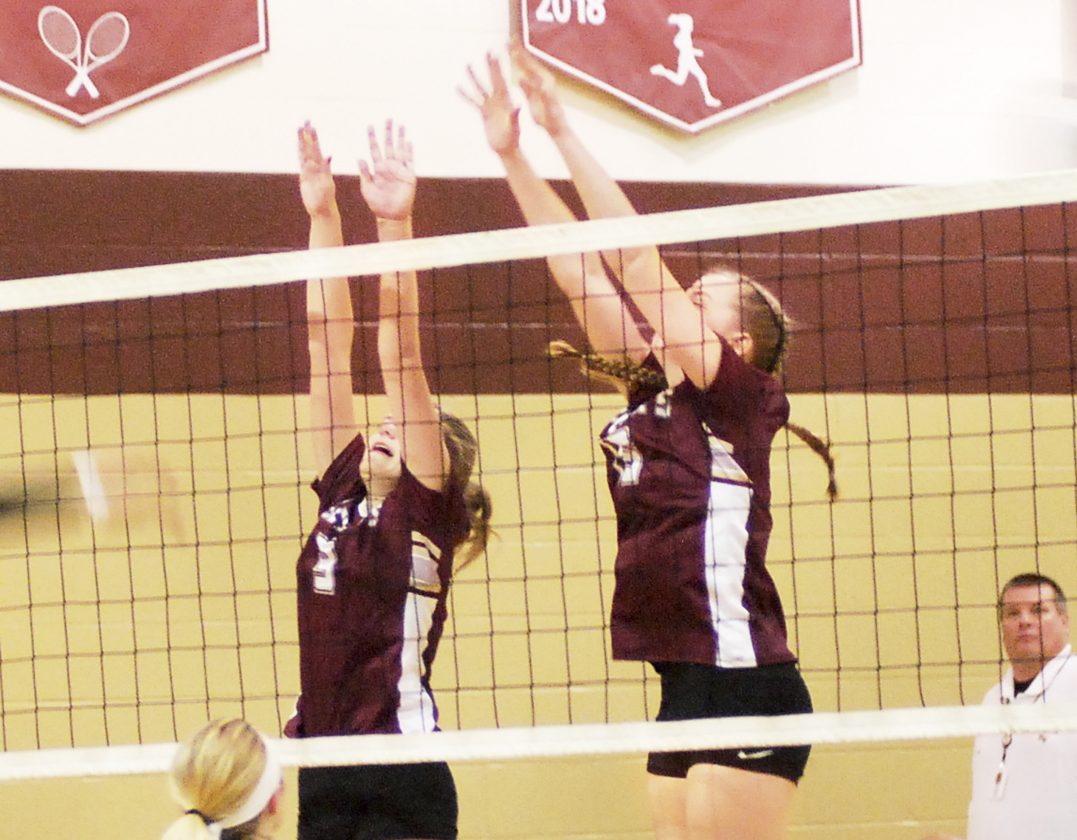 Photo by Josh Hughes Williamstown’s Payton Woodard (3) and Brittney Hooper (15) go up for a double block in a match against Wirt County Monday inside Williamstown High School. The Yellowjackets dropped a pair of matches to their visitors.

WILLIAMSTOWN — Senior night hit a snag for the Williamstown Yellowjacket netters, as they dropped both matches on Monday night to Philip Barbour and Wirt County, respectively. The Colts won the tri, as they bested both local teams in two sets.

The Yellowjackets gave the visitors from Philippi a fight in the first set, but a 25-18 finish in that one meant they had work to do in the second set.

However, a second-set rally would not come to fruition, as miscues sunk their chances. In the 25-10 second set, an ace from Kamryn Haynes opened things up, but PBHS got its act together after Skyler Chancellor scored with a kill to give the ‘Jackets an early 2-0 advantage.

While WHS kept up with the score tied at five, the frontline attack of the Colts put an end to any talk of a set two victory.

The duo of Bryanne Tustin and Alyssa Hill were involved on many scoring opportunities for the road team, and an 8-1 run to finish the match seeled Williamstown’s fate.

On the other hand, Wirt County gave Philip Barbour a tougher time, thanks to awareness by the tandem of Kylie Stephens and Madison Richards.

A 25-19 defeat in the first set wasn’t what the Tigers wanted, but they fought back after being down 12-3. Kills from Emma Kennedy and Tustin made that deficit what it was, but a 7-2 Tiger run put them right back in the set.

A block from Wirt’s Emma Wyer follwed three consecutive Colt errors, as the comeback attempt was on. Stephens led the way for the Tigers in kills, and a well-timed K after a long volley trummed the deficit even more. Adeline Sims later found Wyer on an assist, as she buried a kill that cut the PBHS lead down to 15-10. A couple more Tiger points made for a close set, but the Colts stormed infront with kills from Hill to take the first set.

A 26-24 loss was had for the Tigers via a big comeback by the Colts. Down 16-7, they reeled off a 13-2 run to tie it up at 19. Back-to-back aces from Maggie Bailey forced the Colts to take a timeout down 22-20, but they again fought back to down the Tigers after a kill from Lilley Criss ended the match.

Finally, the Yellowjacket netters squared off with their Tiger counterparts after Senior night festivities concluded. A 25-22, 25-17 victory for the Tigers came thanks again to the heroics of Stephens.

On the topic of her performance, WCHS head coach Miriam Smith said good things about how she wasable to command attention from Yellowjacket defenders.

“That was some teamwork that worked for us,” Smith said. “It helps us, and we’ve got a lot of people digging up the balls. Really, everyone digs in and helps us.”

With LKC placement matches on the horizon, the Yellowjackets (18-15-3) came up short on Senior Night, and head coach Rachelle Cole wasn’t shy about what her team needed to work on.

“They did fight hard at times, but we’ve got to be able to put more than one series together without making mistakes,” she said. We definitely made mistakes we can control. We just have to try and minimize those mistakes, as we move closer to the postseason.”