Marietta College tripped up by Heidelberg, 58-32 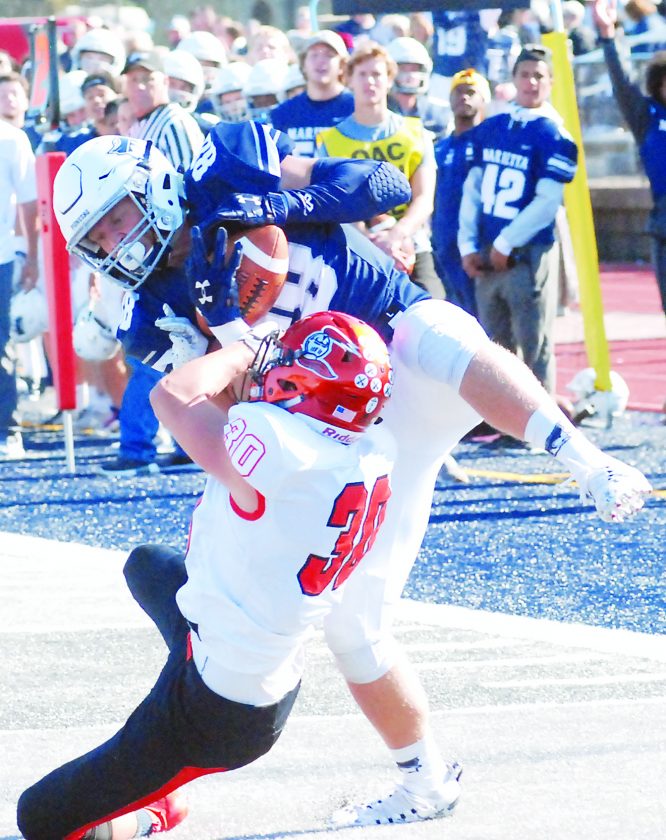 The visiting Student Princes scored the first 14 points and final 28 points against Marietta College Saturday at Don Drumm Stadium, and while the Pioneers generated a homecoming rally, it wasn’t enough as Heidelberg left town with a 58-32 victory.

The Student Princes built a 28-6 lead in the second quarter, but Marietta cut it to 31-25 by halftime and took a 32-31 lead to open the third quarter. It was all Heidelberg from there, though, as the visitors closed the game on a 28-0 run.

Marietta quarterback Kyle McSweeney had a big day passing (27 for 49, 440 yards, four touchdowns, two interceptions), but Tanner Clark was limited to 38 yards on 21 carries as Heidelberg shut down the Pioneers’ ground game.

The struggles in the run game, along with some less than stellar special teams play, contributed to Marietta getting down 22-points early.

However, a 19-point second quarter got the Pioneers right back into the game and down only six at the break.

With new life, Marietta got the ball first to start the second half and quickly cashed in.

On third-and-6 in their own territory, Ryan Van Meter made a diving 22-yard catch to keep the drive alive.

McSweeney then completed back-to-back 20-yard passes to Gage Giovengo, the second going for a touchdown. Jacob Griffin’s extra point gave the Pioneers their first lead of the afternoon, 32-31.

It was short-lived, as Heidelberg drove right back down the field and scored on Gephart’s 12-yard TD pass to Dimitri Penick to make it 38-32 at the 9:02 mark in the third.

Marietta drove to Heidelberg’s 28-yard line on its ensuing drive, but an offensive pass interference halted the momentum. A fake punt attempt was sniffed out by Heidelberg, which got the ball and scored again on Gephart’s 17-yard touchdown strike to Keivon Belcher, making it 45-32 with 3:04 left in the third.

With 11:21 left in the fourth quarter, Marietta drove to Heidelberg’s 3, but McSweeney was picked off in the end zone to preserve the two-score lead.

Heidelberg put the game away with 14 unanswered points in the final nine minutes — a 37-yard TD run by Jace Grossman and a 19-yard TD pass from Gephart to Penick — to stretch the Student Princes’ lead to 58-32.

Grossman, who didn’t have a carry in the first three quarters, finished with 11 rushes for 131 yards. Belcher and Maceo Matthews both finished with 91 receiving yards while Penick added 76.

Giovengo and Andrew Barker each finished with 124 receiving yards for Marietta, while Van Meter caught six balls for 77 yards.

After it appeared Heidelberg was ready to run away with things, the Pioneers got themselves back in the game with an improbable sequence of events right before halftime.

Instead of running the clock out and going to halftime, Heidelberg tried to drive the ball and Gephart was picked off by James Knox, who returned it 18 yards to the Student Princes’ 15. On third-and-9 from the 14, McSweeney found a wide open Van Meter in the back of the end zone for the touchdown. The kick was blocked to make it 31-25 at halftime.

The game’s first points came as Matthews caught a 16-yard touchdown pass from Gephart before Yearby ran for a 3-yard score to make it 14-0 at the 7:38 mark in the first quarter.

The Pioneers got on the board on McSweeney’s 6-yard TD run. The kick was blocked to make it 14-6.

The Princes went on another 14-0 run thanks to Belcher’s 16-yard TD catch from Gephart and Yearby’s 55-yard scoring jaunt to put Marietta in a 28-6 hole with 8:24 to play in the first half.

Marietta needed to strike back quickly and did, scoring on McSweeney’s 12-yard touchdown strike to Robert Nelson 35 seconds later. Clay Mastin’s 44-yard catch and run set up the score. The two-point conversion run was stuffed to make it 28-12.

Heidelberg drove all the way to Marietta’s 3-yard line on the ensuing possession, but the Pioneers got the third-down stop and forced a Brandon Steckel 20-yard field goal.

“I thought we had our chances,” said Marietta head coach Andy Waddle. “We did some good things in the second quarter and early in the third quarter. They forced our hand by loading the box and really were committed to limiting Tanner. Kyle was tremendous and certainly had his best outing. He was able to spread the ball around to a number of different receivers and it was all the more special wearing No. 38 in honor of Joel Wunnenberg.”

The Pioneers will look to snap a two-game losing streak next Saturday when they visit Wilmington for a 1:30 p.m. kickoff. Heidelberg plays host to Otterbein at 7 p.m. next Saturday.