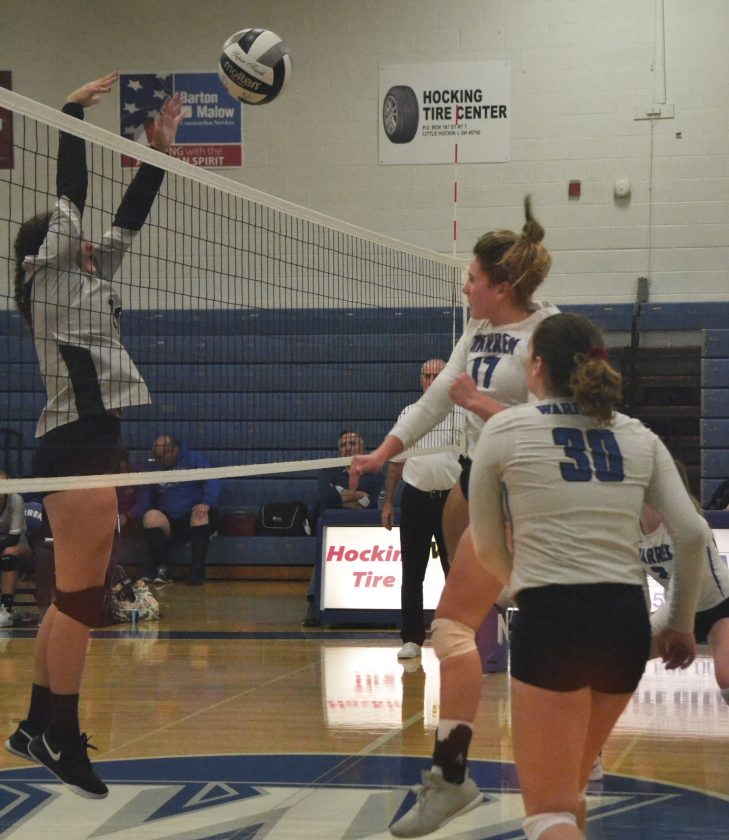 Warren’s Abby Gilliand spikes the ball while River Valley’s Madison Hall goes up for a block attempt at the net during the Warriors’ 3-2 Divison II sectional opening round win against the Raiders Monday night in Vincent. Photo by Tyler Bennett

VINCENT– Mistakes and sloppy plays made it closer than what the Warren Warriors and head coach Michelle Tyo wanted it to be after the first two sets when hosting the No. 9 seed River Valley Raiders in the OHSAA Division II sectional opening round Monday evening. After winning the first set 25-20, the Warriors dropped the second set 25-22 as the visiting Raiders rallied from a 17-12 deficit, that included a 12-4 run.

However, it was all Warren for the remainder of the night, taking the next two sets, winning 25-17 and 25-16 at Warren High School.

“We honestly didn’t play up to our potential tonight, there were moments where we played our game and I thought ‘you know, we are kind of going to run with it’,” Tyo said.

“But then we let them right back in the game. They had a couple of good servers and we just struggled on serves. I’m excited that they won, not super impressed with how they came out and performed tonight because we have to really step up our game if we want a chance to beat Vinton County.”

Haylee Morgan fed her teammate well the entire night, as she had a game-high 42 assists, along with 12 digs and two kills.

The Warriors need another standout performance from the junior at No. 1 Vinton County at 6 p.m. Wednesday night against the No. 1 seed Vinton County. The Vikings ended their season on year ago.

Gilliand made her presence known at the net, leading Warren with a team-high 12 kills, seven blocks, six digs, and an ace as well.

Ford and Foy both had seven kills between them and junior Autumn Miller finished with four.

“I had some reliable hitters tonight, they can find the open spots on the floor, they were swinging hard and kind of using blocks to our advantage. I was really impressed with how they came out tonight,” Tyo said.

Mikenzi Pope was the only Raider to amass double-digit kills with 12, while Kasey Birchfield fell one short of double-digits.

River Valley servers found holes in the Warriors defense for the majority of the night, with the Raiders scoring 22 team aces compared to only two by Warren.

Pope and Alex Wood each had double the amount of Warren’s team totals with four aces between the duo and Taylor Huck had two.