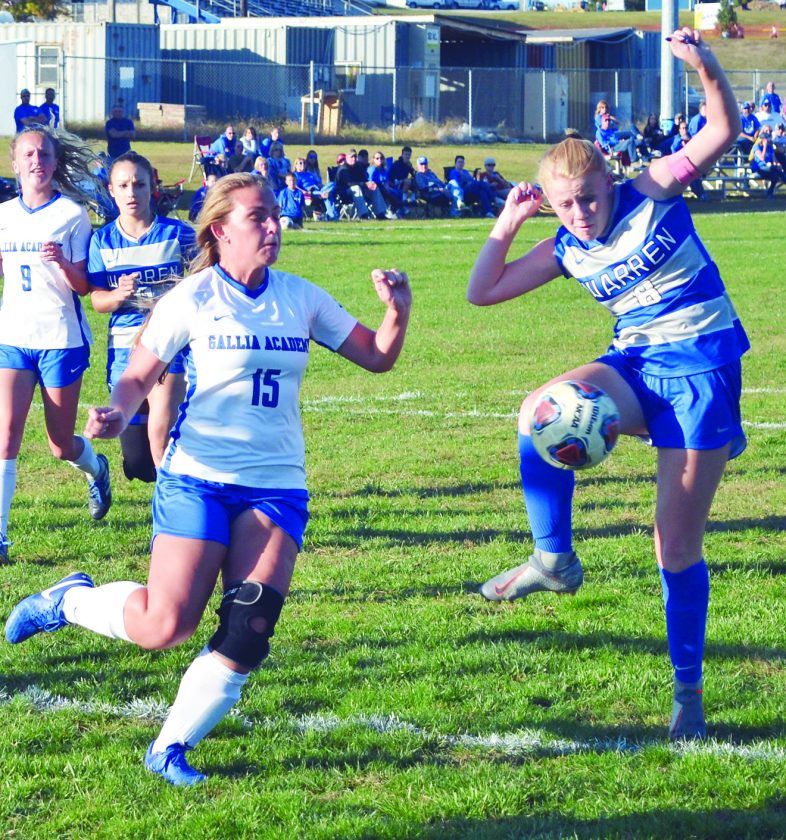 Smith and Sloan each has 13 goals on the season.

“It’s been a battle between them two from the get-go, which is nice to have that competition,” said Warren head coach Andy Pinkerton. “They’re both been playing well this year.

“Sophie Cochran has gotten around 10 goals this year, and Jaelyn Ludwig has around seven. So, we’re pretty balanced offensively. It’s going to be a little struggle for other teams to play us, because we can score from multiple players.”

With the victory, second-seeded Warren (11-3-3) is scheduled to play either Waverly or Jackson in a sectional final at 2 p.m. Saturday.

Gallia Academy exits with a 9-6-2 mark. The Leah Polcyn-coached Blue Devils dropped a 4-0 decision to the Warriors early in the regular season.

GA’s lone goal was by sophomore Kyrsten Sanders in the second half. Devils’ keeper Brooklyn Hill finished with 13 saves.

Warren was on the offensive from the start, and had Gallia Academy in a defensive posture for most of the opening half.

The Warriors, though, did not get on the scoreboard until the 34th minute when Smith drilled a shot from the left flank into the upper right netting of the goal. Senior Lacey Cline got the assist.

“It was a good cross, and I kind of just went around the defender,” Smith said.“I picked a side and hit it top right corner — and it went in.”

About a minute or so later, Warren stretched its advantage to 2-0 on Sloan’s unassisted goal.

“Basically, I just tried to beat the defender , go around her, and get a cross off to the back side because that’s a lot of times open,” Sloan said. “And the ball just went over the goalie’s head.”

Warren led 2-0 at the intermission.

During the 62nd minute, Gallia Academy’s Sanders received a through-pass from sophomore teammate Preslee Reed, outran the Warrior defense, and beat Ryan with a low shot to cut it to one.

“We kept a lot of pressure on, and we knew they (Blue Devils) were going to try to counterattack us,” Pinkerton said. “And for the most part, our defense held strong.

“But they were able to slip one through. It’s just one of those things that happens. We got caught off guard.”

Warren got that goal back, though, with 8:13 remaining in the match when Smith beat Hill with a boot, making it 3-1. Junior Kaylee McGee was credited with an assist.

“I just kicked it and it went right in,” Smith said.

The Warriors outshot the Devils, 31-3.

“We definitely created a lot of opportunities,” Pinkerton said. “I think that was a little bit of our frustration that we couldn’t get the ball into the back of the net. But we kept the pressure on.

“We got three goals but as a coach you always want more. It allows us to be able to relax a little at the end and be able to get some faces in there that haven’t had a lot of playing time.”