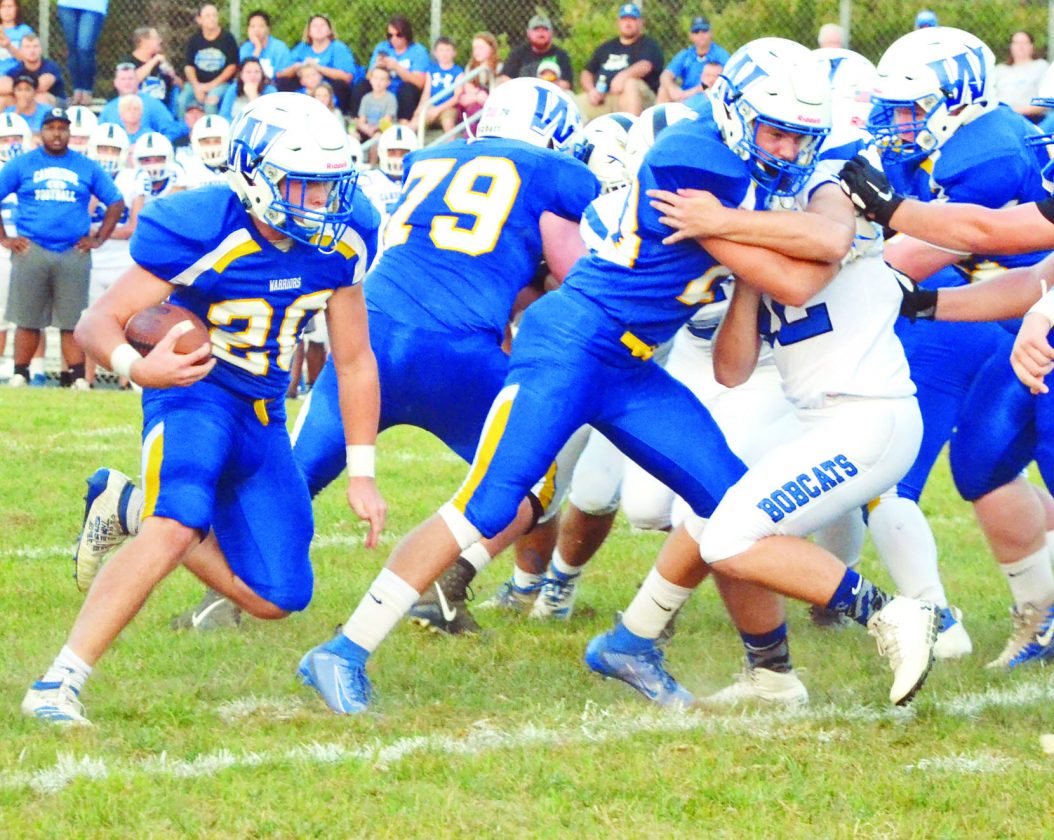 Photo by Mike Morrison Warren’s Brayden Gerber (20) carries the ball during a high school football game against Cambridge earlier this season in Vincent.

VINCENT — Since a season-opening loss to two-time defending W.Va. Class A state champion Wheeling Central, the Williamstown Yellowjackets have been nothing short of dominant.

The Terry Smith-coached squad not only is 5-0 since week two, but has outscored its opponents 177-14.

The offense has clicked on the ground and in the air while the defense has been suffocating. It’s what folks have come to expect from Williamstown football since Smith took over.

Last week, the ‘Jackets defeated rival St. Marys 35-0, the defense’s third shutout of the season. It sets up an intriguing matchup this Friday as Williamstown’s vaunted D travels to Washington County to take on a Warren offense that is averaging 38.5 points per game this season.

“I think we match up alright,” Smith said. “(Warren’s) certainly improved quite a bit. They look really good. They throw the ball around and they catch the ball well. They’ve got some good athletes.”

Junior quarterback Kurt Taylor leads the Warren offense, with Evan Gandee and Brandon Simoniette forming one of the top receiving duos in the state. Taylor this season is 107 for 160 passing for 1,652 yards, 20 touchdowns and five interceptions. Gandee has 36 receptions for 635 yards and nine touchdowns while Simoniette has caught 37 balls for 588 yards and six TDs.

John Shoup and Brayden Gerber give the Warriors options out of the backfield. Gerber has 60 carries for 343 yards and four scores while Shoup has 38 rushes for 290 yards and six touchdowns.

“Athletically, skill-wise, I think we match up well,” said Warren head coach Matt Kimes. “They’ve got some guys that can create some problems, but we do too. I’m not sure they’ve played anybody that can throw the ball around like we do.

“The thing about (Williamstown) is their kids are super confident in what they’re doing. They’ve been in the same system for many years. They’re coached really well. They’re disciplined and they play with great effort. We told our kids we’ve got to match their effort.”

“It doesn’t look like we can get there (on blitzes),” Smith said. “It seems to us that the ball comes out of his hand pretty quick. I think we’ve got to play pass defense morese than blitz.”

As well as Williamstown’s defensive line has played this season, the ‘Jackets may not need to send extra pressure. Guys up front such as Leewood Molessa, Nick Bondi, Eric Brown, Jacob Modesitt and Caden Tallman have been one of Williamstown’s biggest strengths.

Kole Sutton leads Williamstown with three interceptions and could play a pivotal role in slowing the Warriors.

Perhaps the best thing Williamstown can do to stop the Warren offense is keep the ball away from them.

Williamstown’s rushing attack, led by running back Ty Moore (122 carries, 657 yards, six touchdowns) and quarterback Brayden Modesitt (46-249, 4 TDs), will look to sustain drives, chew up clock and “keep it out of their hands,” Smith said. “We’ve got to try to slow them down.”

Modesitt has also shown the ability to throw ball, having completed 53 of 81 pass attempts for 857 yards, nine touchdowns and just one interception. His top target has been Brown, who has caught 20 passes for 328 yards. Bondi has 18 catches for 279 yards while Mason Deem has 12 receptions for 203 yards and a team-high five receiving touchdowns.

Warren will counter on defense with linebacker Josh Welch, who has a team-high seven sacks, and Gandee, who has four interceptions out of the defensive backfield.

At 4-2, Warren has already doubled its win total from last year. It’s been an exciting season for a Warrior squad full of kids who have been starving for improvement.

“They’ve been craving success,” Kimes said of his players. “They’ve been working very hard. I’m very happy for them getting to reap the rewards and see signs of success. I don’t want them to be satisfied, either. I want them to push themselves further. I think they understand and don’t think they’re content.”

“When we don’t beat ourselves, we’re pretty tough to stop,” Kimes said. “If we can execute and put pressure on the defense, we’ll continue to be successful.”