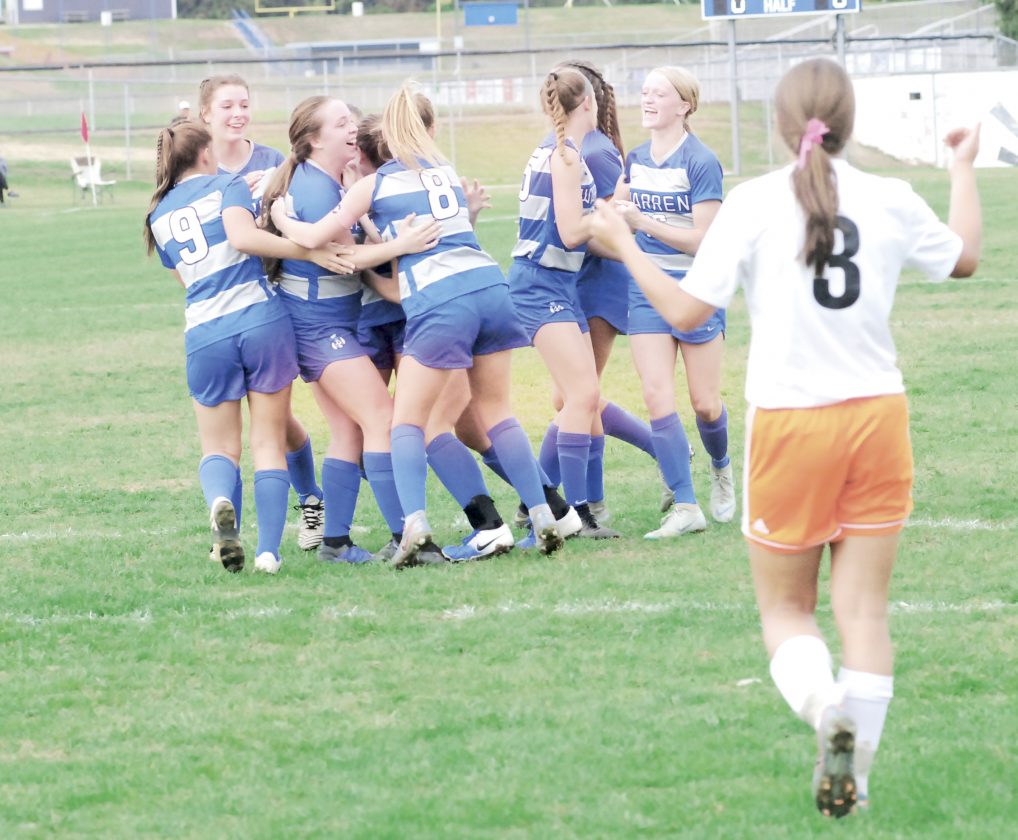 Warren’s Macie Smith is embraced by her teammates after scoring the go-ahead goal in the 73rd minute of the Division II Sectional Championship as Waverly’s Alexis Murphy looks on in disbelief Saturday in Vincent. Photo by Josh Hughes

VINCENT — High drama unfolded late in Vincent, as a 73rd minute goal from Macie Smith lifted the Warren Warriors over the Waverly Tigers in a 1-0 thriller during Saturday afternoon’s Division II Sectional girls’ soccer championship. When these teams met earlier in the season on Sept. 23, the Warriors used their defensive pressure to limit opportunities for the Tigers in a 3-0 win. Much like that match, this one featured the same defensive output with higher stakes attached to it.

That game-winner came as Warren was trying to get out in front on fastbreaks throughout the contest.

A combination of offensive miscues and an equal defensive effort from the Tigers thwarted any chance of a goal in the early going. However, Alysa Pinkerton was working on the right baseline against a Tiger defender when she found Smith for the decisive score.

The Warren bench erupted in cheers, as the Warrior players on the pitch all came together to embrace Smith for her triumph. It was a culmination of hard work from the goalkeeping and backline of the blue and white, and head coach Andrew Pinkerton spoke of their contributions while they were celebrating in the background.

“That was just straight adrenaline, straight adrenaline. We’ve just been waiting for this moment to get past this second game in the tournament for quite a bit of time,” he said. “The celebration on the bench was amazing, and you can hear them going on right now. My backline is so solid. We’ve only given up 16 goals through 18 games, which is so much better than what we did the previous year.”

As for Smith, she tried throughout the duration of the contest to create separation, and in that 73rd minute, she was finally able to get the open look she wanted. At the conclusion of the match, she talked about what this moment meant to her.

“I was just really happy. My team worked hard, got the ball to me, and I just picked the top corner, and it went in,” she said.

The thought of playing past the regularly-scheduled 80 minutes crossed Smith’s mind, as offensive opportunities stayed at a premium for both sides. Smith was preparing herself for this possibility, but it was not meant to happen.

“At halftime, I was like, ‘Ok, we need to pick it up’ and we did. We got past defeat, and it just happened for us. I think we can go far. We did great this year, and we’re not stopping. I believe in us.”

Another believer in this Warren (12-3-3) squad as they head toward a district semifinal match in Logan on Thursday is goalkeeper Millie Ryan. Ryan was always in the right place at the right time for her team, as she dueled with Waverly’s keeper, Anna Jordan. Her six saves were enough to preserve the shutout, and Jordan’s 12 saves made her the tough-luck loser. Ryan was also complimentary of the Warren backline in the victory.

“I had a lot of trust in all my teammates. The offense did a good job in the second half keeping it up there,” she said. I really owe a lot to my defense. I’m very thankful for that. I trust all of them, and I know the goal was to win this sectional championship. I feel like we all just banded together and got it done.”