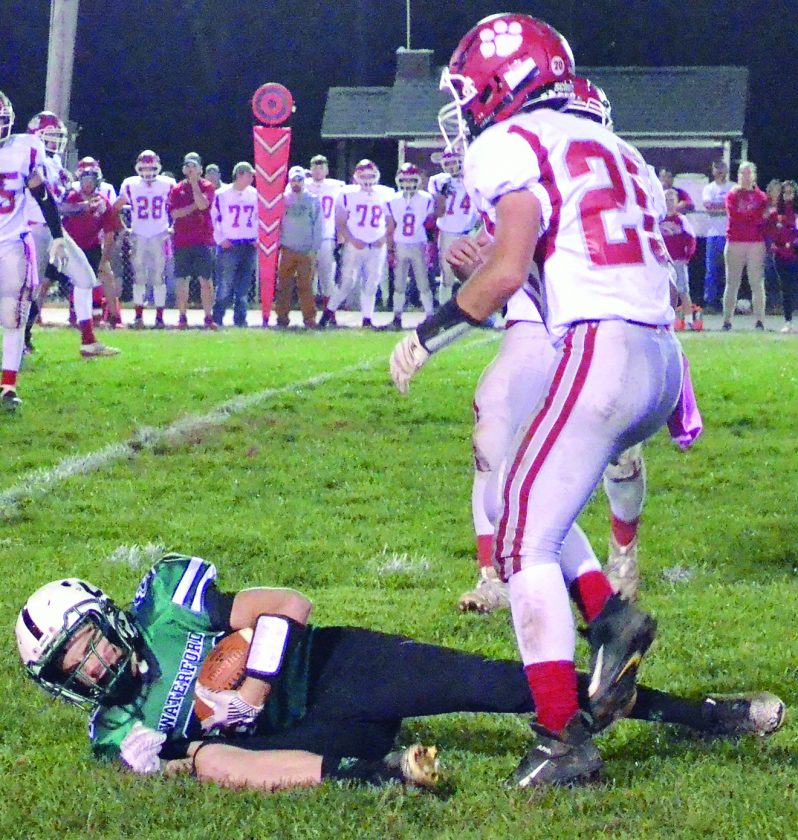 WATERFORD — Waterford High was hurt by the “Wright” stuff.

“They’re a power team that loves to run between the tackles, and that’s what they did tonight,” said WHS head coach Eric McCutcheon. “But we made them earn it, though. Both of these teams are going to be sore in the morning.”

“Trimble has a really good quarterback in Kittle,” McCutcheon said. “He extended and made plays.”

Overall, the undefeated and Phil Faires-coached Tomcats — No. 3 in OHSAA Division VI, Region 21 with a 6-0 record– had a balanced attack with 234 rushing yards and 148 passing yards for a total of 382 yards — and no turnovers.

Defensively, Todd Fouts and Bryce Downs each had a pick for the Tomcats.

THS has now shut out five of its six opponents, and allowed only one touchdown this season.

Waterford, No. 7 in Division VII, Region 27 with a 4-2 mark, was limited to 93 total yards and five first downs in the contest. QB Zane Heiss completed 5 of 12 throws for 50 yards and had two interceptions.

“It was a tough night,” McCutcheon said. “We were going against some really, really tough competition, but I thought our kids played hard.”

After the opening kickoff, Trimble drove the ball to the WHS 11, where Wright ran it into the end zone. Blake Guffey’s first of three extra point kicks made it 7-0.

Early in the second quarter, the Tomcats stretched their advantage to 15-0 when Kittle scored on a keeper and then passed to Guffey for the two-point conversion.

Waterford came back with its best drive of the game, reaching the red zone. Unfortunately for the Wildcats, Heiss’ 11-yard TD throw to Bailey McGraw was nullified due to an illegal formation.

“The refs said we had a guy who wasn’t on the line of scrimmage,” McCutcheon said. “He said he checked with the official, but that’s just the way it goes.

“It was just a bad break for us, and we just couldn’t get nothing going on offense after that.”

After the penalty was assessed, Heiss attempted another pass, which was tipped and intercepted by Fouts.

Just before the half, Downs had an interception for the Tomcats.

About midway through the third quarter, Wright scored his third TD of the game from 9 yards out. He also ran for the two-point conversion to make it 30-0 and a running clock.

Capping all the scoring, Wright had a 6-yard run to paydirt at the 8:38 mark of the fourth quarter.

“We were just a little unlucky tonight, but I was proud of my guys,” McCutcheon said.