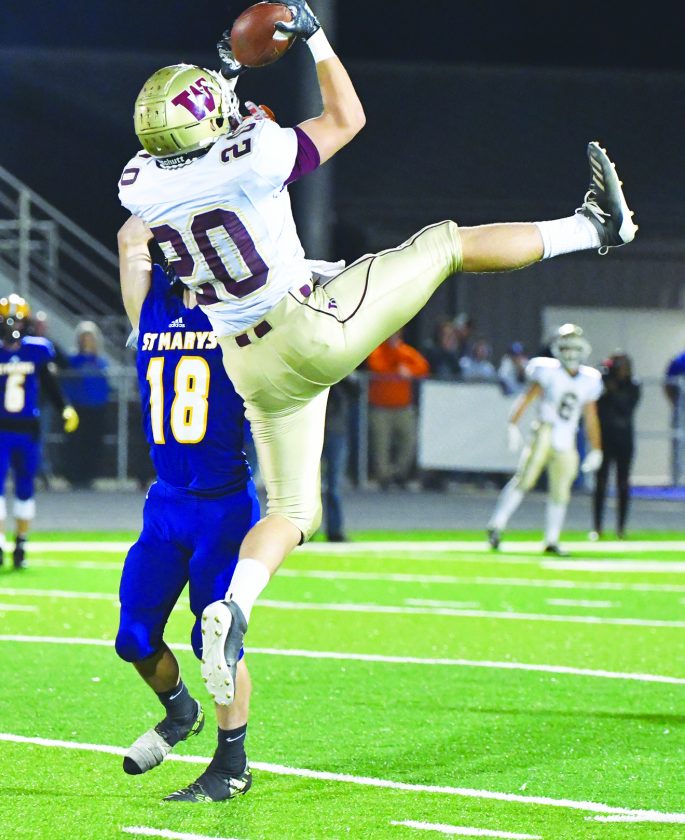 ST. MARYS, W.Va. — In a battle of Little Kanawha Conference rivals here Friday night at Bill Hanlin Stadium, No. 7 Class A Williamstown blanked No. 8 St. Marys for the first time since 2011 en route to improving to 5-1 following a 35-0 triumph.

St. Marys, which used Jason Clayton at quarterback in place of the injured Brennan Boron, was held to 108 total yards, but the Blue Devils were able to stack the box defensively.

However, that ended up allowing ‘Jacket signal-caller Brayden Modesitt to have a huge night as he finished 10 of 14 for 217 yards and three touchdown passes.

“I’m not sure. He hurt his neck a little bit,” said WHS head coach Terry Smith of tailback Ty Moore, who rushed 16 times for 38 yards as the Blue Devils allowed 138 rush yards on 35 attempts. “It seems like we had a bunch of big plays. Our line, it’s hard to block when you’re outnumbered.

“I was really glad with the effort. Sometimes when you play St. Marys, of course I’ve been doing it forever, everybody is so pumped up and after about five minutes you can’t breathe. Tonight, I think they handled everything pretty good.”

A leaping grab by Eric Brown, who finished with game-highs of five catches for 139 yards, resulted in a 26-yard gain on Williamstown’s opening possession. Later, Modesitt hit Nick Bondi for 14 yards and then found Mason Deem wide open in the end zone for a 20-yard scoring strike three minutes into the game. Josh Erb’s extra point made it 7-0.

On the Blue Devils’ first possession, Clayton was picked off by Kole Sutton, who returned it 36 yards to the Blue Devil 16. Three plays later, Modesitt found Deem open in the end zone for a 15-yard TD and it was 14-0 at the 4:39 mark.

Trevor Oates helped the ‘Jacket defense get off the field on their next series when he broke up a pass. The SMHS defense stood tall though and forced a punt thanks to Wyatt Norman batting down a third-down pass.

However, the 3-2 Blue Devils, who play at 7 p.m. next Friday in Elizabeth at Wilson-Eismon Field against Wirt County, went three-and-out, which led to a 39-yard field goal attempt by Erb. It came up short.

Modesitt, who added 63 rush yards on eight attempts, had a 24-yard gallop to help set up Brown’s 3-yard Wildcat touchdown run with 4:27 to play in the half.

Although the hosts got a 23-yard reception from Dylan Patterson, who missed the second half due to injury, a late drive stalled when Deem snared an interception. Despite having the ball at their own 14, Modesitt took a three-step drop and hit Brown in the seam as he raced 86 yards to paydirt.

“It was a quick slant and then I caught it and then I thought I’d better run fast and not get caught,” Brown explained. “I thought we did really well overall. Our line blocked really good, I thought, and gave our quarterback an opportunity to throw the ball. It was fun. I enjoyed it.”

Leewood Molessa batted down a Blue Devil pass on their last drive of the first half and the teams traded punts the next five series. In that stretch, Blue Devil Richard Dornon had a sack.

With Moore out of the game, it was Oates who broke loose for a 25-yard scoring jaunt up the gut at 8:26 of the fourth to start the running clock.

“I was pleased with Jason’s efforts,” said Blue Devil boss Jodi Mote. “I thought he stepped in and showed some strengths. As far as defense I felt like we gave up some big plays.”

Williamstown, which returns to action at 7 p.m. next Friday with a road trip to Warren, limited St. Marys to 40 yards rushing on 26 attempts.