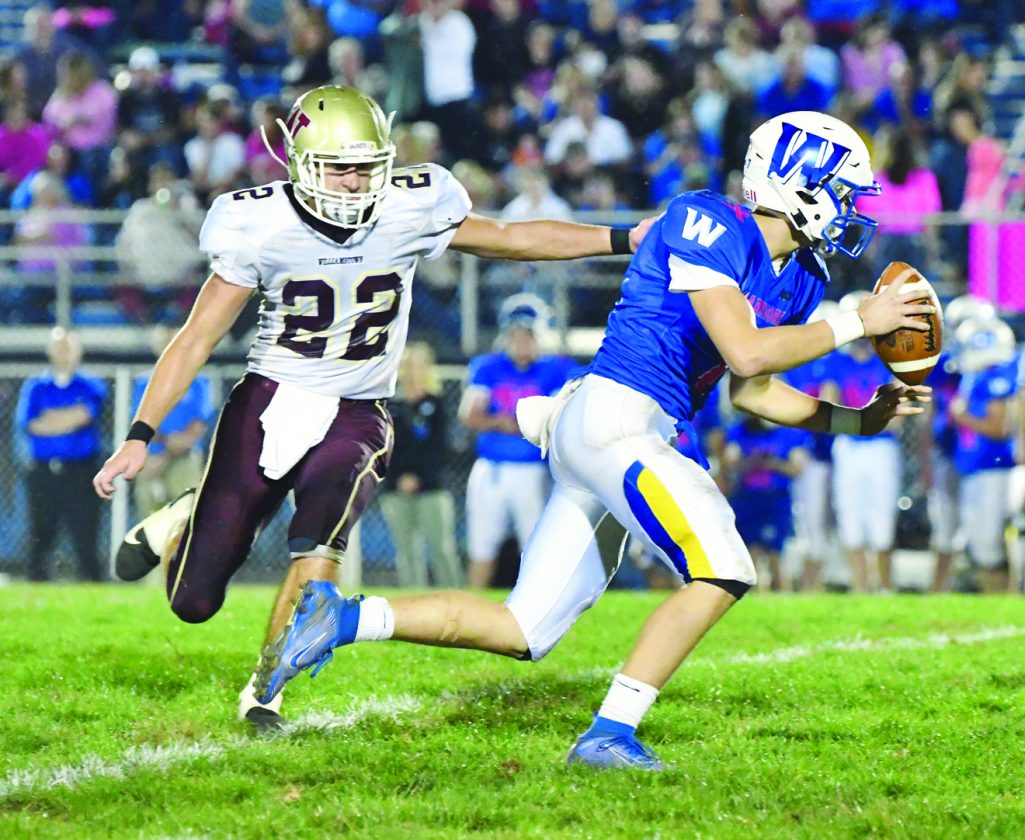 WILLIAMSTOWN — The Williamstown Yellojackets definitely needed to come out to play last week on the road in Vincent, Ohio.

Terry Smith’s ‘Jackets trailed for the first time in six weeks heading into the fourth quarter with the score at 17-13 in favor of the Warren Warriors.

But a second loss of the season wasn’t meant to be for the visiting gold and maroon.

It provided the group with a bit of needed urgency.

Ryan Walton’s group brings a similar attacking offense as Warren to the battle. The Knights have scored 70 points twice during their winning streak. They also haven’t scored less than four touchdowns in any of the matchups.

“Coaches did a good job just keeping the kids excited, letting them know to stay the course. We told the kids not get behind the eight ball as much as we already are,” Walton said. “We kept the kids positive and they bought into it. We were fortunate enough to get a couple wins and now we kind on a roll little bit.”

Williamstown’s defense will need to be on its toes all game.

The Yellowjackets struggled to stop the Warriors’ passing attack throughout the entire night, giving up a total of 302 yards and two touchdowns in the air.

Smith expects a better showing from the WHS defense after seeing some positives on film. “We gave up 300 yards on defense, you’re not going to win a lot of games with that,” Smith said. “We just hung in there, they showed a lot of determination. They were hanging in there and trying to get things done. They could have done a little bit better, but Warren was pretty good.”

“They are going to be well-coached, they are going to have athletes, they got the guys who can make plays all over the field, it is what it is,” said Walton. “They have had our number for several years and they are a good football team.”

The Silver Knights have plenty of firepower on the offensive side of the ball, though, led by running back Mark Rucker and dual-threat quarterback Gage Huffman.

Second in the Mid-Ohio Valley in rushing (1,090) and the leading rushing scorer (19), Rucker scored three times and had 223 rushing yards in the 28-14 win against Buffalo last week.

Huffman is second on the team in rushing with 543 yards and 12 TDs.

Huffman completed 7 of 16 passes for 189 yards and a 5-yard touchdown pass to freshman Jayden Helmick in the win.

“The first thing that jumps out is Rucker, you know he’s so good. You have to make sure you know where he is, he doesn’t always line up in the backfield,” Smith said. “But they also have other guys that can do some damage also. The quarterback and a couple of their receivers are pretty good.”

Williamstown counters with its own standout pieces.

Moore was once again the main ballcarrier for the Yellowjacket rushing attack against the Warriors. He amassed 264 yards on 26 carries.

Quarterback Brayden Modesitt had respectable showing under center, going 5 of 10 and 70 yards passing, along with 76 rushing yards on nine carries.

Richards and Nick Bondi each had two catches apiece, with Richards having a team-high of 33 and Bondi with 30 yards.