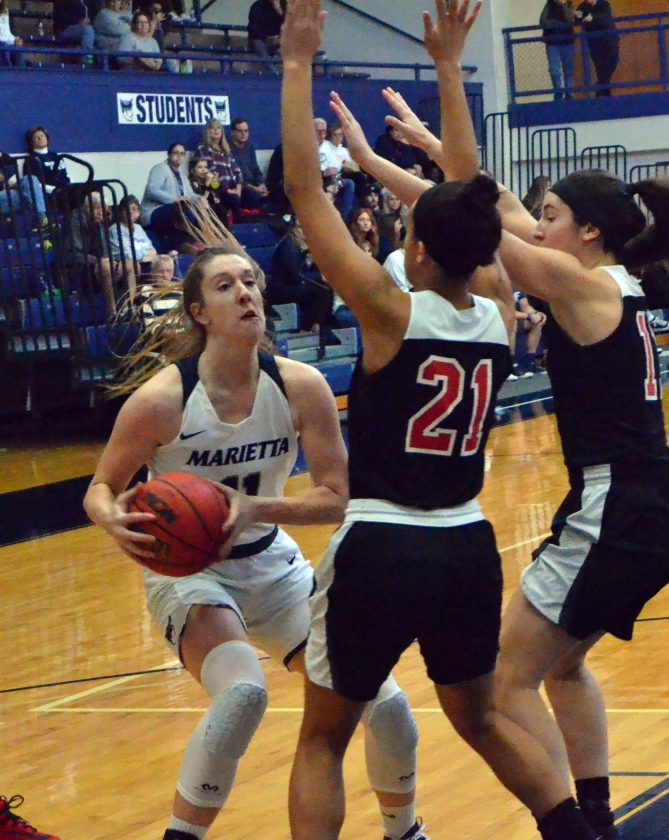 “I’ve had a couple of rough games, but my teammates have been really supportive with me,” said the 6-foot-1 Enochs. “They’ve motivated me to do better. The coaching staff has also been there for me.

“I just took it right at them (Battling Bishops) and did what I could for my team. They (teammates) got the ball to me to give me the opportunities.”

“The energy comes from my teammates,” said the 5-9 Liston. “It starts on the bench, the energy that they bring gives us energy on the court.

“Coach (Kole) Vivian tells us to take pride in each possession. So every single one of us makes sure if there’s a loose ball that there’s always at least one body or maybe two bodies diving for it. That’s what he’s instilled in us since day 1.”

Early on, Enochs scored six points to keep MC close. But near the end of the opening stanza, OWU went on a 13-0 run, which extended into the second quarter with the Bishops taking a 14-point lead (23-9).

After Hefner drained a 3 to halt the Bishop run, Marietta had a run of its own, scoring 16 unanswered points to take a 25-23 lead. During the surge, Hefner had five points; Enochs, Liston, and Taylor three apiece; and MacKenzie Campbell two.

“Down 14, we weren’t really worried,” Enochs said. “We were pretty calm. We just collected ourselves. We knew what we needed to do. We needed to get back into transition and stop them from getting easy layups.

“We picked it up, and we were really focused on the defensive end. And, slowing them down was an important key to that.”

In the third quarter, Enochs went on a tear, scoring 10 points, and helped the Pioneer take a 49-43 advantage.

“She pushed that re-set button after W&J (Wednesday night), and we needed every single point and rebound out of her today. She was great for us, and that’s what seniors are supposed to do.”

Early in the fourth period, Jill Congrove and Liston each scored three points the old-fashioned way with a made bucket and freebie to stretch the Pioneer lead to double-digits, 55-43.

With 20 seconds left, Hefner iced the game when she converted to foul shots to give the Pioneers a five-point cushion.

“This was a great team win, and I’m very excited about it,” Liston said.