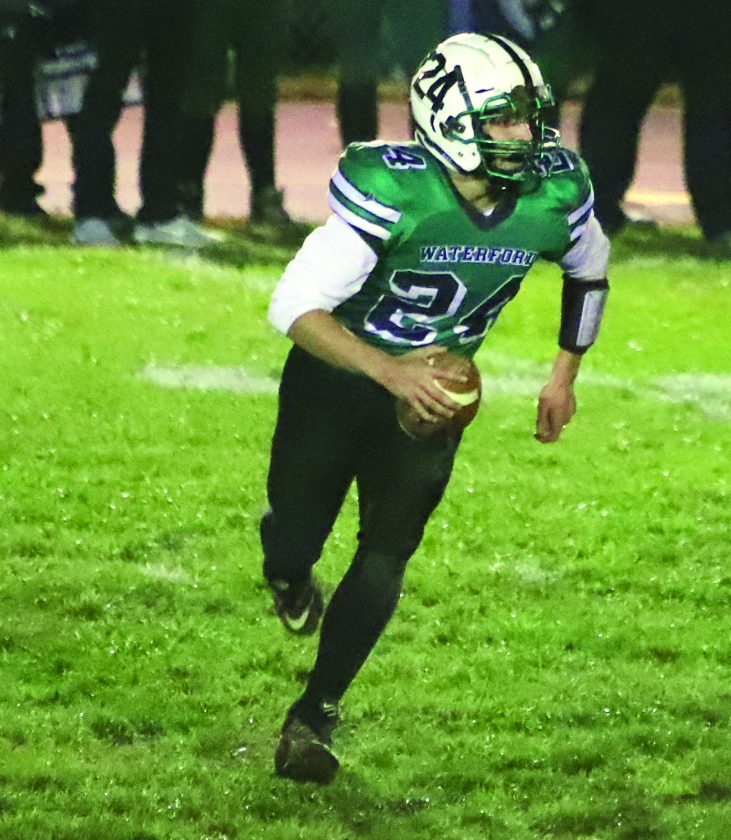 Zane Heiss battled through pain to throw for 96 yards and two touchdowns while rushing for 60 more yards in Waterford’s first-round playoff victory over Shenandoah Saturday.

Heiss finished the regular season with 617 passing yards, 640 rushing yards and 14 total touchdowns for the Wildcats en route to being named the Division VII Southeast District Offensive Player of the Year. Heiss missed some plays against Shenandoah with an injury but is ready to go for Saturday’s second-round playoff matchup against top-seeded Harvest Prep.

“He’s a dual threat for us,” said Waterford head coach Eric McCutcheon. “The kid has just come on and on. He hasn’t played quarterback full time until this year. That’s what makes him a dual threat and makes him tough for defenses to defend. He does well under pressure. He’s had a really good year for us.”

The Wildcats, who are 9-2 overall and finished second in the TVC Hocking, also had senior Nick Fouss and juniors Haden Offenberger, Cole Miller and Joe Pantelidis named first team all-district.

Fouss is Waterford’s top target in the passing game. He caught 19 passes for 422 yards and five touchdowns in the regular season.

Pantelidis is a hard-hitting linebacker who racked up 97 tackles and a sack on defense to go along with 457 rushing yards and five TDs offensively.

Waterford’s top offensive lineman is Offenberger, who helped anchor a line that paved the way for Waterford’s 1,862 yards and 30 touchdowns on the ground. Waterford averages 6.8 yards per carry and Offenberger is a huge reason for that success.

Miller is the Wildcats’ top pass rusher. At defensive end, he tallied 44 total tackles, 7 1/2 tackles for loss, four sacks and a fumble recovery.

In Division III, Matt Kimes-coached Warren had its first winning season since 2009 at 6-4. A big reason for the turnaround was the Warriors’ offense, led by a breakout season from junior quarterback Kurt Taylor.

Another weapon for Warren was kicker Joel Chevalier. After nailing 5 of 7 field goals attempts, including two longer than 40 yards, Chevalier was picked as the district’s first team kicker. He also averaged 34.9 yards on 26 punts.

Senior Chase Taylor was a force for the Tigers on both sides of the ball. As a running back he carried 89 times for 1,063 and 10 touchdowns and also caught 24 passes for 344 and a score, despite missing two games. It was on defense, though, where Taylor earned first team all-district recognition. As a linebacker, he recorded 87 tackles and two sacks.

Fellow senior Corbin Alkire was named a first team quarterback. Alkire completed 109 of 189 pass attempts for 1,182 yards, eight TDs and eight picks. He was also a threat on the ground, carrying 91 times for 386 yards and six scores.

In Division VI, Belpre earned three first teamers after a 5-5 season on the gridiron.

Senior linebacker Nick Godfrey was one of the top defenders in the area in 2019. The 6-foot-2, 225-pounder racked up more than 100 tackles and sacked opposing quarterbacks six times. For good measure, he added 645 yards and nine TDs on 94 carries out of the backfield.

Junior Jordan Harrington, selected as the district’s first team punter, averaged close to 40 yards per boot and consistently pinned opponents inside their own 20.