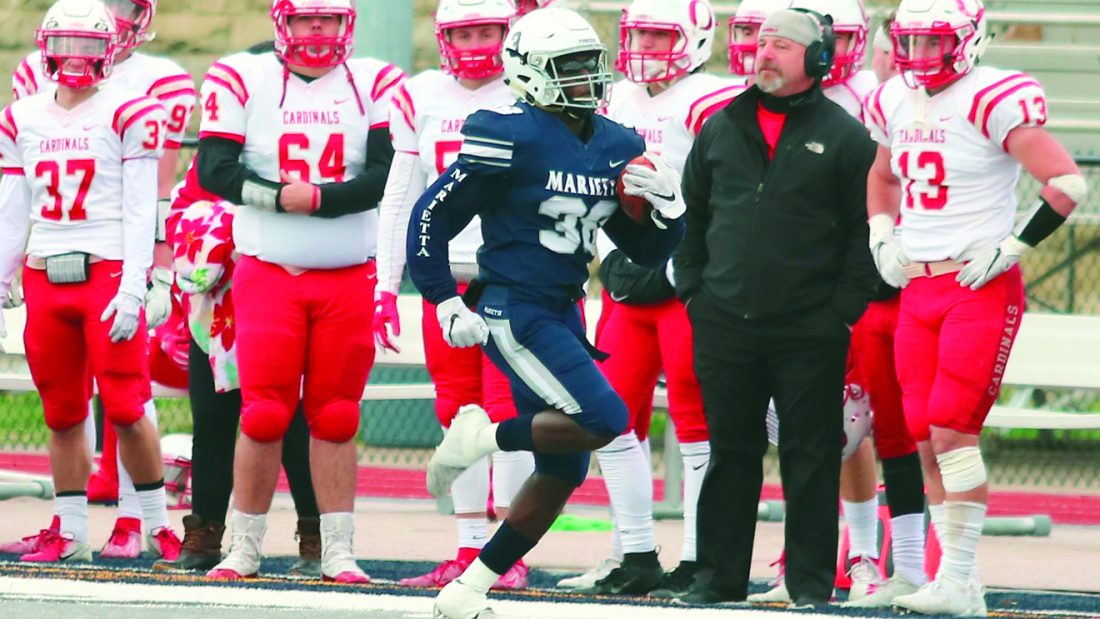 A blocked field attempt in the third quarter proved to be pivotal.

Tay Pryor got a hand on Nate Strong’s 23-yard bid for 3, and the loose ball was collected by James Knox, who raced 84 yards down the left side line to the end zone.

Later in the final seconds of the game, Knox sealed the victory with an interception.

“It was huge,” said seventh-year Pioneer football coach Andy Waddle of the block and touchdown. “James (Knox) was doing all this wearing 38, which is so special to him and the rest of the guys — and to me.”

“Those guys (seniors’ TJ West, Tanner Clark, Kyle McSweeney, Andrew Barker, and Knox) who have worn it seem to do something pretty special,” the coach continued. “And, I don’t think there is a coincidence in that. It’s pretty awesome.”

During first half action on a day honoring Veterans of the US Armed Forces, Marietta and Otterbein were engaged in a defensive battle and punting duel. After a scoreless first quarter, the Cardinals staked themselves to a 3-0 advantage in the second period on Strong’s 25-yard field goal at the 5:52 mark.

“I thought this game would be a dogfight,” Waddle said. “Otterbein’ struggled a little bit, but they’ve won two in a row. They play a tough schedule.”

Late in the stanza, the Pioneers were able to move the ball to the Cardinal 9, where McSweeney hit Justin Bell with a scoring strike with 4 seconds left in the half. The MC drive covered 64 yards on 16 plays. Jacob Griffin’s PAT made it 7-3 Marietta at the intermission.

“I think we could’ve been better about being more methodical and consistent,” Waddle said. “And when you do that, something good’s going to happen.”

After Pryor’s block and Knox’s TD, Otterbein answered with a score of its own with Matt Webb capping an 8-play, 76-yard drive with an 8-yard run to paydirt. Strong’s PAT cut it 14-10.

“On defense, we didn’t play great all the time, but when Otterbein got in the red zone, we became hard to score on,” Waddle said. “And, that’s what playing good, consistent defense can do for you. And, I think the same thing can be true offensively, too.”

Early in the fourth quarter, Marietta, capitalizing on Drake Neuberger’s fumble recovery at the end of the third, tacked on an insurance TD when freshman Bryce Agnew rushed 8 yards to the end zone. Griffin’s point after gave the Pioneers an 11-point cushion.

“On defense, we didn’t play great all the time, but when Otterbein got in the red zone, we became hard to score on,” Waddle said.

“And, that’s what playing good, consistent defense can do for you. And, I think the same thing can be true offensively, too.”

McSweeney completed 16 of 24 passes for 150 yards and one TD while his Cardinal counterpart Logan Pharmer was 25 of 50 for 353 yards.

Clark rushed for 41 yards on 13 carries to lead the Pioneers. J. Bost-Floyd gained a game-high 82 yards on the ground for Otterbein.

Austin Veatch had five catches for 50 yards and Van Meter four for 51.

George Redding led the Cards with nine receptions for 118 yards.

“We knew this was going to be a tough game,” Waddle said. “We had a couple things that went our way, and I’m just proud of the effort from our guys.”