Blue Devils pull away from Tigers, 52-28 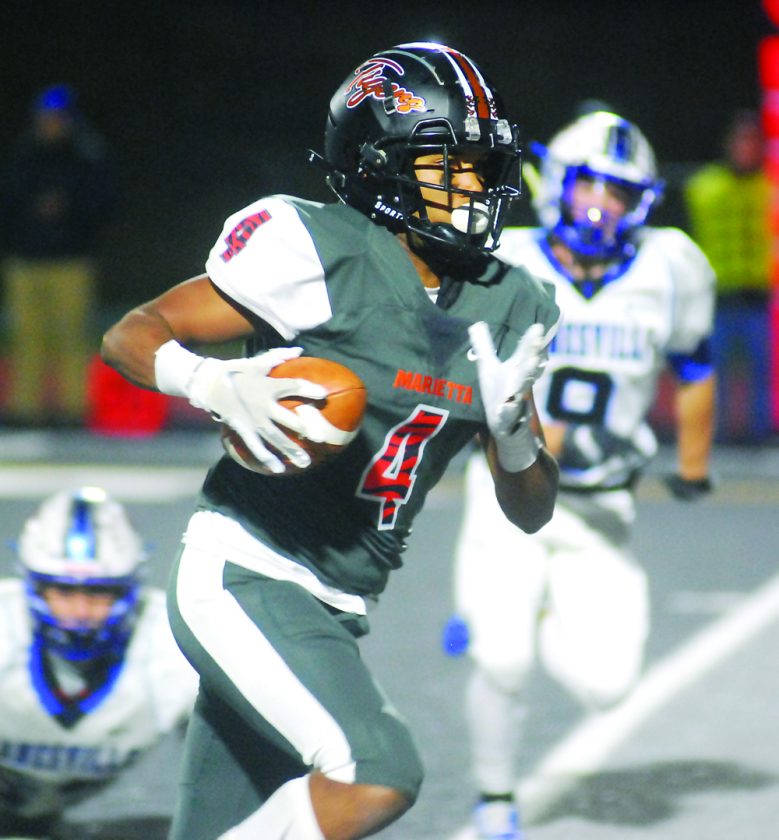 Photo by Mike Morrison Marietta’s Tony Munos (4) runs with the ball after a catch during a high school football game against Zanesville Friday night at Don Drumm Stadium. Zanesville won, 52-28.

Trailing by 24 points early in the second quarter in their season finale to playoff-bound Zanesville, it would have been awful easy for the Marietta Tigers to pack it in and call it a 2019 season.

Instead the Tigers fought and clawed their way right back into the ball game before eventually coming out on the short end of 52-28 decision to the Blue Devils at Don Drumm Stadium.

Marietta actually had the lead trimmed down to 10 points in the third period with possession of the football in Zanesville territory before eventually running out of steam.

Early on Zanesville took full advantage of some outstanding field position by scoring on their first four possessions, each of which started deep in Marietta territory.

Jordan Martin’s 1-yard run got the scoring underway for Zanesville and after a 36-yard field goal by Gabe Dolen, Blue Devil quarterback Ben Everson plunged in from a yard out to give ZHS a 17-0 lead at the end of the first quarter.

Zanesville added seven more points to their lead early in the second quarter on a 8-yard scoring toss from Everson to Jamal Wiggins and appeared to be well on their way to blowing out the Tigers on their home turf.

The Tigers found a way to get some momentum going their way when facing a fourth- and- 21 at their own 22-yard line, when senior quarterback Corbin Alkire connected on a touchdown pass with junior Tony Munos for the first score of the game midway through the second quarter.

After the Tiger defense stopped Zanesville for the first time in the game, they once again converted a long fourth down play when the combination of Alkire to Munos struck again on a 32-yard pass to cut the lead to 24-14.

Zanesville dealt the Tigers a huge blow two plays later when Jeremiah Norman got behind the Tiger secondary and Everson hit him in stride on a 58-yard touchdown pass with just 1:12 to play in the half to make it a three possession game.

“That was tough but it’s just part of football,” said Schob of the Zanesville touchdown. “We knew when we saw the film of them against Dover and (New) Philly that they had a lot of vertical threats and they just made a great play.”

Zanesville increased its lead to 24 for the second time in the game early in the third on a 13-yard run by Norman but once again the orange and black came charging right back.

A 51-yard pass from Alkire to junior receiver Reece Gerber cut the lead back to 10 before senior Kory Science’s 12-yard run on the final play of the third period made it a 38-28 game heading to the fourth quarter.

The Tiger defense came up with a huge stop on the next Zanesville possession forcing the Devils to punt for the only time in the game and the Tigers quickly moved the ball past mid-field and into Zanesville territory.

That drive stalled however and Zanesville took possession of the ball near midfield before using a fourth down play of their own to put the game out of reach.

Facing a fourth-and-10 at the Marietta 29-yard line, Everson eluded numerous Tiger tacklers and worked his way into the end zone to make it a three-possession game once again.

Two plays later Zanesville’s Isaac Mayle intercepted an Alkire pass and returned it 38-yards for a score to seal the deal and give the Devils the hard-fought win.

Everson completed 14-of-22 passes in the game for 216 yards while also leading the Devils in rushing with 56 yards on 11 carries.

Alkire put the ball in the air 41 times, completing 22 for 274 yards with three touchdowns and three picks.

Science led the Tigers in rushing with 62 yards on seven touches while Taylor eclipsed the 1,000 yard mark for the season by gaining 44 yards on 11 carries.

While Zanesville (7-3) clinched a berth in the postseason with the win, the Tigers season comes to a close with a 4-6 mark.

“All of these seniors have worked extremely hard and been a huge part of our program the last four years,” said Schob. “We are definitely going to miss them but they will always be a part of the Marietta football family.”