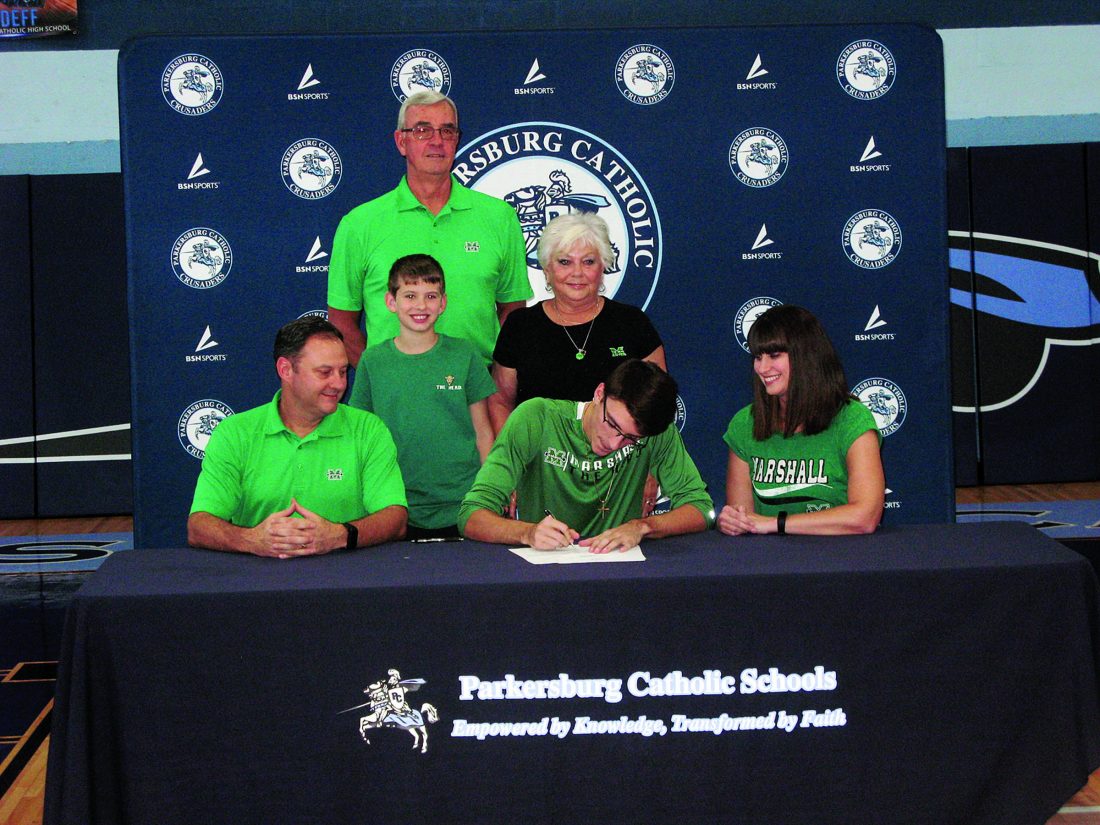 The lanky right-hander inked his national letter-of-intent to compete for the Thundering Herd in Conference USA.

Copen, also a stalwart on the basketball court, is coming off a second team Class A all-state selection at utility. Along with going 4-4 with two saves and a 2.51 earned run average in 47 1-3 innings with 84 punchouts, he also batted .326 as a junior with 16 steals, a dozen doubles, three triples, one homer and a team-high 32 runs-batted-in.

Despite having interest from other schools such as Dayton, Eastern Michigan and Toledo, the Crusader knew Huntington was going to be his home for the next few years.

Thanks to his academic work,where he currently has a 3.9GPA, Copen admitted his education “should be pretty close to free. If it’s not it won’t be a large amount of money.”

Expected to major in psychology, Copen added he expects to “mostly be a pitcher. I don’t expect to be playing any positions, but who knows.

“Right now my focus is pitching, a lot of lifting and condition for pitching. If they need me to play another position by all means I will play it.”

PCHS skipper Tom Harvey admitted Copen “has been a joy to watch the last three years or so. He’s thrown a lot for us, but we’ve tried to baby him and take care of his arm.

“This year we expect him to be a major workhorse. He was anyway. He still led us in innings.”

Admittedly, Copen explained his fastball is “kind of my go to, the 0-2, 1-2 pitch. Marshall is big on changeups. I already had the changeup in my repertoire. Right now I’m trying to perfect the changeup to get the location and the miles per hour off.”

He features both a two-seam and four-seam heater and noted his curveball basically became his second-best pitch during his freshman season.

“At this point right now I’m just looking to perfect all my current pitches,” Copen stated. “When I get to Marshall if they need me to add a pitch, I’ll add a pitch.”

Harvey really feels the sky is the limit for Copen and not just for his senior campaign with the Crusaders.

“He’s going to be our horse and we’re going to try and ride him,” Harvey added. “He’s worked really hard in the offseason every year. He’s repertoire is getting better and better. He hit 89 over the summer.

“I fully expect him to hit 90 this year. I don’t know if he’ll sit there. If he gets that breaking ball to work he’ll be tough to deal with. Marshall does a good job of getting guys and developing pitchers and getting them to the next level.”

Although PCHS is likely to have another small roster on the diamond this spring, Copen is amped for his final year.

“This baseball season definitely will be special playing with guys like Jeb (Boice) and all them,” he said. “I’m excited to attend Marshall.

“It’s going to be fun from what I know. I’m excited to go there, but I like Catholic and I love the people here. It will be bittersweet.”