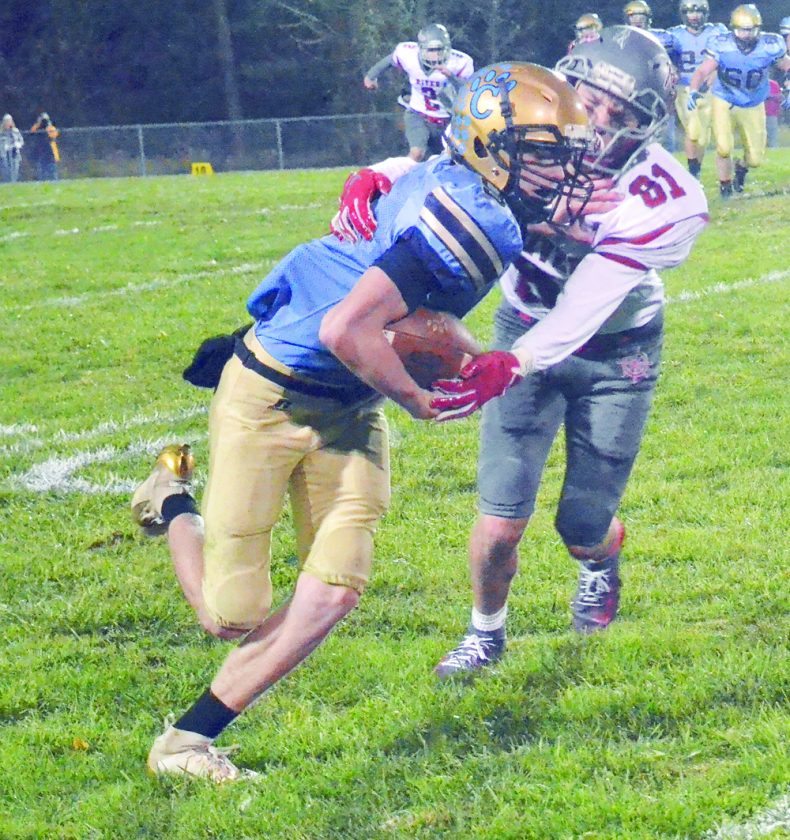 NEW MATAMORAS — Frontier High got off to a great start, but then went downhill fast.

“I’m proud of how our kids fought. When the dust settles here in a week or two, they’ll realize 7-3 is quite a dramatic improvement. That’s the best record we’ve had in 10 years, and we are moving in the right direction — and it’s still up in the air about the playoffs.”

“Right now, we’re waiting and hoping that something happens on the other end,” said RHS boss Mike Flannery. “Frontier’s probably going to go in at number eight.”

River was led by Carter Dennis, who rushed for 220 yards on 18 carries and three touchdowns.

Also scoring for the Pilots were Avery Creamer and Brody Longwell.

“That’s our identity,” said RHS boss Mike Flannery. “I mean, that’s what we try to do. We got about four nice backs and a quarterback who can throw it and keep you honest anytime he needs to. We’ve got some tough looking linemen, and I think we handled the line of scrimmage.”

Defensively, Kalyb McQueary had an interception and Tanner Smith a fumble recovery.

After receiving the opening kickoff, Frontier resorted to some trickery on the first play from scrimmage when Schmidt pitched the ball to Snyder, who hit Hoff with a 49-yard scoring strike.

“We were able to pull a couple of thing out there early and the kids executed,” Morris said.

River had an answer for that, though, on its first offensive possession. Running between the tackles, the Pilots moved the ball to the FHS 5, where Dennis scored the equalizer, and Zach Hocutt’s kick made it 7-6.

Frontier then moved the chains and reached the RHS 7. But on fourth and goal, the Cougars were stopped and turned the ball over on downs.

The Pilots needed only two running plays to stretch their lead to 14-6 on Johnson’s 32-yard run.

Near the close of the opening period, Johnson intercepted a Schmidt pass, and River capitalized when Dennis raced 38 yards to paydirt. Hocutt’s boot made it 21-6.

Early in the second quarter, Frontier cut it to 21-12 when Schmidt passed 10 yards to Hoff.

Just before the half, after FHS turned the ball over on down, River drove to the Cougar 3, where Johnson’s short run and Hocutt’s kick made it 28-12.

Capping all the scoring in the contest, Creamer scored a TD from six yards out with 3:45 left in the fourth quarter.

“Now, one of us is going to go home and get basketball-ready, or play one more week and hopefully more than that,” Flannery said.

“They did an excellent job, playing hard and setting a good example,” the Cougar coach said. “They’re excellent young men. The success we had this year and the success we’re going to have down the road, they’ve been a key factor in that.”