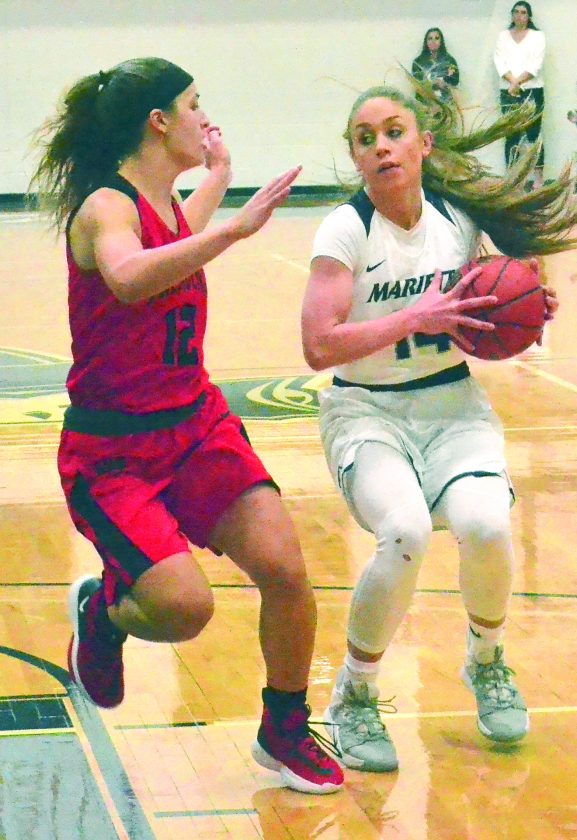 “I was very nervous,” said the 5-foot-7 Pioneer sophomore of the winning foul shots. “My heart was pounding like crazy. I shot them quick, because I don’t like to think about it.”

Hefner, who played her freshman year at Ohio Wesleyan before transferring to MC, finished with a game- and college career-high 22 points. She said she thought she scored 31 points once at South.

“Well, we knew she was pretty good,” said fourth-year Marietta head coach Kole Vivian. “I think she’s going to have some more games like that. She can make jumpers. That’s for sure.

“We’ve never had a transfer since I’ve been here. She works her tail off, and is learning how we do things here. This is her third system in three years.”

Jill Congrove added 13 points for the Pioneers, who improved their record to 1-2 on the season. Kate Liston and Alexis Enochs each netted seven markers while Marlo Taylor grabbed nine rebounds for the winners.

“We definitely wanted this one,” said Vivian of MC’s home opener and first victory of the campaign.

Washington & Jefferson (3-1) was paced by non-starter Maria Lawhorne’s 14 points and 11 rebounds. Lauren Gilbert and Alie Seto chipped in with 11 and 10 markers, respectively, while Hannah Johnston and Piper Morningstar had 9 apiece. Seto had collected nien caroms while Johnston had eight.

The contest featured 14 lead changes and 11 ties. No team was able to get a double-digit advantage. Marietta’s biggest lead was six while W&J’s was four.

Hefner scored six points in the opening stanza and finished with nine at the half as the Pioneers and Presidents battled to a 25-25 tie. Knotting the game in the closing seconds was Enoch’s putback.

“This game, I was really focused on getting my teammates open,” Hefner said. “And, if I was open, I was shooting it. I had more confidence tonight.”

Then, after Luce Duritza’s deuce and bonus freebie, and driving layups by Congrove and Hefner, Marietta stretched its lead to 47-41.

The Presidents countered that with a 9-2 run and a one point advantage.

But it was short-lived as Congrove and Liston buried back-to-back threes to give MC a 55-50 lead.

Down the stretch, Taylor knocked down two free-throws with 23 seconds left to give the Pioneers a 57-54 cushion.

Gilbert, however, erased that deficit when she converted three at the line with 6 seconds remaining.

But on the return trip down the court, Gilbert fouled Hefner, who swished the two that won the game.

“Devin had a good drive and got in the lane,” Vivian said. “We definitely needed it.”