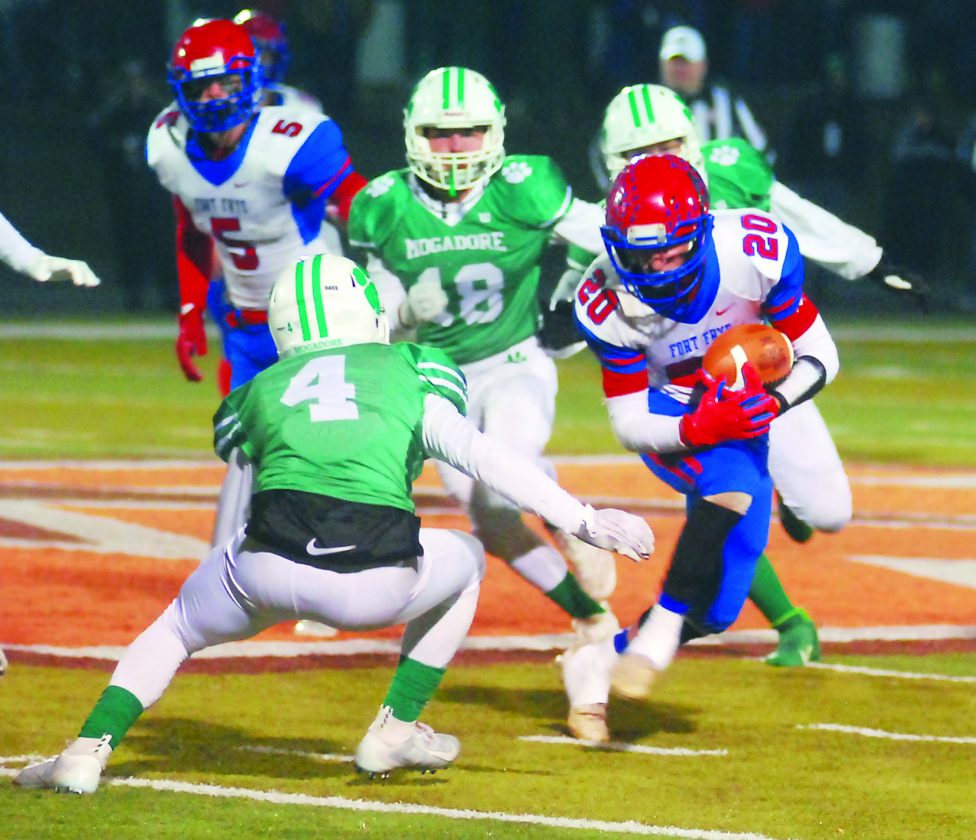 BYESVILLE — Fort Frye was a minute and a half away from claiming Friday night’s Division VI, Region 21 semifinal against Mogadore at Meadowbrook High School and advancing to their second straight appearance in next week’s regional championship game.

The Cadets’ dreams turned into a nightmare and came to a devastating end when the Wildcats scored 15 points in the final 1:31 of the game to rally for a 21-14 win.

Fort Frye held a 7-6 lead at halftime thanks to a 3-yard touchdown run in the second quarter by senior Zane Wallace and added seven more to it late in the third quarter when senior Tyler Fisher scored on a 27-yard run.

Mogadore could not get much going against the Cadet defense for much of the second half as Fort Frye came up with three turnovers on intereceptions by Caden Fryman, Nick Hart and Wallace.

After a Fort Frye drive stalled in their own territory, Mogadore had one last chance to tie the game when they took over possession of the ball at their own 41-yard line with just 2:31 to play in the game.

Facing a fourth-and-four at the 48, it appeared the Fort defense had come up with the game-clinching stop when they knocked a Will Popa pass away from a Mogadore receiver, but they were whistled for pass interference which extended the Wildcat drive and moved the ball into Fort Frye territory.

The Wildcats used a hook-and-ladder play when Popa fired the ball to Nathan Stephenson, who then pitched it back to Dylan Jones who ran 12 yards to move the ball to the Cadet 24-yard line.

A 21-yard pass from Popa to Stephenson moved the ball inside the 5 where Jones carried it in for a 4-yard touchdown to pull the l’Cats to within two with 1:31 to play.

Popa found Tave Constantine in the end zone for the two-point conversion to tie the game at 14-14.

With a timeout left and a minute and a half to work with, the Cadets still had plenty of time to answer the Mogadore score. However, a pair of incomplete passes and a run by Fisher came up short, forcing the Cadets to punt the ball back to the Wildcats with less than 30 ticks remaining on the clock.

Mark Dillon came up with the play of the season for the Wildcats when he broke through the line and blocked the punt by Ian Ellis. The ball was recovered by Mogadore at the Cadet 13-yard line.

Tyler Knight carried the ball 10 yards to the 3 and then delivered the devastating blow when he plunged into the end zone to give the Wildcats the 21-14 lead with just under 13 seconds left on the clock.

“We thought when we watched the tape of them that we might get a chance to block a kick,” said Mogadore head coach Matt Adorni. “Number 20 (Dillon) has been pretty good at blocking kicks all year. He’s a lanky basketball guy and he made a great play when we needed it the most.”

The Cadets could not make anything happen on the ensuing kickoff and just like that their perfect season had came to a jarring close.

“I’m really proud of the way our guys played and I thought we definitely could have won that football game,” said Cadet head coach Eric Huck. “We just let it get away from us at the end.”

Adorni was thrilled to escape with the win against a team that impressed him on film and even more so in person.

“It’s a cliche to say you hate for any team to lose tonight but they were such an impressive team,” said Adorni, whose team advances to play top-seeded Springfield next week at a site to be determined. “They remind me of us the way they were disciplined, you could tell their kids play the game hard, they have multiple guys running the ball, the linemen firing off old school and their kids hustled. We knew this was going to be a dogfight and it sure was.”

The loss brought a heart-breaking end to a Cadet squad that graduates six seniors who posted an incredible 45-5 record in their four years with all but one of those losses coming in the playoffs.

“All six of these seniors have pretty much been starting since they were freshman and sophomores and they have done so much for our program and been such a big part of it,” said Huck of Cadet seniors Fisher, Fryman, Wallace, Brady Schilling, Isiah Jones and Kadin Six. “I hate for them to go out like this but I’m going to really miss them and they are all tremendous football players.”

Knight led the way for the Wildcats (11-1) with 95 yards on 17 touches while Stephenson caught six passes for a game-high 80 receiving yards.