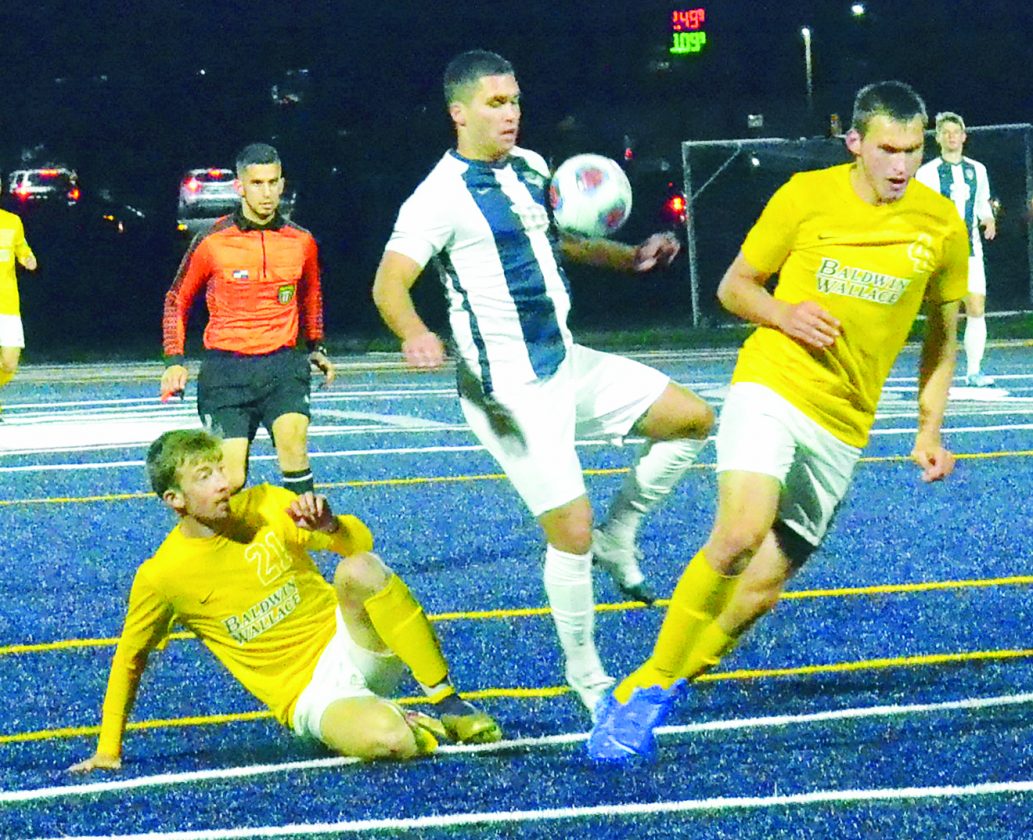 Marietta College has clinched a berth in the Ohio Athletic Conference men’s soccer tournament for the sixth straight year.

The Pioneer booters, in a must-win situation in their regular-season finale, never trailed en route to a 3-1 triumph over visiting Baldwin Wallace Saturday night at Marietta Field.

“This was a win and we’re in, and we came out on fire,” said seventh-year MC boss Joe Bergin, whose Pioneers kick off OAC tourney play on the road at Ohio Northern in a quarterfinal match at 7 p.m. Tuesday.

“The seniors (Trevor Dykstra, Cole Pappas, Luke Maher, Austin Fligor, Sebastian Ziaja, and Matt Montgomery) led us, and I’m very proud of what they were doing,” Bergin added. “Now, the trick is to let’s go get one and another one and another one. I don’t care where we go Tuesday. We’re just happy as heck to be there.”

Marietta (9-8-1 overall, 4-4-1 OAC) got goals from Maher, Gavin Long, and Jovonni Auddino. Robert Phillips and Caden Ferguson each had an assist, while Dykstra was credited with three saves, all in the second half, between the pipes.

Baldwin Wallace’s lone goal was by Shaheen Ghahremani with Danny Ruple assisting in the second half. Keeper Patrick Mehal had four saves.

“We took their (Yellow Jackets) best shot at the start of the second half,” Bergin said. “You’ve got to give them some credit. They came back after getting no shots in the first half. They put it to us in the second half.”

MC applied all kinds of pressure on BW in the opening half, outshooting the Jackets, 7-0. During the 16th minute, Maher put the finishing touch on a Phillips’ cross from the right wing to make it 1-0, also the halftime score. The goal was Maher’s third of the season.

After the break, Baldwin Wallace went on the attack and in the 50th minute got the equalizer when Ghahremani booted home Ruple’s right-side corner kick.

“They adjusted at halftime,” Bergin said, “and did some things…but what it did is it opened the game up, and our skill guys could get on the ball with a little bit more space.”

The Pioneers regained the advantage, 2-1, in the 72nd minute when sophomore Gavin Long collected a through-pass from Ferguson and beat Mehal with a shot into the right side of the goal. On the season, Long, a native of Surrey, United Kingdom, leads the team in goals scored with eight.

About three minutes later, MC got an insurance goal on Auddino’s unassisted score from the top of the 18-yard box. Mehal never had a chance on the shot, which ended up in the right side of the goal.

Ron Johnston can be reached at rjohnston@marietta times.com