Pioneers to host the Mount on Senior Day Saturday 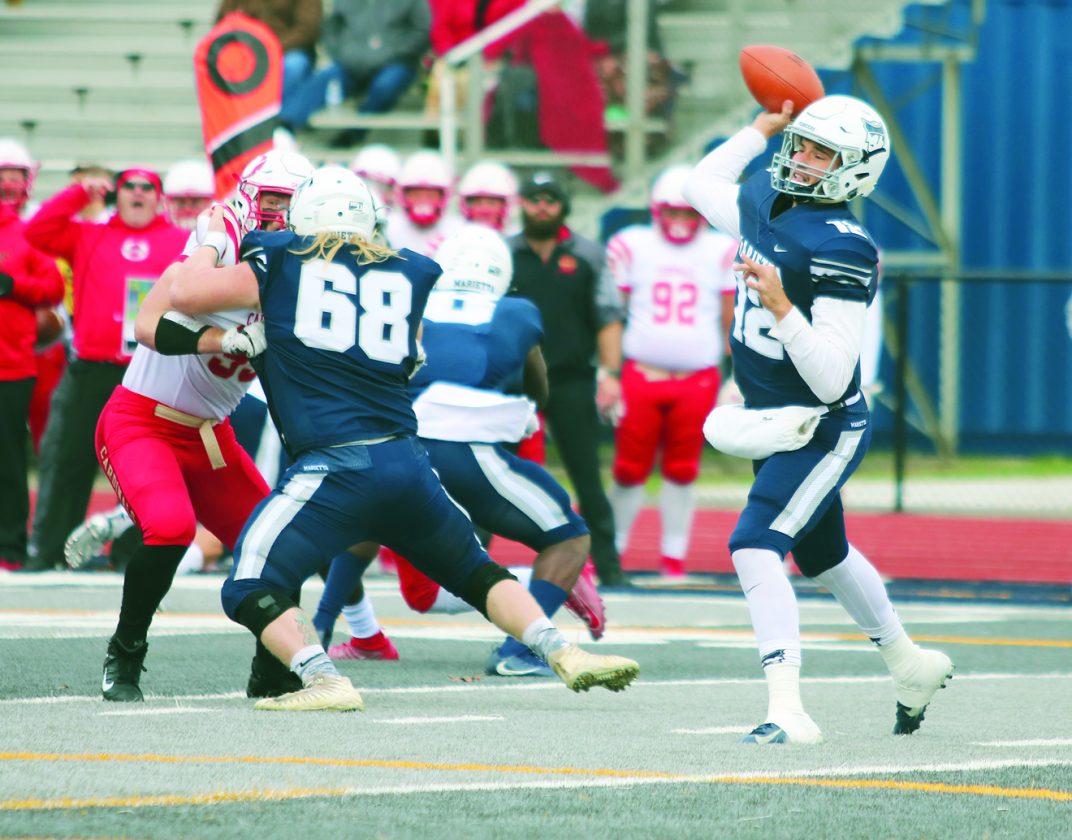 Marietta College will be seeking its first gridiron win against the University of Mount Union since 1977.

To say the underdog Pioneers are long overdue for a victory would be an understatement.

But seventh-year head coach Andy Waddle and his team are looking forward to the challenge of ending the Purple Raiders’ domination on Senior Day this Saturday at 1:30 p.m. at Don Drumm Stadium.

MC seniors’ Tanner Clark, James Knox, TJ West, Kyle McSweeney, Andrew Barker, and Ryan Van Meter all will be recognized. And, Van Meter, like his fellow seniors before him, will be wearing the number 38 jersey to honor teammate Joel Wunnenberg, who died unexpectedly in March of 2017.

Vince Kehres-coached Mount Union is ranked No. 1 in the D3football.com Top 25, and No. 2 in the AFCA Coaches Poll to defending NCAA Division III champion Mary Hardin-Baylor of Belton, Tx.

Last Saturday, the Raiders (9-0 overall, 8-0 OAC) earned a share of their 30th Ohio Athletic Conference championship and their 31st trip to the D3 football playoffs with a 51-3 triumph over the University of Muskingum at Mount Union Stadium.

MU is one of 11 undefeated Division III football teams in the nation.

“We’re just going to practice as hard as we did last week,” said Marietta junior DB Tay Pryor. “Then, come out here and do some big things.”

“Our guys came to Marietta to compete in the OAC, a great conference,” Waddle said. “And we’ll be going against a great football team.”

Marietta is coming off a 21-10 win against a scrappy Otterbein University ballclub at DDS last Saturday. McSweeney passed for 150 yards and one touchdown to sophomore Justin Bell. Knox, after scooping up Pryor’s block of a Cardinal field goal attempt, scored a special teams TD on an 84-yard run.

Going into the Mount game, Clark is 105 rushing yards shy of 1,000 for the season. Last season, the former Caldwell Redskin gained 1,446 rushing yards.

Barker — who was injured against Otterbein — is the school record holder for career touchdown receptions with 22. He needs one more TD catch to break the school single season standard of eight.

Doing the bulk of the ball carrying for the Raiders will probably be junior running back Josh Petruccelli, a 1,000-plus yard ground gainer.

A couple of MU pass catchers who the Pioneers will need to keep tabs on will be sophomore Wayne Ruby, Jr. and senior Justin Hill.

Defensively, Mount has allowed only three first-quarter points to opponents all season long.

“We’re going to give them everything we got,” Waddle said.