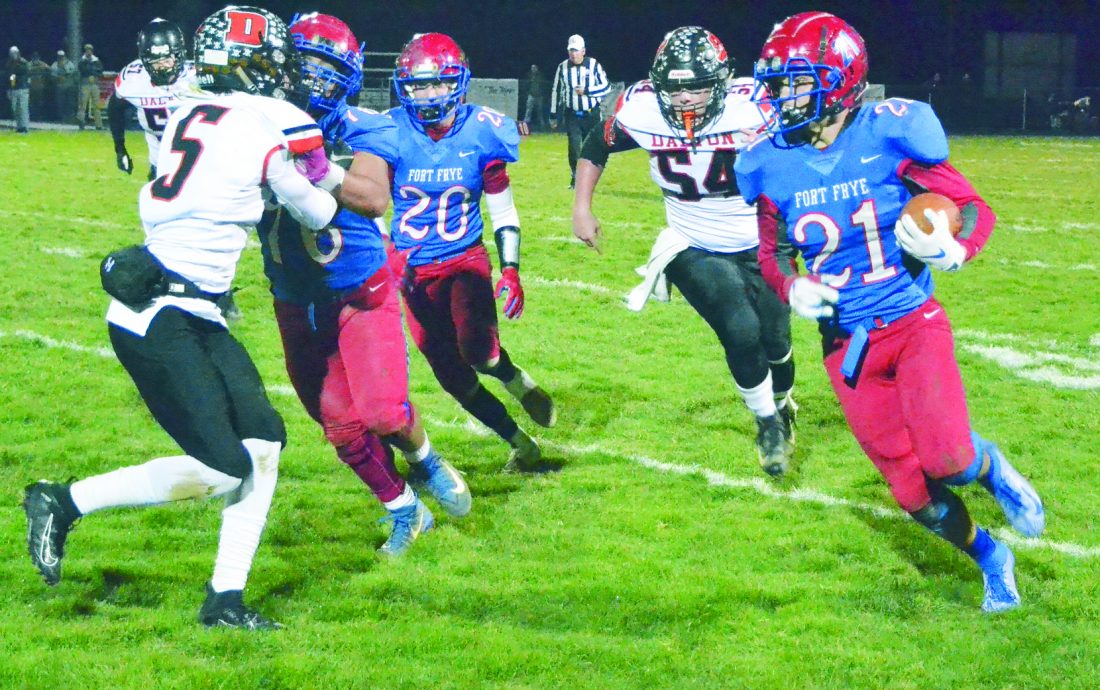 But that’s not all as the senior running back rushed for a single-game career-high 202 yards and two more TDs to lead the Cadets to a 48-39 triumph over visiting Dalton High in an OHSAA Division VI quarterfinal football game Friday night.

“That wouldn’t have happened if we didn’t have a great offensive line,” said the 5-foot-10, 170-pound Fisher of the 98-yard score in the first quarter. “They made a big hole. And it felt good.”

Fisher also had TD runs of 56 yards and one yard.

Oh, yes, on defense, he recovered a fumble.

“I was not expecting that one,” said Fisher of the recovery.

FFHS running back Zane Wallace, who was injured in the third quarter, added an 8-yard TD run.

Cadet booter David Kitts was 6 for 6 on extra point kicks.

Defensively, Nic Hart, Schilling, and Adkins each had a pick, while Medley also recovered a fumble.

“Our defense gave up some yards,” said Fort Frye head coach Eric Huck. “But when they needed to make a play, they did it.”

Jaiden Malone finished with eight receptions for 198 yards and two scores. Adam Jarrett and and Dillon Horst each added a TD catch.

On the ground, Jaden Schlabach gained 94 yards on eight touches. Jarrett also had a rushing TD.

“They’re a good football team,” said Huck of the Bulldogs. “We’ve been saying all week that they have some explosive players and can make plays.”

After the opening kickoff, Dalton staked itself to 7-0 advantage when Bidlack hit Malone with a 32-yard scoring strike and Adam Knetzer kicked the PAT.

But Fort came right back to knot the score, though, on Wallace’s 8-yard run to paydirt and Kitts kick. The TD was set up by Adkins’ 57-yard run.

The Bulldogs regained the advantage on Bidlack’s 15-yard TD throw to Jarrett.

But once again, the Cadets had an answer and tied the score a second time, 14-14, on Fisher’s 98-yard dash to the house. The TD was made possible thanks to a Medley fumble recovery on the 2.

“That was big, right at the beginning of the game,” Huck said. “They (Dogs) were about ready to score and we got a turnover. Then, we ran a trap for 98 yards. That was huge.”

Right before the end of the first quarter, Dalton took the lead a third time on Bidlack’s 5-yard keeper, making it 21-14.

Early in the second period, Fisher swept right, followed his blockers, and raced down the sideline to the end zone, and Kitts’ boot made 21-all.

One again, though, the Bulldogs responded with a TD on Jarrett’s one-yard run. But kicker Adam Knetzer’s boot was wide left, and DHS led 27-21.

With 5-25 left in the stanza, Ellis hit Isner with a 19-yard scoring strike, and Kitts’ kick gave the Cadets their first lead of the contest, 28-27 — and they would never look back.

Dalton answered with an 86-yard TD pass from Bidlack to Malone. The Dogs were unsuccessful, though, on the 2-point conversion pass.

In the fourth quarter, Fisher scored on a 1-yard run, and on a razzle-dazzle play, Schilling hauled in a 20-yard TD pass from Ellis.

Capping all the scoring in the game, Horst caught a 35-yard TD toss from Bidlack.

“I’m just real proud of the way on both sides of the ball, our guys stepped up and made big plays when we needed them,” Huck said.

Added Fisher, “It was a dog fight.”