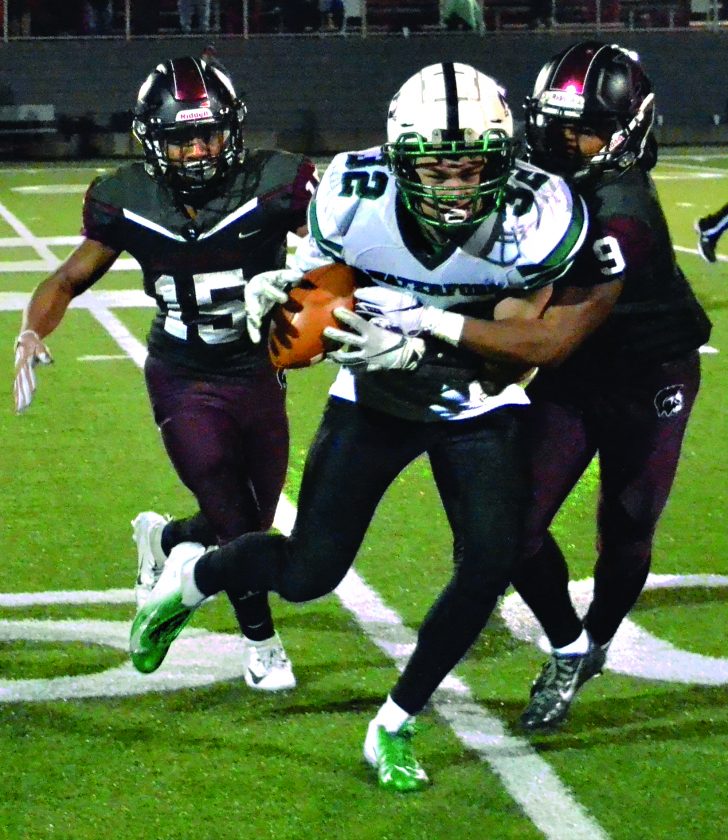 “I don’t know if it was the cold weather or not, but those three turnovers got us,” said WHS head coach Eric McCutcheon. “But that happens. It’s a part of the game.

“You’ve got to play almost perfect, especially against a team like this. They’re the number one seed for a reason, but we battled them hard, and played with great energy.”

Harvest Prep (11-1), No. 4 in the Nov. 4 Final AP State Poll, advances and is scheduled to play second seeded Newark Catholic (9-3) in a regional final at 7 p.m. Saturday at a site to be determined. Newark Catholic blanked Shadyside, 40-0, in another semi Saturday evening.

The Milan Smith-coached Warriors were led by 5-foot-6, 175-pound senior quarterback/running back Javon Eggert, who rushed for 175 yards and five touchdowns.

“He had five touchdowns?” McCutcheon said. “Gee-whiz, he was a speedster.

“We knew we had to try to contain him but he got his yards.”

“Zane and I just have that good chemistry,” Fouss said.

Then, with under a minute left in the opening period and after getting good field position on a Wildcat punt, the Warriors moved the ball to the WHS 14, where Eggert covered the remaining distance and Mungia’s PAT stretched the lead to 14-0.

Waterford cut it to 14-7 just before the half when Heiss hit Fouss with a scoring strike. Gavin Brooker booted the extra point.

“We had a golden opportunity, being down only seven at the half.” McCutcheon said. “They (Warriors) took some stuff away from us and we tried to counteract it.

“Our offensive line and our seniors stepped up. That’s what they needed to do.”

Early in the third quarter, Waterford fumbled again, and it was recovered by Harvest Prep in WHS territory. Fortunately for the Cats, the Panthers ended up turning the ball over on downs.

But then HP senior Elijah Rogers recovered a fumble on the WHS 5-yard line. A couple of plays later, the Panthers extended their lead on Eggert’s third TD of the contest, a 1-yard run.

Midway through the fourth quarter, Harvest Prep got good field position on a bad snap from center by WHS to Heiss, the punter. Heiss was still able to get the kick off to about midfield. From there, the Warriors drove and got inside the 5 where Eggert scored on a 4-yard run. After the PAT, they led 28-7.

But Waterford answered that with a TD of its own when Heiss connected with Miller in the end zone, 25 yards away, to make it 28-13.

Harvest Prep, on the strength of QB Josiah Carroll’s and Eggert’s running came right back and scored on the latter’s 15-yard run, making it 35-13.

Waterford, however, was still offensive-minded and capped all the scoring in the game on Heiss’ 15-yard TD pass to Fouss with 40 seconds remaining. Dailey ran for the 2-point conversion.

“Zane and I kind of locked eyes on that one,” Fouss said. “I saw him rolling out, and he heaved it up. I extended my arms and tried to toe tap that one.”

“I’m so proud of all of my guys,” McCutcheon said. “We fought and fought all year long. We’ve got a bunch of fighters. We got better every game. They were an exciting group of kids, and I’m going to miss the seniors. We had a great run.”

Fouss agreed and added, “It hurts a lot losing tonight, but we’ve just got to move on — and now we’re going on to basketball.”