Waterford comes back to beat Belpre, 26-16 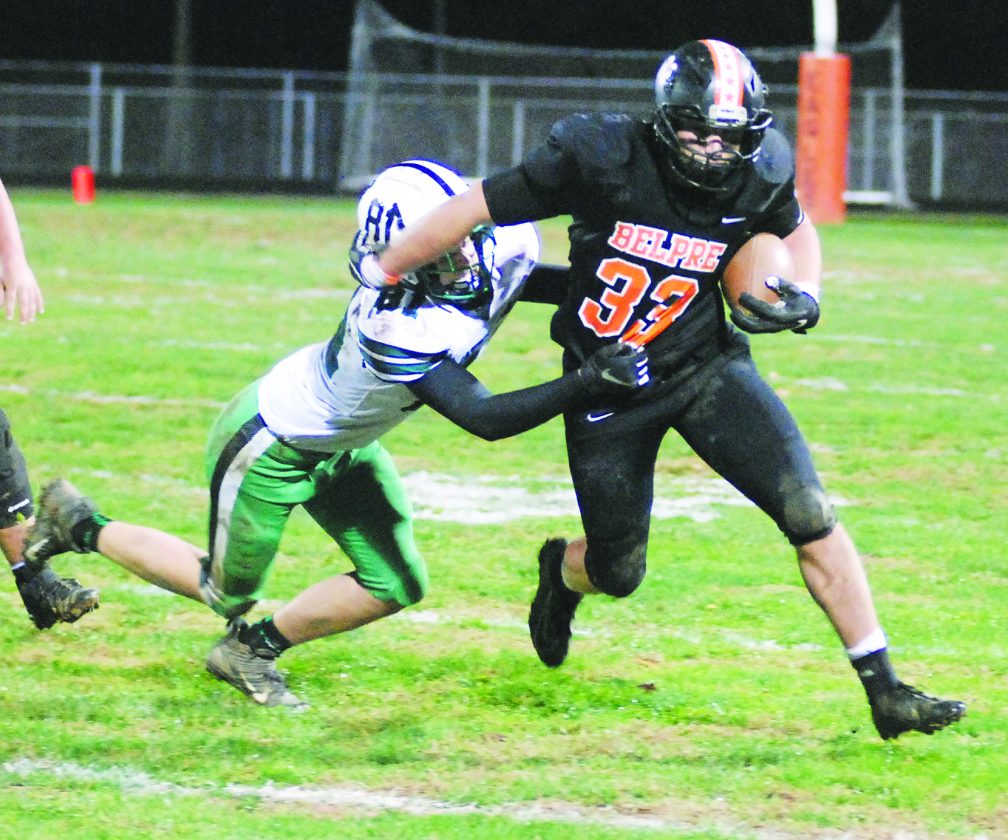 “Every moment of that game I was yelling at the team and telling them to get fired up because we needed this,” said the senior signal-caller Heiss, whose 9-yard dash with 2:32 to play sealed the Wildcats’ fourth straight victory versus Belpre.

“Belpre came out hard. I got to give props to them. I’m just so glad we stayed with it. The first half was a little iffy and then we had a few mental mistakes. I’m more than happy we got the result we did.”

Second-year BHS head man Mike DeVol’s club led 14-7 at intermission and caught a huge break on Waterford’s first drive of the second half when a fourth-down snap went well above the leaping arms of punter Gavin Brooker. Although he finally tracked down the ball and even attempted to make a pass, Golden Eagle freshman Louden Wolfe pounced on it at the 5.

Disaster struck three plays later on third-and-goal at the 1 when Belpre quarterback Walker Feick lost the ball and Grant McCutcheon recovered. Nick Godfrey’s third-down tackle on Holden Dailey, who had 14 rushes for 56 yards, forced a punt, but Brooker wasn’t able to grab it cleanly and when he went down to a knee and picked the ball up in the end zone, Belpre got a safety and led 16-7 with 4:03 to go in the third.

Despite getting the ball back at the ‘Cat 43, Belpre was forced to punt. The snap sailed well past punter Jordan Harrington, who eventually ran it down for an official 34-yard loss when he was tackled by Cole Miller.

Although Godfrey had a huge sack on third down to force a fourth-and-12 play at the Belpre 26, Heiss managed to find Luke Teters for a key 17-yard gain. Heiss eventually bulled in from the 1, but a bad snap on the PAT made it a 16-13 affair with 10:55 remaining.

The WHS defense then forced a quick three-and-out and on the first play from scrimmage coach McCutcheon called a wrap-around draw out of the shotgun, which Joe Pantelidis housed without being touched from 68 yards away for a 19-16 advantage at the 8:54 mark as once again a bad snap resulted in no conversion.

Waterford, which will carry an 8-2 mark into next week’s Division VII, Region 27 playoff game, had a huge stand on its next defensive series. Logan Adams, who had game-highs of 24 rushes and 89 yards in the loss, was held to no gain on fourth-and-a-foot at their own 38 with 6:57 to go. Following an unsportsmanlike conduct penalty, the Belpre defense forced a fourth-and-6 play from its own 19, but the Golden Eagles jumped offside and Heiss converted a fourth-and-1 sneak by the nose of the ball and then scored three plays later.

“We regrouped and told the guys we are going to be men in the second half. We’re going to come back, be men and win this game and they did. The defense played outstanding. We came up with a couple nice plays on offense to get our speedsters into the open field.”

The Golden Eagles were heading toward the WHS red zone on the game’s first drive, but Shawn Tabler fumbled and Grant McCutcheon recovered. However, the Wildcats gave it right back two plays later on a bad snap, which Golden Eagle Gage Clark recovered. Tabler ripped off a 28-yard jaunt on the ensuing drive, which culminated with Adams’ 4-yard TD run and a 7-0 lead at 6:06 of the first following Tyce Church’s extra point.

Even though Foster Brand had a sack to help thwart Waterford’s next drive, Belpre went three-and-out and Heiss broke a pair tackles on his 40-yard touchdown run late in the first. Adams’ second TD, a 5-yarder at 8:26 of the second, put the hosts back ahead.

“I am very proud of these guys,” coach DeVol stated. “They’ve gotten better in the last few years and we are going to continue to get better in the future.

“You know, maybe I have to do a little better job coaching so we’ll try that. It’s our mindset. We are as good as anybody we play and we have to believe that, but I love these kids.”