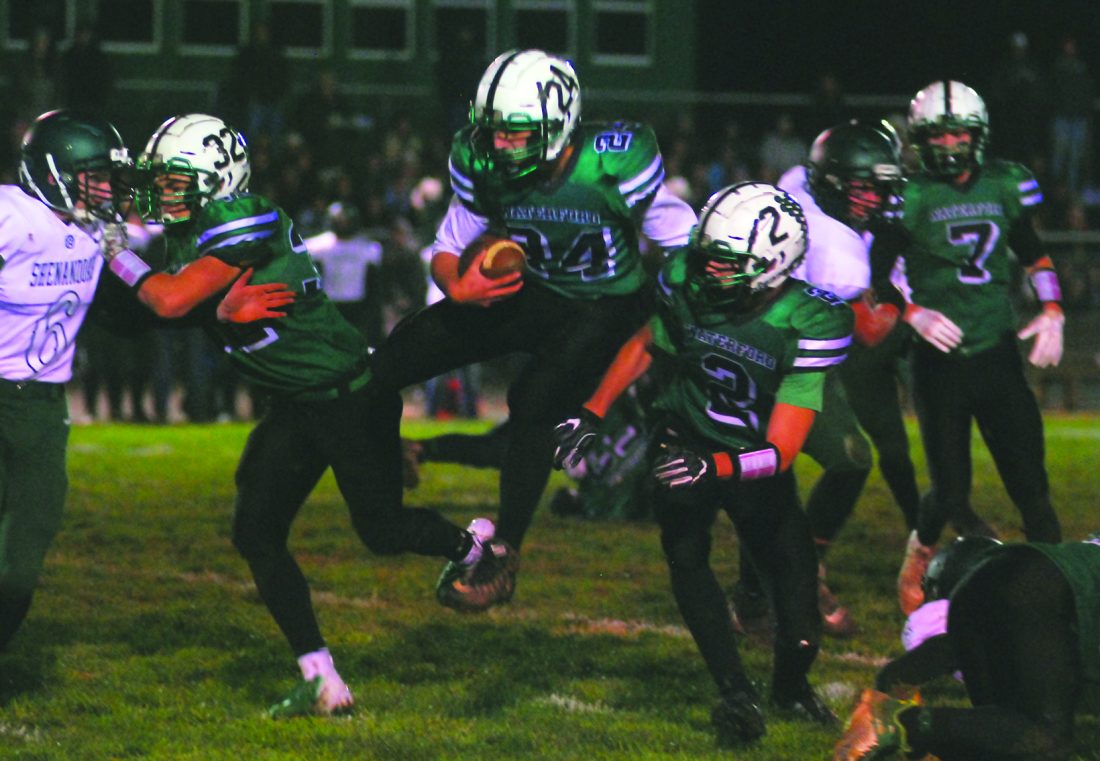 The Zeps proved no match for the Wildcats after the halftime break though as Waterford scored four touchdowns in a row in the second half en route to a 48-30 win.

The two teams played to a 22-22 tie at halftime before Waterford completely dominated the second half to advance to the quarterfinals for the second consecutive season and the third time in the past four.

Sophomore Holden Daily accounted for three Waterford touchdowns while junior Joe Pantelidis added a pair as the Wildcats improved to 9-2 on the season.

“We knew they were going to be physical and it was a very physical game,” said Waterford head coach Eric McCutcheon. “We went to the whistle and battled and battled. We went into halftime and made a couple of adjustments. We knew we could move the ball on them we just had to be fundamentally sound and we were in the second half.”

The Zeps got on the board first when they took advantage of some great field position after a shanked Waterford punt with junior Briar Portman scoring from a yard out to give Shenandoah a 7-0 lead.

The Wildcats answered quickly as they marched 45-yards on eight plays capped by an 11-yard run by Daily on the very first play of the second quarter.

Waterford trailed by a point after failing on a two-point play attempt and the Zeps quickly pushed that lead to eight on Portman’s second one-yard touchdown of the opening half.

Shenandoah took full advantage of a pair of Waterford personal foul penalties and tied things up with just three ticks left on the clock when quarterback Kendal Sherman tossed an 11-yard touchdown pass to Aden Laippley before Portman converted the two-point conversion.

Waterford got the ball to start the second half and promptly put together a 59-yard, 13-play drive that took nearly eight minutes off of the clock which was culminated by a 12-yard sprint to the end zone by Dailey.

Wildcat sophomore Luke Teters came up with a huge defensive play when he picked off Sherman deep in Waterford territory and two plays later Pantelidis scored on an 8-yard run to give the Wildcats a 34-22 lead late in the third quarter.

The Zeps were able to move the ball fairly well in the first half but could get nothing going at all offensively against the tough Waterford defense in the second.

“We just needed to quit making mental mistakes but our kids battled and they have been battle-tested all year,” said McCutcheon. “I think that game last week at Belpre helped us because we were down at half there and that was a physical game so we knew what to expect and these guys came out and played phenomenal in the second half.”

Incredibly Shenandoah ran just nine plays on offense the entire second half and the Wildcats added two more touchdowns in the fourth quarter to stretch their lead to 48-23.

Portman scored his third touchdown of the game when he broke the ensuing kickoff 84 yards for the final score of the game.

Dailey rushed the ball 14 times for a game-high 136 yards while Heiss added 14 carries for 60 yards before leaving with an injury in the final period.

Heiss completed 5-of-8 pass attempts for 96 yards and the two touchdowns.

Portman led Shenandoah in rushing with 91 yards on 21 carries as well as receiving with three catches for 18 yards.

The Zeps season comes to a close with an 8-3 record and the game marked the final one for the 10 seniors on their roster.

“When these seniors were freshman we were a losing football team,” said Shenandoah head coach Jesse Wells. “Now for them to accomplish something that only a a few teams have accomplished is pretty awesome.”

Waterford will now face the task of taking on number one seeded Harvest Prep next Saturday at a site to be determined.

“Our defense stepped up… we were undersized and under-manned but these kids have got a fight like I’ve never seen,” said McCutcheon. “We weren’t supposed to do anything this year and here we are in the second round of the playoffs again so I’m super proud.”