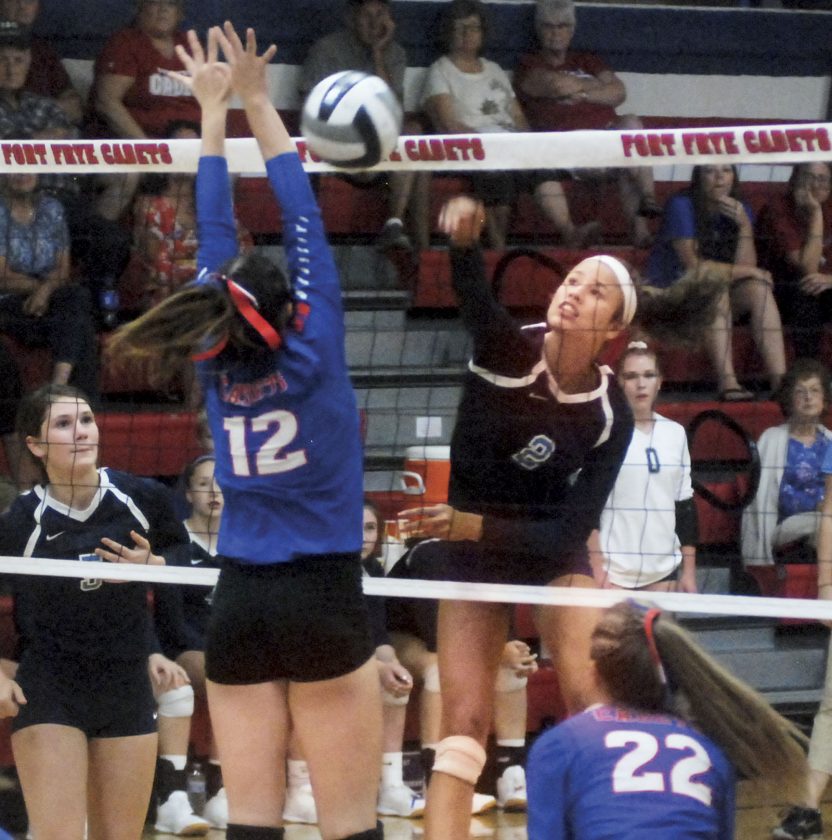 Parkersburg Catholic’s Aaliyah Brunny, pictured here in a match at Fort Frye, recorded 17 kills against Williamstown on Thursday night in Class A sectional action to help PCHS advance to the regional on Saturday morning in Ravenswood. Photo by Jay W. Bennett

RAVENSWOOD, W.Va. — When senior Kylie Stephens stepped up to the service line for the Wirt County Tigers versus Parkersburg Catholic during the Class A Region IV, Section I finals Thursday night inside the New Gym, it seemed like the Crusaders had no answers for the hard-hitting senior. Stephens found holes in the defense and her serves was powerful enough where if a Crusader would make a play on it, the ball would ricochet off landing on the ground or be unplayable.

Finishing with 20 points and 11 kills, the Tigers swept Catholic in three straight sets, 25-14, 25-4 and 25-23 and will play Sherman in the regional semifinals Saturday also at Ravenswood.

“It’s definitely not individual work, we definitely work well as a team. We work for it during the offseason and it paid off. I like to say we can go to Charleston, but we are going to take it one game at a time. We are not going to look past anyone at this point.” Stephens said.

Picking up their third win against the Crusaders, Tigers first-year head coach Miriam Beall liked the performance from her Tigers and expects the same for Saturday.

“They are playing really well as a team, they are actually talking and wanting to be out there. They are really energetic and that’s what we need for them to be. So it’s really good for them to be putting all that together right now, especially with all these games being important.” Beall said.

Wirt jumped out to an early 5-2 lead in the first set, but that was the largest lead for the Tigers until Stephens went to serve for the first time of the match.

Giving Wirt County the lead at 14-13 with a double block with junior Maddy Richards on the previous set. Stephens rattled out five straight aces until her seventh serve went out of the play.

Richards chipped in with two aces herself and junior Sam Burns scored the final point of the set.

It was all the Tigers in the second set, running away with a score of 25-4.

Tigers found success once again from the service line thanks to Stephens (4) and Richards (3).

Getting as close as two points in at the start of the second set, Catholic couldn’t get any closer than that for the remainder of the set. The Tigers scored 11 unanswered points, until a service error by Stephens.

Catholic almost came back and forced a fourth set, only two points away from a win at 23-20.

Wirt County denied the fourth set thanks to junior Emma Wyer’s two kills, an ace from Maggie Bailey and Richards’ match-winning point for the 25-23 win.

Wyer had the second most kills with seven and junior Adeline Sims set up her teammates perfectly throughout the entire night and had a match-high 23 assists.

The main contributors for Catholic were junior Jenna Boice with 11 assists and fellow juniors Aaliyah Brunny and Madison Ross with five and four kills between them. Senior Gracie Lowers helped out the cause with three aces.

Guaranteeing a place in regionals by beating the Williamstown Yellowjackets in the elimination match, the Crusaders will play Buffalo also on Saturday at 10 a.m..

“We shut down on the second set a little bit, but I’m proud that they didn’t quit in the third set and they made it respectable. It’s always a good game against Wirt County,” Catholic head coach Amanda Weatherwax said. “So we are fortunate to have fought back from losing our first sectional game and the girls knew what that meant. They work together and they pulled together whenever the times were tough, they worked hard and we will be back for the fight on Saturday.”

Boice had a team-best 30 assists and Brunny (17) and Lainie Ross (10) each had double-digit kills. Sophomore Lakyn Joy bested Boice by having three more assists and senior Skyler Chancellor had team-high 16 kills and Lakin Hall finished with 12 kills.

“I think that we started off the season a little bit slow, we had a lot of growing to do. I think we did grow a lot throughout the season, we improved. I couldn’t have asked for them to play a better game tonight, or just didn’t fall our way.” Yellowjacket head coach Rachelle Cole said.