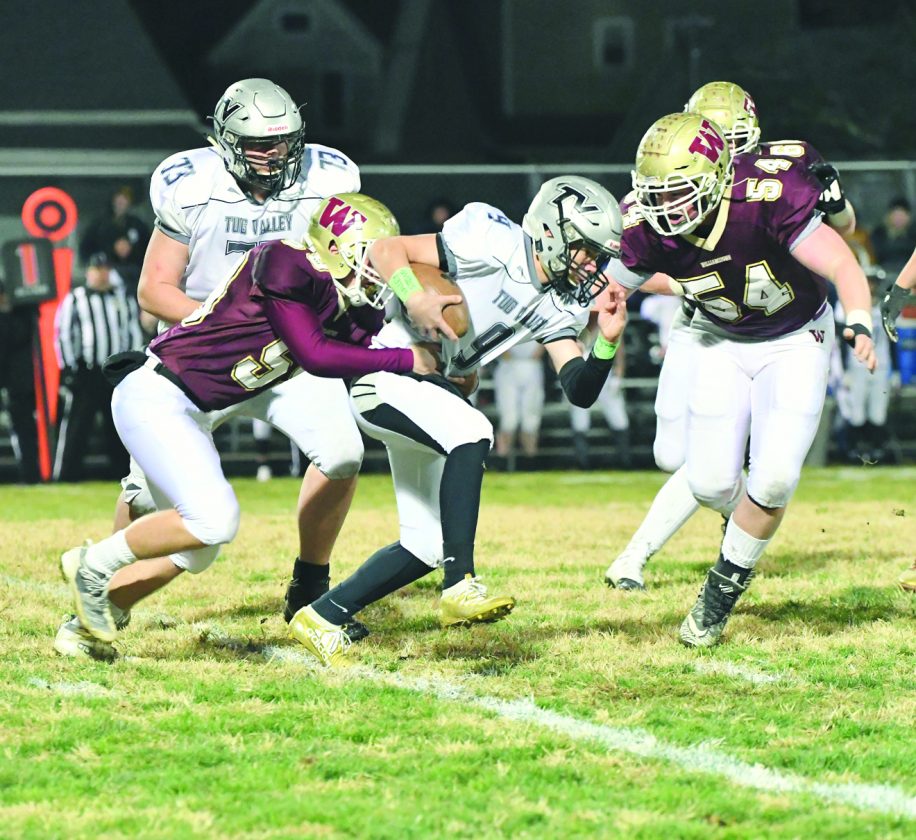 Sparked by quarterback Brayden Modesitt, running back Ty Moore, and a tough-as-nails defense, the host and fifth-seeded Yellowjackets blanked 12th-seeded Tug Valley, 42-0, in a Class A opening round football game Friday night.

“It was a team effort,” said the 6-foot, 157-pound Modesitt. “The line, receivers, and defense played very well tonight.”

The junior signal caller himself completed 8 of 11 passes for 101 yards and two touchdowns of 47 and 18 yards to Nick Bondi and Eric Brown, respectively. Modesitt also rushed for 50 yards on three carries and one touchdown of 21 yards.

“Ty’s got some legs on him,” Modesitt said. “He can move. When he gets that open hole, he’s gone.”

Added Smith, “It doesn’t surprise me about Ty. He works so hard, and deserves it.”

Brown and Bondi combined for eight receptions and had 50 receiving yards apiece.

“It was all about the routes and getting open,” Modesitt said. “We just did what we had to do.”

Defensively, Williamstown (9-2) had four interceptons and recovered one fumble. Brown had two interceptions, including a 21-yard pick-6 in the third quarter.

Blade Britton and Brady Ankrom each had one pick while Logan Richards pounced on a fumble.

“We got some turnovers,” said Smith, whose Jackets are scheduled to play either fourth-seeded Green Brier West or No. 13 Tygarts Valley next Friday or Saturday.

Tug Valley exits with a 6-4 record. The Panthers were led by senior QB Ethan Varney, who passed for 101 yards and rushed for 72. Wide receiver Caleb May had six receptions for 86 yards. Varney twice got TV inside the WHS 10 on drives in the second quarter, but both stalled, and the Panthers turned the ball over on downs.

Helped by a partially-blocked punt, which was recovered by Kole Sutton, Williamstown got the ball on the TV 34 yard line late in the first quarter. Capitalizing on the field position, Moore swept left and went 24 yards for a TD. Josh Erb then converted his first of six extra-point kicks to make it 7-0.

“I think we got off to a good start,” said WHS head coach Terry Smith. “And the last couple of weeks we haven’t. Of course, we played some pretty good teams.”

On the first play of the second period, Modesitt scored on a 21-yard keeper to stretch the Yellowjacket lead to 14-0.

Then, late in the stanza, on a fourth-and-one on the WHS 44, Moore broke one for 56 yards and a score.

Early in the third quarter, Modesitt hit Bondi with a 47-yard scoring strike, and the rout resumed.

Brown then intercepted a Varney throw and returned it for a TD to make it 35-0.

After Richards recovered a Panther fumble, Modesitt passed 18 yards to Brown to cap all the scoring in the contest.