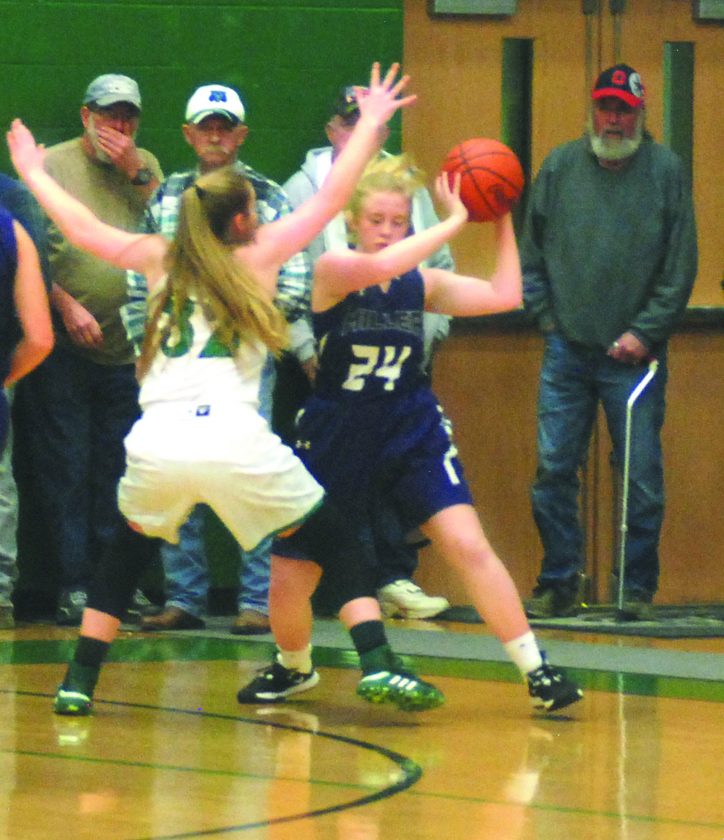 WATERFORD–The expression that “defense wins championships” was alive and well during the Waterford Wildcat girls’ 40-31 season-opening win over Tri-Valley Conference foe, Miller. Although this game wasn’t a championship affair, the Monday night matchup at the Harry Cooper Annex featured defensive pressure comparable to the effort of last year’s 20-5 squad.

After the ‘Cats struggled to knock down shots in the opening quarter, (1-12 from the floor) they fought back and finally got shots to fall. It was Cara Taylor’s night, as the Wildcat sophomore accounted for 13 of her team’s 15 second quarter points. A floater in the lane beat the buzzer from her to cut into the 19-15 Miller lead at the half. A total of 12 boards found Taylor, as she reached a double-double in the first contest of the year with the home crowd cheering on.

“I just really had a drive to make my teammates open, and I ended up getting open, myself,” Taylor said of the performance. “We don’t have much experience, since we’re a young team. The first half was us just trying to learn how to play together.”

If the first half was the team learning how to play together, the second half was an exercise in picking up where they left off from the previous quarter.

The Wildcats came out swinging in the third, as ball movement played a role in getting the green and white ahead.

Maggie Huffman picked the pocket of a Falcon and located Brier Offenberger for a quick two points. Shortly after that, Huffman was at it again, as she stole the ball and found Riley Schweikert. Schweikert dished a pass to Taylor, and the deficit was gone.

It was part of a 14-7 third quarter that signaled a togetherness head coach Jerry Close wanted to see. Picking up the tempo and cutting down on poor shot selection were two of the things he wanted to see eliminated in the successful second half. Although the score was a 29-27 Waterford advantage late in the fourth, key assists from Taylor and Offenberger helped Kari Carney and Jennessa Lang grow the lead. In Lang’s case, her 3-pointer put the ‘Cats up by five with 1:22 remaining.

On the other end, Offenberger secured a rebound that ended up being off the final shot attempted by the Falcons at 1:14 to go. Coach Close was happy with how his team responded to adversity, as the group is gearing up for another season full of big games.

“There was much better intesity (after the first quarter), and for a lot of them it’s their first game,” Close said. “I thought we played well in spurts and thought we looked young in spurts. We should get better as the season goes on. We’ve got a couple injuries that are making us younger (Mackenzie Suprano and Briana Offenberger), but it is what it is. We’ll adjust.”

The Wildcats have some time to do what Close said, as they go on the road at 7:30 p.m. next Monday against Federal Hocking.