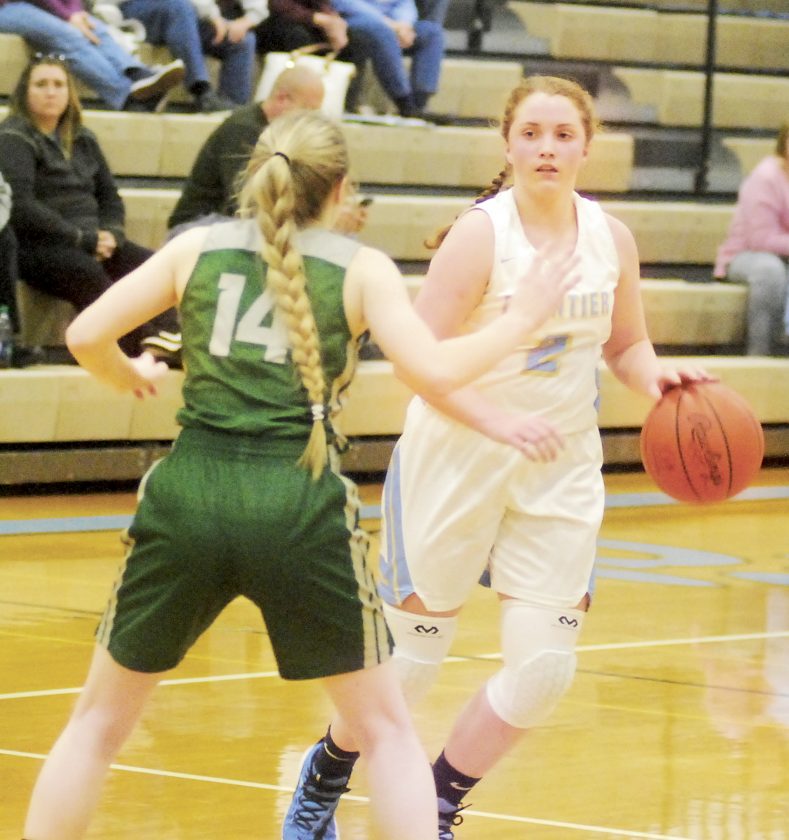 NEW MATAMORAS — With four freshman in the starting lineup, the Frontier Cougars can expect some inconsistency, especially in the early part of the season.

The undefeated Shenandoah Zeps took advantage of that inexperience Monday night with a 38-25 win over their former Pioneer Valley Conference rivals at Frontier High School.

Junior Ashleigh Wheeler and senior post player Raegan Flood combined for 29 points as the Zeps pulled away in the second half to notch their third win in as many tries to open the 2019-2020 campaign.

“We had found in our first two games that playing good defense is leading to us playing better offensively,” said second-year Shenandoah head coach Sami Schott. “Frontier has a very young team so we wanted to set the tone with our defense and then in the second half we came out with more urgency on offense and it paid off.”

The young Cougars jumped out to an early 6-3 lead before the Zeps scored the final seven points of the first quarter to stake claim to a 10-6 lead.

Frontier connected on just 4-of-22 field goal attempts in the first half as the Zeps increased their lead to 14-8 at the break.

Third-year Frontier head coach Mike Cisler felt like his team had plenty of good looks early on but struggled to put the ball in the basket.

“We really had the looks we wanted we were just cold and couldn’t make the shots,” said Cisler, whose team shot just 25 percent (12-48) from the floor in the game. “Defensively we did a good enough job but you aren’t going to win many games only scoring eight points at the half.”

The Cougars quickly cut the lead to four to open the second half when Kylie Lamb scored an inside bucket on an assist from fellow frosh Tacey Kirkpatrick, but Wheeler began to heat up for the Zeps by making a pair of freebies and then the first three-pointer of the game to push the lead to 19-10.

Frontier bounced back once again to cut the lead to four on a bucket and a free throw by freshman Emily Cisler and a steal and basket in transition by junior Haley Bills.

That would be as close as the Cougars would come as Shenandoah went on a 9-2 run to close out the third period and take a 29-17 lead heading into the final quarter of play.

Wheeler scored eight of the Zeps 15 third quarter points including a pair from behind the arc.

“Ashleigh (Wheeler) got in a bit of foul trouble in the first half and I think she knew in the second half she was going to have to play a bigger role offensively for us to win,” said Schott. “I think the job that Raegan (Flood) did inside allowed things to open up outside and for our guards to shoot with confidence.”

Baskets by Flood and Natasha Carpenter opened the final quarter and pushed the Zeps lead to 16 and they would cruise the rest of the way to send the Cougars down to their third consecutive loss.

Wheeler led all scorers with 16 points while Flood finished with 13 points and 16 rebounds.

“She (Flood) has been struggling with some back issues so she really needed that game,” said Schott, whose team travels to Meadowbrook on Wednesday. “She knows her role on this team is to rebound and she did a great job of that tonight.”

All but two of the Cougars points came from freshman with Kara Ramsey leading the way with eight followed by Lamb with six and Cisler with five.

“Wheeler and Flood are a real good one-two punch for them and I thought we did a pretty nice job on them,” said Cisler, whose team will travel to Beallsville on Thursday. “Our game speed is getting better and these girls are learning what it takes to play at the varsity level. We’ll keep on working and we’ll keep getting better.”