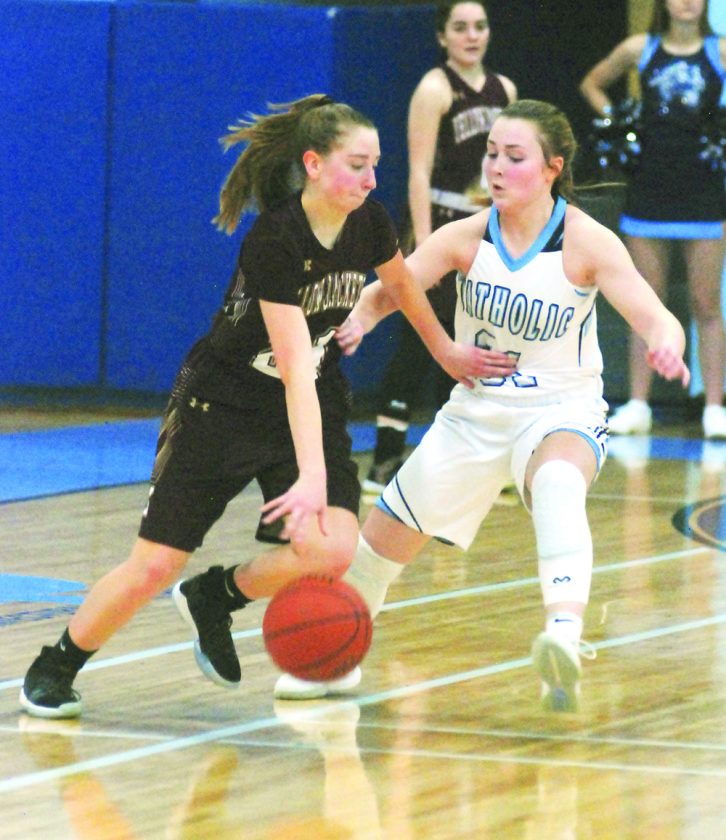 PARKERSBURG –The ball keeps rolling for Parkersburg Catholic Crusaderettes. On Friday night, the 12-0 girls rattled off a season-high 94 points and forced a total of 35 turnovers in their 94-35 home win over the Williamstown Yellowjackets.

From the opening tip, head coach Marty Vierheller’s group attacked when they could. The Crusaderettes rattled off plenty of points, as they outsored the visiting Yellowjackets in a 23-4 effort.

Catholic didn’t stop there, and dynamic scoring performances capped off a night to remember for plenty of reasons. While she didn’t lead PC in scoring, Aaliyah Brunny’s 13 points were enough to etch her name in Parkersburg Catholic basketball lore. The Crusaderettes were in the middle of a 23-2 third-quarter run when Brunny went coast-to-coast for a history-making layup.

The game came to a halt with 3:16 on the clock, as Brunny just scored her 1,000th point. She raced up the bleachers and embraced family members, as she achieved the feat midway through her junior season.

“I knew I was close, but I didn’t know how close I was,” Brunny said of how she felt getting her 1,000th point. “It was nice that it was tonight in this atmosphere. I’m just going to keep setting goals for myself to reach.”

Brunny’s 13 points gave her another double-digit night, but she wasn’t the leading scorer. Leslie Huffman led the charge with 29 points, and Lainie Ross had a night on the inside with 18 of her own. Madeline Huffman scored 14 points in the win, and those four leaders gave coach Vierheller a lot to say.

“The first thing that comes to my mind is that Leslie Huffman was such a spark plug for us tonight. She came out absolutely on fire (11-of-14 from the floor),” he said. If she shoots the ball like that, we’re pretty tough to guard. She was the impetus in the early part of the game, and I think everyone fed off that. We just believe in balance. We don’t want to be just a one, two or three-headed monster. They’re all unselfish, and they sacrifice themselves for the greater good of the team. I’ve been on the opposite end of games like this. At the forefront of my mind is understanding what it’s like to be on the other side. I just respect Williamstown so much, but it was a night where everything went our way.”

On the other end Williamstown (8-4) went through stretches of the contest where they struggled to score, and head coach Fred Sauro was complimentary of the work Vierheller’s group did to make it a long night for them.

“They’re just really good, and they’re getting better. There are things we could have done differently, but we chose not to do them,” Sauro said. “Their skill, their aggression, their defense was just tremendous. I’m proud of my kids. I’m really happy they gave all they could. (Parkersburg Catholic) is doing this to everybody, so we’re just the next one in line, I guess. I know we can play better, but there’s a lot you’ve got to do to take care of your best players.”

The Yellowjackets with leading scorers Jayla Wiseman (12 points) and Bryce Blair (6 points) play again at 7:30 p.m. on Tuesday at home against rival St. Marys. Meanwhile, the Crusaderettes face a test at 7 p.m. on Monday against visiting Gilmer County.