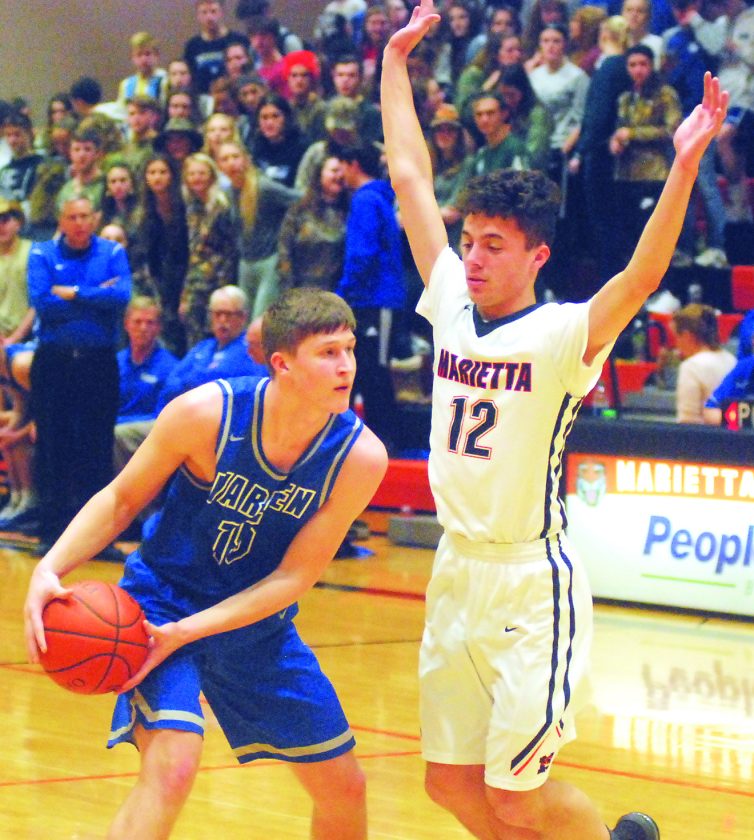 Simoniette responded by putting up a game-high 18 points, including sinking five 3-pointers, to help Warren (8-4) come away with a convincing 58-40 victory over the Tigers. In the first quarter, he converted a three-point play and then drained three straight shots from beyond the arc to put the visitors up 19-8. The Tigers never recovered.

“I do (feed off it) a little bit,” Simoniette said of the crowd noise. “You kind of get used to it after a while. I love hyped crowds.

“It’s always good to get off to hot start. Starting fast gets us an early lead and we keep going from there.”

Marietta got within eight, 24-16, on Tony Munos’ jumper with two minutes left in the first half, but Simoniette responded with his fourth 3-pointer to put the Warriors back up by 11. They led 31-20 at halftime, and Simoniette’s triple with seven seconds remaining in the third made it a 23-point game, 50-27.

“He got us off to a big start,” Warren head coach Blane Maddox said of Simoniette. “It’s important when you’re on the road to get off to a good start. He gave us the confidence to start and everybody picked up on that momentum.”

“They came out and punched us in the mouth and we really didn’t have an answer,” said Marietta head coach J.D. Secrest. “I’m not real disappointed in the shots we took tonight, they just didn’t fall. They came in and set the tone and the tempo and we didn’t do a real good job responding.”

“Loved the effort tonight,” Maddox said. “I thought our whole team was focused. Our bench gave us a great spark.

“We shot the ball well and took care of the ball better. We made adjustments. We’re in midseason. We know what we need to do now. We’ve just got to keep trying to get better and better from here on out.”

Warren’s ability to shoot from outside and score underneath gave Marietta trouble.

“They’re a tough matchup for us because they’ve got some size and they’ve got some shooters,” Secrest said. “If we try to take away their size, then we tend to leave shooters open, and if we worry about the perimeter they’re going to kill us inside.”

“We knew we had to stop those two,” Maddox said. “I thought we did a good job all night long.”

Adam Coil was Marietta’s top performer, producing a 14-point, 15-rebound double-double. He knocked down two 3s and was 6 for 12 from the floor.

“Thank God Adam Coil showed up,” said Secrest, whose Tigers play host to a tough Dover squad Friday. “Adam Coil played a heck of a game. If he’s not there, we don’t get 20 points. We told him after the game if we can get our offensive threats back on track and have a third kid that can get us 10 points, we’ll be tough to handle.”

Warren, which plays another key district game Friday at Athens, has now won six of its last seven games.

“We’re better than our record. We’ve won I believe six out of our last seven. We’re definitely an improving ballclub. I’m excited to see where we go.”

Warren picked up its second win over Marietta this season, defeating the Tigers 57-56 in the season opener in Vincent.