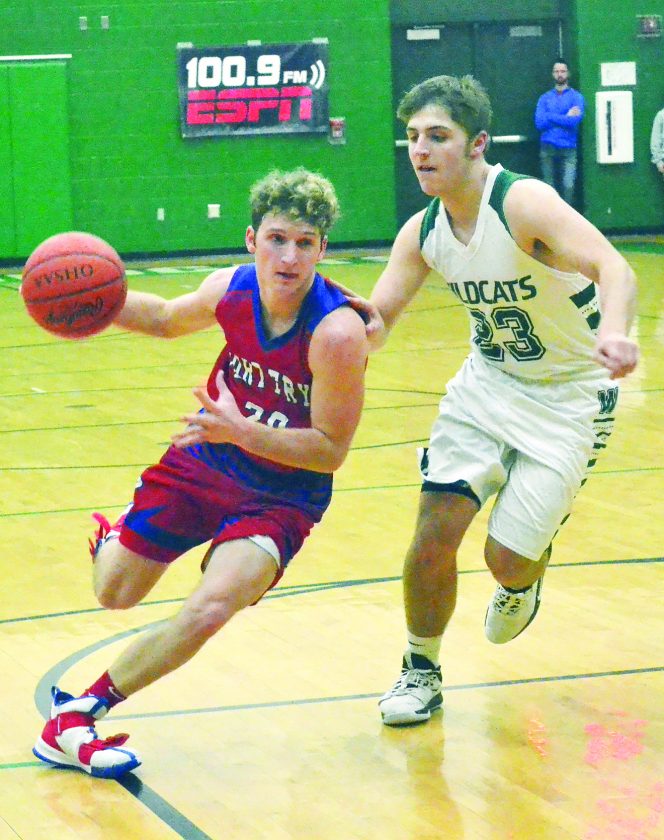 After a 9-0 run at the outset, the Cadets went on to defeat the Wildcats, 53-25, Friday night in a prep boys basketball game at the Harry Cooper Annex.

“I thought we did very well in executing what we wanted to execute,” said FFHS head coach Eric Henniger. “We didn’t want to give them too many easy layups on the press.”

Kelton Fogle paced the Cadets (11-1) with a game-high 16 points, while Zane Wallace and Caden Fryman netted 11 and nine markers, respectively. Brady Schilling chipped in with six.

“Kelton and Zane are supposed to score the points,” Henniger said. “We expect them to score and play defense. They’re the leaders on our team.

“Offensively overall, we executed what I wanted to see.”

The Wildcats, who were limited to three single-digit quarters in the game, shot 27 percent (9-33) from the floor.

“Defensively, we just wanted to hurry them up and take bad shots,” Henniger said.

After scoring seven unanswered points on buckets by Fogle, Adkins, and Schilling, Waterford called timeout at the 5:58 mark. When play was resumed, Fogle hit a jumper to make it 9-0 Fort.

At the 4:03 mark, Jude Huffman, a non-starter, scored the Wildcats’ first points of the contest on a layup.

In the second quarter, Schilling, Wallace, and Fryman each had four points as Fort stretched its lead to 22-9 at halftime.

“I thought in the first half, (Waterford) did a good job of running the clock and making us work a little bit on defense,” Henniger said.

Fogle had the hot hand in the third quarter, scoring eight points, as the Cadets doubled up on the Cats, 42-21.

Wallace and Fryman had five points apiece in the third.

Dailey scored all of his points in the game in the third stanza.

Fogle added five more points to his total in the fourth quarter as Fort won going away.

Jimmy Hitt knocked down a 3 for Waterford’s only field goal in the final period.

“Our defense adds to our offense a lot,” Henniger said.