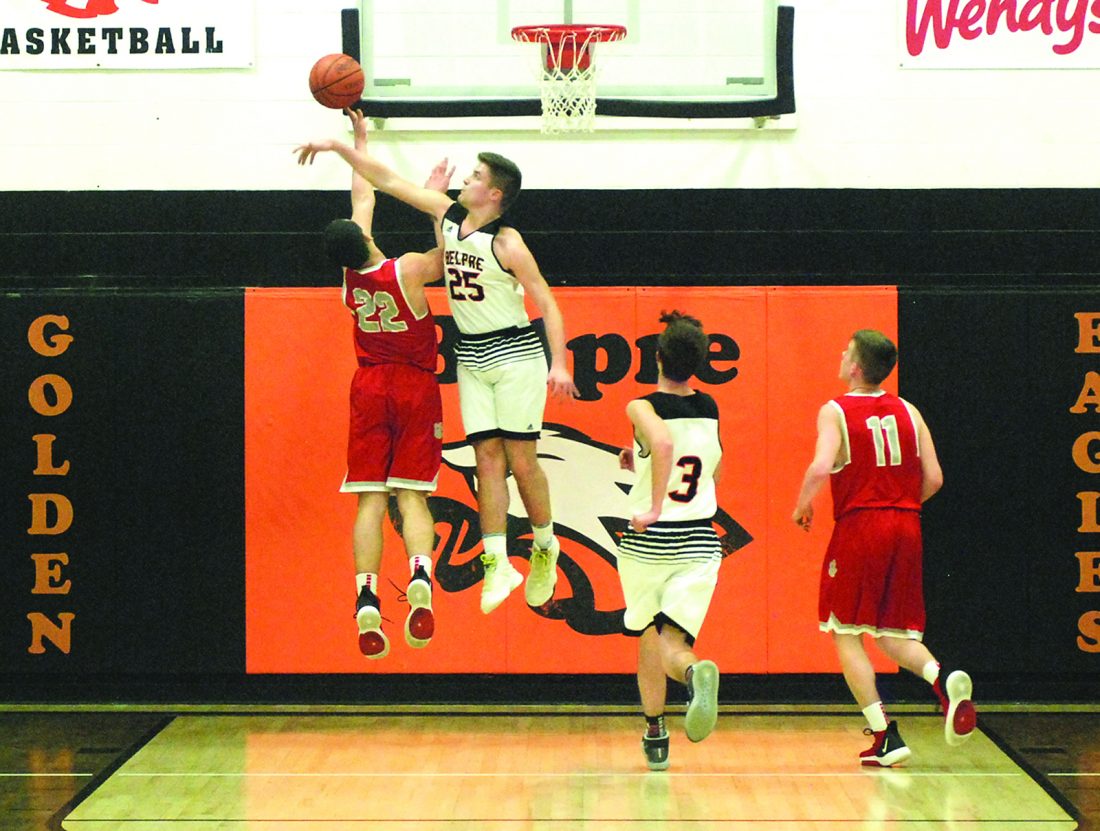 BELPRE — Blake Guffey was a force down low for Trimble Friday night.

The Tomcat sophomore powered his way to 36 points, nine rebounds and three steals to help THS defeat host Belpre 64-42. The Golden Eagles were within three, 33-30, midway through the third quarter, but Guffey’s six points helped fuel a 9-0 run to stretch Trimble’s lead back to double digits. Belpre never recovered.

“We came out and closed the gap and got within three there,” explained Belpre head coach Tyler Leasure. “I think we started trying to get all three back at once. I think we shot a couple 3s in a row and didn’t hit them. Before we knew it, (the deficit) was back up.”

Guffey was the only Tomcat to score in double figures. Tyler Weber added nine points while Austin Wisor and Brayden Weber tacked on six apiece. Trimble improved to 13-2 overall and 9-1 in the Tri-Valley Conference Hocking Division to keep pace with Federal Hocking.

“Any time you can come in to Belpre and get a win, it’s a good win,” said Trimble boss Howie Caldwell. “This is a difficult place to play.”

Makiah Merritt paced Belpre (9-6, 6-4 TVC) with 14 points. Connor Baker chipped in 11. It was Baker’s basket with 5:30 left in the third that got the Golden Eagles within one possession.

Guffey answered with back-to-back baskets. Trimble then scored five straight at the free-throw line to make it 42-30.

It was 14-point game with time winding down in the third when Guffey stole a Belpre inbound pass and went coast to coast for a layup at the buzzer to make it 48-32.

“Our rotations were a little slow from time to time which allowed for (Guffey) to make some easy buckets,” Leasure said. “But you really can’t take anything away from him. He’s a good player. He hurt us when we were down there (in Glouster) as well. He’s a good player across the board and they’re a good team.”

Logan Adams assisted Baker on a 3-pointer to tied the game at 8-all late in the first period, but Guffey scored five straight points to make it 13-8 after one.

A basket by PJ Alder and Merritt’s jumper got Belpre within three, 18-15, midway through the second. Trimble went on an 8-2 run to go up nine, but Tyce Church splashed a rainbow 3-pointer at the buzzer to cut the deficit to six at halftime.

Merritt opened the second half with a bucket-and-one, but Guffey answered with his own three-point play followed by two foul shots from Tyler Weber. Adams responded with a 3 followed by Baker’s deuce, but it was all Tomcats from there as they allowed just 12 points in the final 13 and a half minutes of regulation.

“I thought conditioning really paid off tonight because I thought we were still fresh at the end of the game,” Caldwell said. “I think Belpre got just a little bit tired. Sometimes people criticize how much we run in practice, but I think it paid off tonight.”

Belpre did get within 11, 50-39, at the 6:15 mark in the fourth, but after Trimble went back up by 14, Guffey tallied seven straight points to seal the deal.

“The thing is, he’s only a sophomore,” Caldwell said of Guffey. “He’s going to get better and better and better. But if you asked Blake about his points and so forth, he doesn’t care about that. The only thing that he cares about is that Trimble had more points than Belpre.”