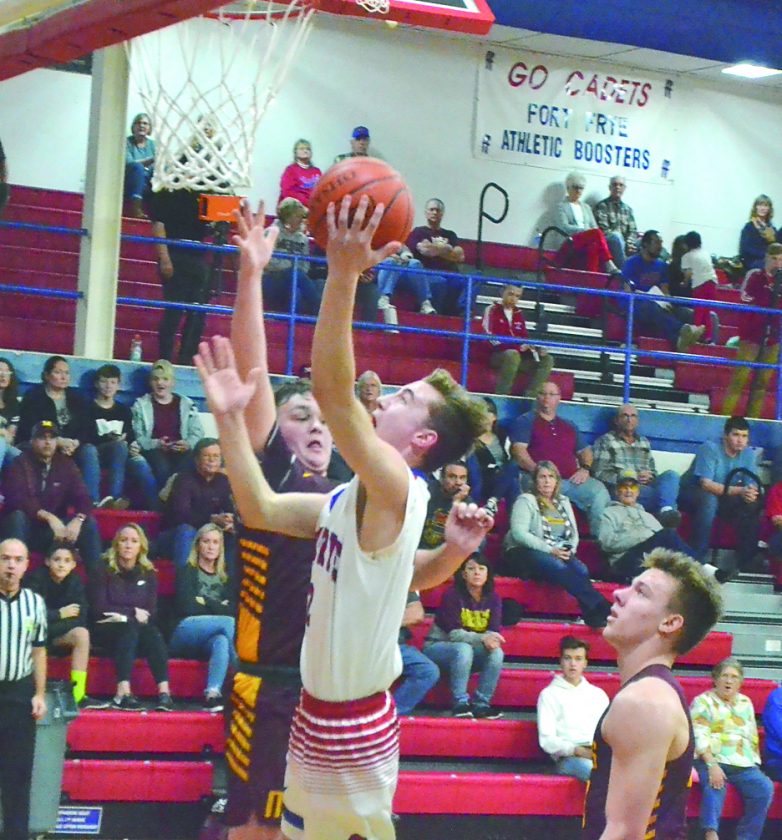 Photo by Mike Morrison Fort Frye’s Kelton Fogle goes up for a basket during a high school boys basketball game against Meigs Tuesday in Beverly.

The Cadets opened the game by knocking down their first 11 shots and went on to down the Marauders 67-54 to improve to 10-1 at the halfway point of the season.

The Fort went a perfect seven-for-seven in the opening quarter and then made their first four field goal attempts in the second period before they finally missed a shot with five minutes to play in the first half.

“It’s about time we shot well…. we haven’t shot well all year,” joked Fort Frye head coach Eric Henniger, whose team shot a blistering 68% (25 of 37) in the game. “It seems like we have been relying on our defense almost every game so it was nice to come out quick and get off to a good start.”

Despite the hot start the Marauders managed to hang right with the home team as they trailed by just three at the end of the first quarter.

The Cadets scored the first 11 points of the second quarter to take a 31-17 lead before Meigs senior Weston Baer slowed the Fort Frye momentum with a short jumper.

The shot was a special one for Baer as it was point number 1,258 in his career and enabled him to pass Trevor Harrison to become the all-time leading scorer in Meigs history.

Early in the third period the Cadets got a triple from Brian Adkins to push the lead back to 12, but Meigs outscored them 11-5 the rest of the way to trim the lead to just six (49-43) heading to the final quarter of play.

Baer traded baskets with Fort Frye senior Caden Fryman to open the fourth quarter before the Cadets went on a pivotal 9-0 run to pull back out to a 15-point lead.

Zane Wallace got the run started for the Cadets with a basket and after Luke Huffman knocked down one of his three 3-pointers in the game, Kelton Fogle scored back-to-back field goals to give the Fort a 60-45 lead.

Field goals by Wyatt Hoover and Morgan Roberts and a triple by Baer whittled the lead down to eight with a minute and a half to play but that would be as close as Meigs would get as the Cadets pulled away to their third consecutive win.

Wallace led all scorers in the game with 22 points while Fogle added 20 points while also dishing out eight assists and yanking down four rebounds.

“We’ve been looking for Kelton (Fogle) to have a game like that and I think the past few games he has been forcing too much,” said Henniger. “Tonight he let the game come to him and he played like a true point guard.”

Senior Brady Schilling also reached double figures for the Cadets with 11 points while Huffman added nine key points off of the bench.

“He’s a good shooter we have just got to find a way to get him open,” said Henniger of Huffman, who connected on three 3-pointers for the second consecutive game. “It’s great to have a guy like him to come off of the bench and you can see him gaining more and more confidence as the season goes along.”

Baer led the way for Meigs with 20 points while Coulter Cleland and Hoover reached double figures with 17 and 10 points respectively.

Next up for the Cadets is a Friday night battle across the river against the arch-rival Waterford Wildcats.

“I think we are starting to figure some things out and the guys came out tonight and gave a full effort,” said Henniger. “We were able to get everyone involved and it’s nice to see our guys working as a team.”