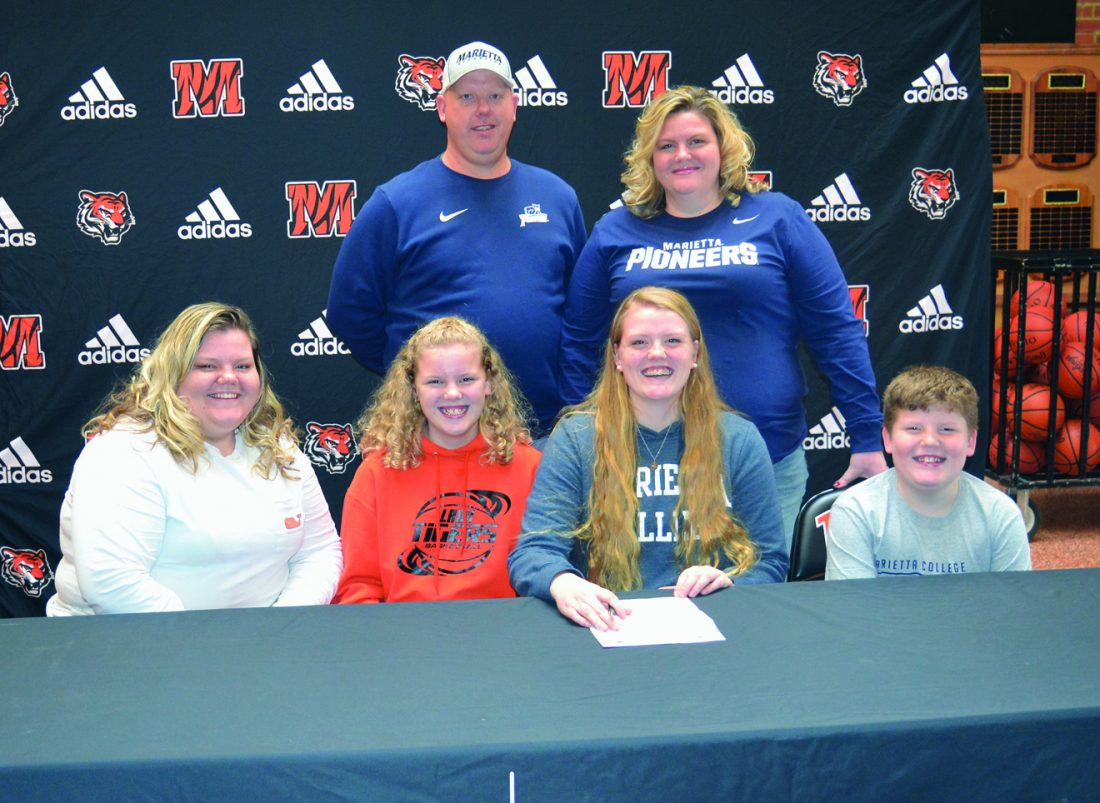 Hannah Kroft was faced with a tough decision as to what sport to play at the collegiate level.

The Marietta High senior three-sport standout in basketball, volleyball, and softball made that choice and to where she will be attending Friday afternoon in a commitment ceremony in the lobby of Sutton Gymnasium.

“I’ve decided to play basketball in college,” said the 18-year Kroft. “Basketball became my favorite over the past two years.

“I’ve also decided to stay home and play at Marietta College. I just love the atmosphere there. On campus, I feel like I’m in a total different area in my own little town away.”

“Coach (Kole) Vivian and the coaching staff were so welcoming and open — and I just loved it.”

Kroft said she also considered the University of Charleston and Baldwin-Wallace.

“It was a difficult decision for her as to which way she wanted to pursue her college career. She chose basketball…and she’s a really good volleyball player, and she excels at softball, too.”

Marietta College is an NCAA Division III school and a member of the Ohio Athletic Conference. The Pioneer women cagers are coached by Kole Vivian.

“Marietta College is not only getting a kid who works hard on the basketball floor,” Ruth said. “They’re also getting her leadership in the locker room and the classroom. They’re getting a really good kid. She’s very coachable.”

With current MC player Alexis Enochs scheduled to graduate in the spring, Kroft is expected to be a leading candidate for the post position on the Pioneer team.

“I’m wanting to finish my senior year as a Tiger strong, and then I’m going to work my butt off over the summer,” Kroft said.

At MC, Kroft is planning to major in athletic training with a major in biology.

Kroft owns a 3.8 GPA at MHS. She said her favorite subjects are history and science.

“I also like math when I understand it,” said Kroft, smiling.

A 6-foot-1 pivot player, Kroft was an Ohio Division I honoree (honorable mention) last season. Currently, she is averaging a team-high 14.6 points and 8.9 rebounds per games for the Tigers, who are 10-5 overall and 8-2 in the East Central Ohio League.

“It’s been a team effort this year,” Kroft said. “And I love my team.”

“I make them in practice all the time,” she said.

Last season as a junior, Kroft had a double-double with 28 points and 21 rebounds in 74-63 win against Warren at Sutton Gym. She also had a career-high 29 points in a tournament game at MC’s Ban Johnson Arena over the Christmas break.

Kroft is the daughter of Ben and Nancy Kroft.