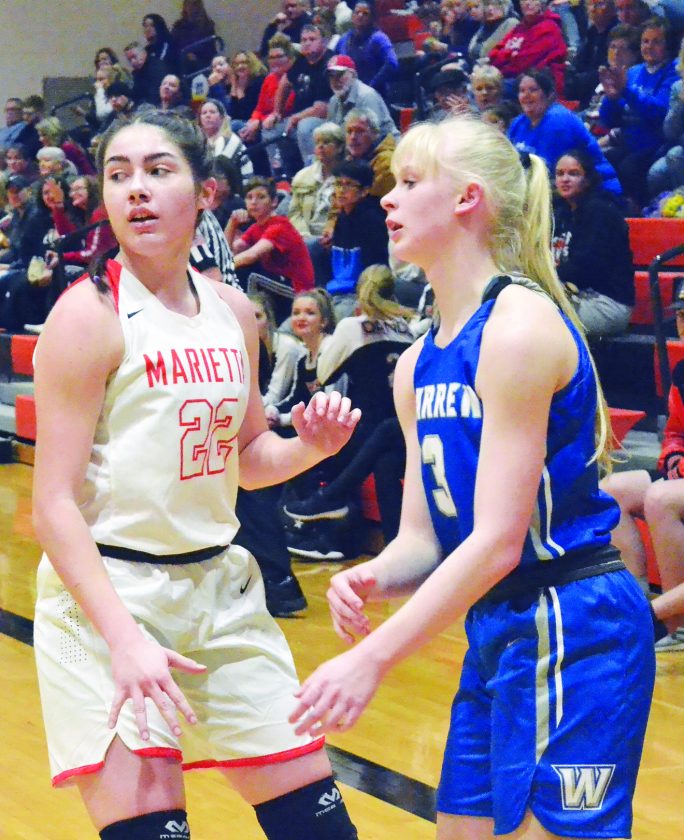 The 5-foot-10 junior’s buzzer-beating layup after Marietta High had tied the score enabled Warren High to down the Tigers, 76-74, in double overtime Wednesday night in a prep girls basketball game at Sutton Gymnasium.

“I knew that we deserved to win, and somebody got hurt (Alex Frazee) tonight, and I wanted to win it for her,” said Alloway, who finished with a team-high 24 points.”

Warren, No. 6 in Ohio Division II with a 17-1 record, extended its winning streak to 16. Abbie Smith added 18 points, while Molly Grayson netted 12. Sommer Saboley and Millie Ryan each chipped in with eight markers while Emme Bowe had six.

“I think every game we play here is down to the wire,” said WHS head coach Amy Colgrove. “So, we knew coming in, it was going to be that same way. They (Tigers) play hard. I’m proud of our girls.

“It didn’t come easy, losing Alex (Frazee) early, and we had a lot of people in foul trouble.”

“Morgan had a big game,” said MHS boss Allen Ruth. “It’s a shame that somebody had to lose tonight.

“Hats off to Warren, they battled. My girls battled. I was really, really proud of my girls. They hung in there. We could just never get over that hump. I thought we did a good job of answering the bell.”

But in the period, Altenburger started to heat up, and scored 10 points as MHS came back to reduce the deficit to 29-26 at halftime.

At the 6:07 mark of the second quarter, Frazee was injured and play was halted. She was reportedly taken to the hospital.

The Warriors maintained the advantage in the third quarter by outpointing the Tigers, 16-15. Keeping Marietta close, Altenburger had a pair of triples and Kroft a couple of deuces.

In the fourth quarter, Altenburger continued to stay hot, scoring eight points as MHS finally caught the Warriors and tied the game at 64-all. Abbie Smith had six points in the stanza and Alloway five.

Alloway nearly had the game-winner on a bank shot in regulation, but it didn’t fall sending the game into overtime.

“I think that shot was half way down the basket,” Colgrove said.

Added Alloway, “I wasn’t supposed to have that one, I guess.”

In the first OT, Alloway made two freebies to make it 66-64. But then Marietta got a layup from Jennifer Smith and two foul shots from Altenburger for a two-point lead.

With under a minute to play, Alloway was a deadeye at the line again, and her two free-throws helped send it into a second overtime.

Warren took a 72-68 lead in the second session on two more Alloway freebies and a Saboley layup.

Marietta cut it to one (72-71) when Altenburger scored and made a bonus foul shot. With 38 seconds remaining, Bowe converted two foul shots to give the Warriors a three-point cushion.

Then, with time running out, Marietta’s Jennifer Smith drained a 3 to tie the score at 74-all. Receiving the in-bounded ball after the Tiger trey, Alloway raced down the court and laid it off the glass as time expired.

“I had a timeout left, but I had the ball in Alloway’s hands in the open court going one-on-one, I was sure that was as good as I could get,” Colgrove said.

Added Alloway, “I had the will to win.”