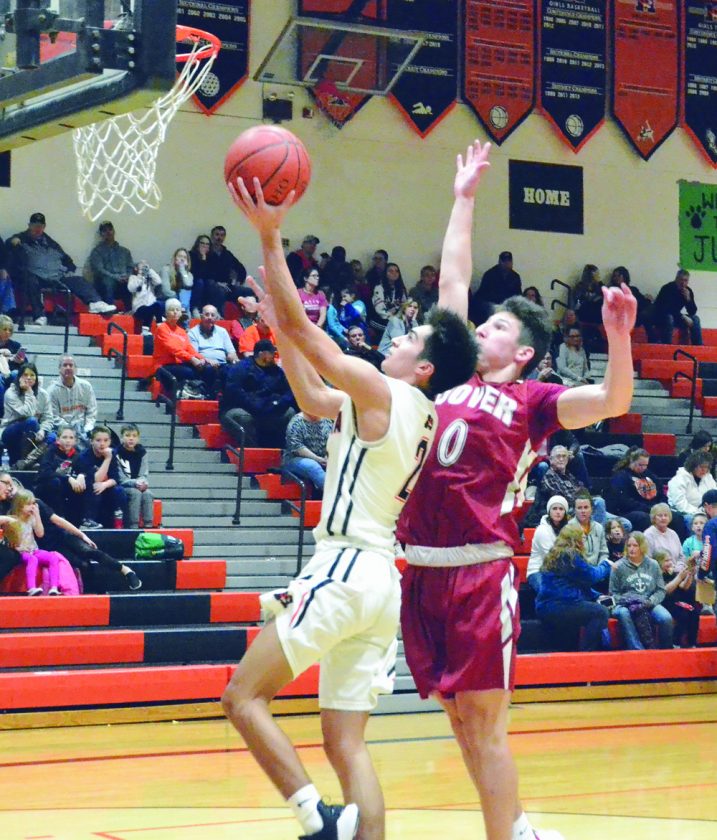 After putting up a valiant effort earlier this season, dropping a nine-point decision back in December on the road against Dover, Marietta had high hopes of scoring an upset victory in Friday night’s rematch at Sutton Gymnasium.

Unfortunately for the Tigers, those high hopes were squashed rather quickly as the Tornadoes jumped out to a huge early lead and never looked back as they routed Marietta 94-43 to remain unbeaten in East Central Ohio League play.

“We shot the ball very well tonight and good shooting will heal a lot of ills,” said Dover head coach Bobby Von Kaenel. “Our depth is improving and our kids coming in off of the bench are getting better and when that happens you can sustain your defense a little bit longer. I felt we did that tonight.”

Dover wasted little time jumping out to a big lead as they scored the first seven points and after a Mark Duckworth runner temporarily slowed their momentum, they went on a 10-0 run to pull out to a 17-2 lead.

The Tornados led 23-6 at the end of the first period before the Tigers put together their best stretch of basketball of the night in the second quarter.

Buckets by Duckworth and Tony Munos opened the second period and after a Dover field goal from Nathan Ravine, Adrian Avendano drilled a triple to cut the lead to 25-13 with seven minutes to play in the half.

Later in the quarter Tiger sophomore Tyler Kytta knocked down a 3-pointer of his own to draw the orange and black to within 11 points at 33-22.

Ruegsegger scored 18 points in the first half alone while Ravine added 10.

“When Kade (Ruegsegger) gets going he is a hard player to stop,” said Van Kaenel of his 6-foot-4 inch senior who plans to play his college ball next year at Mount Vernon Nazarene. “I thought Ravine played well and I really felt everybody hustled and played hard.”

Any hopes of a Tiger second-half comeback were quickly ended when Dover went on a 26-6 run to open up a 37-point lead and rolled the rest of the way even after emptying their bench.

Ruegsegger connected on 13-of-18 field goal attempts and did all of his damage in the first three quarters of play.

Ravine also reached doubled figures with 16 points for the Crimson Tornadoes who improved to 12-2 on the season.

The loss was the second in a row for the Tigers after seeing their seven-game winning streak halted Tuesday night against the Warren Warriors.

Avendano led the Tigers with nine points while Munos chipped in with eight.

The Tigers, who slipped to 7-6 on the season and 4-4 in the ECOL, will be right back in action Saturday when they host Williamstown.