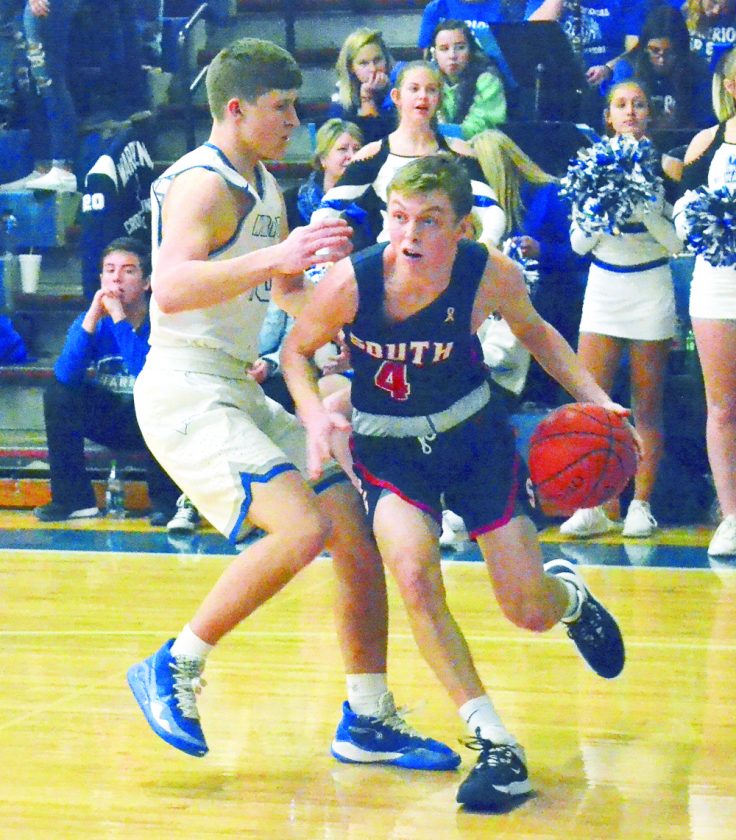 After squandering a 13-point lead in the third quarter, the visiting Patriots managed to hang on to defeat Warren, 53-49, in triple overtime in a prep boys’ basketball game Tuesday night.

“I knew this game was going to be tough, and that’s what I told our guys before the game. If we get up, they’re coming back. They’re not laying down.”

South was paced by Cameron Marks and Zach Seese, who each had 15 points. Nathan Currey chipped in with 10 and Dylan Day netted six.

Seese also grabbed 12 rebounds while Marks had 11 caroms, five assists and four steals. Marks was also 6 of 6 from the foul line.

In the third overtime, Jeffery Tucker’s layup gave the Patriots a one-point lead, and Jake Hogsett (1) and Marks (2) combined to convert 3 of 4 freebies for the final margin of victory.

“It’s a tribute to our kids,” Rector said. “They could’ve laid down many times, but they didn’t. They kept battling.”

The Warriors were led by non-starter Evan Byrd’s 15 points, including four triples. Kurt Taylor and Brandon Simoniette chipped in with 11 and 10 markers, respectively, while Joel Chevalier netted nine.

“It was a great game for the fans,” Maddox said. “Both teams got after it. It was a good ballgame.”

The Warriors were six of 13 from the charity stripe.

“Free-throws are always key,” Maddox said. “Make free-throws, make layups. It’s a simple game, but not that easy to play.”

Marks had seven points and Day six to help stake South to a 17-9 first-quarter advantage.

In the second period, Simoniette scored six points as Warren reduced the deficit and only trailed 21-16 at halftime.

Currey had the hot hand in the third quarter with seven points as the Patriots stretched their lead to 13 points (32-19) at the 4:11 mark. But the Warriors came back and were only down 36-27 going into the fourth period.

WHS outpointed PSHS 12-3 in the final eight minutes of regulation to send it into overtime. Leading the comeback, Byrd had seven points and Taylor four in the period.

In the first OT, Chevalier gave the Warriors a two-point advantage, but Seese’s two freebies tied it at 41-all.

South led twice in the second overtime on two Seese freebies and a bucket by Hogsett. But both times, Warren answered with tying buckets by Taylor and Chevalier.

At the end of the second overtime, it was 45-all.

At the start of the third OT, Taylor’s putback put the Warriors in front. But it was short-lived as Currey drained a 3 from the corner.

WHS got the lead back on Simoniette’s jumper. But then South made it 50-49 on Tucker’s bucket.

With 16.3 seconds left, Simoniette misfired on a shot, and Hogsett was fouled after getting the rebound. At the line, Hogsett made 1 of 2 to give the Patriots a two-point lead.

Warren still had time, but turned the ball over, and had to foul Marks.