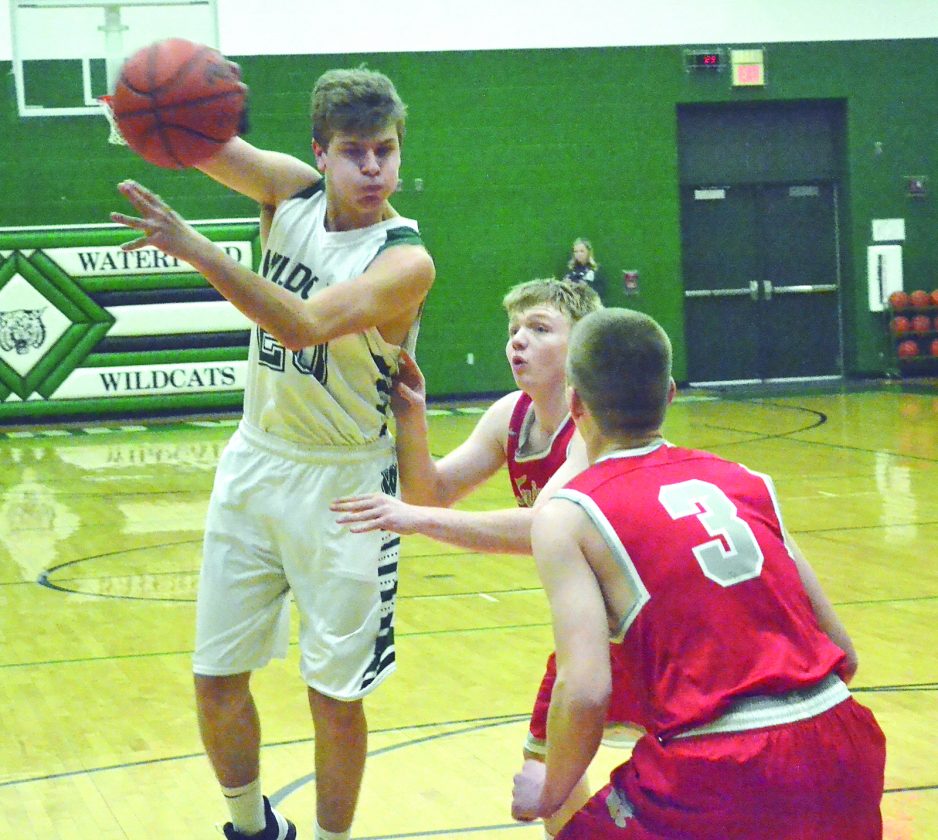 Photo by Ron Johnston Waterford’s Nick Fouss jumps up and looks to pass during a high school boys basketball game against Trimble Tuesday at the Harry Cooper Annex.

The trey gave Waterford High a big boost and tied the game at 22-all.

But after the break, visiting Trimble High recovered from that Fouss salvo and defeated the Wildcats, 47-35, Tuesday night in a Tri-Valley Conference-Hocking Division boys basketball game at the Harry W. Cooper Annex.

Waterford (4-8) was led by Luke Teters, Zane Heiss, and Fouss, who each tallied eight markers. Holden Dailey chipped in with seven and Jacob Huffman four.

Led by its defense, Trimble staked itself to an 8-0 first-quarter advantage. Brayden Weber led the charge with five points.

The Wildcats were stone-cold from the floor (0-9) and also turned the ball over five times.

At the 7:11 mark of the second quarter, Teters banked in a 3 from the top of the key to cut it to five. Chipping away at the deficit, Teters knocked down another triple to tie the score at 15-all with 2:41 remaining. At around the 2-minute mark, Dailey converted two freebies to give the Wildcats their first lead of the contest.

Fouss followed that up with a layup to give WHS a four-point cushion.

But Trimble answered that with a 7-0 run on two Tyler Weber freebies, a Blake Guffey three-point play and a Zach Guffey deuce to regain the advantage.

With time about to expire, Waterford’s Grant McCutcheon passed the ball to Fouss, who launched a buzzer-beating prayer that was answered.

Early in the third quarter, Heiss made a putback and Dailey had a bucket and bonus free-throw to give Waterford a 27-22 lead. The Wildcats never scored again in the period, and trailed the Tomcats 35-27 going into the final eight minutes of play.

In the fourth quarter, Huffman’s deuce reduced the WHS deficit to three ( 36-33). But the Wildcats never got any closer and Trimble was able to stretch its lead into double-digits, thanks in part to six made foul shots.

Waterford is scheduled to host Fort Frye at 7:30 p.m. Friday. The Wildcats dropped a 77-33 decision to the Cadets in Beverly on Dec. 17.