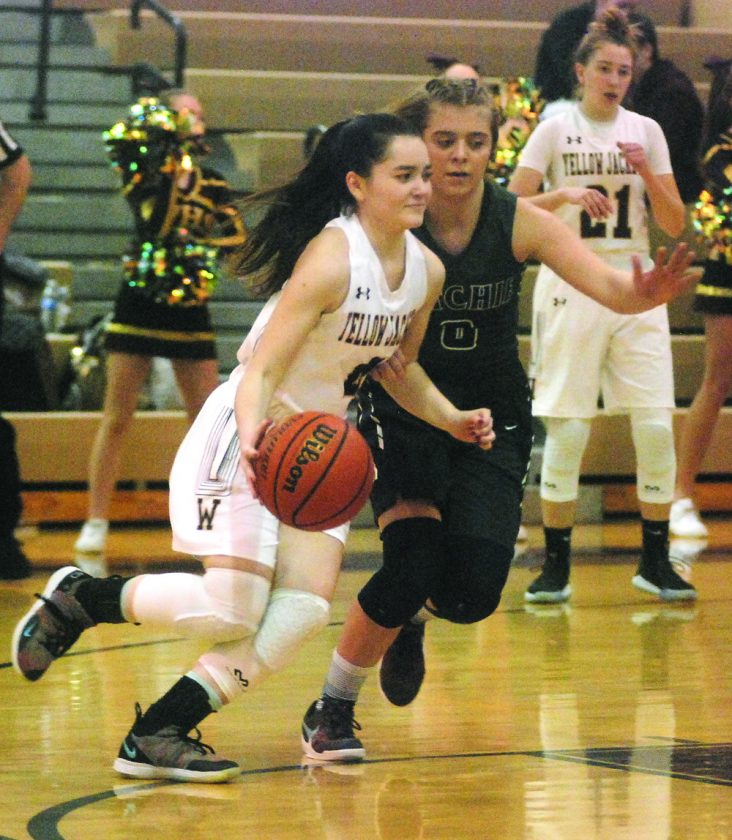 WILLIAMSTOWN — Leading by double-digits entering the fourth quarter, the No. 9 ranked team in single-A Williamstown Yellowjackets had to hold off a fierce comeback by the visiting Ritchie County Rebels to pull out a 62-52 victory, snapping a two-game losing streak Thursday night in Williamstown.

With the score 52-31 entering the final period of play, the Rebels (8-7) showed signs of life thanks to a scoring outburst by freshman Rebekah Ruppert. Ruppert scored eight points, including converting a three-point play to start the fourth quarter and senior Ashley Davis also had three-point play as part of the Rebels’ 11-0 scoring run to cut the lead to single digits with less than five minutes left in the fourth.

Unable to find the bottom of the net in the fourth, Williamstown (9-5) had to wait until junior Jayla Wiseman made both of her free-throws to push it back to double-digits with 3:53 left to play for the first points for the ‘Jackets in the fourth.

Saving her best for last, sophomore Lakyn Joy had six of her total 11 points in the final three minutes to keep the Rebels from completing the rally. Ruppert banked in a fadeaway jumper in the paint to make the score 55-45.

Sophomore Soffi Bee converted the third three-point play of the period and another two from Ruppert made the score 59-52 with less than 30 seconds left, but that was the closest the Rebels could get. Junior Nicole Reynolds (who scored nine points) put the game to bed, going perfect in two attempts at the charity stripe with five seconds left on the scoreboard.

“We didn’t do what we were doing early, they got more aggressive and we kind of got bewildered. We called a couple of timeouts and the kids settled down and I thought we were able to control the tempo of the game in the last few minutes,” Williamstown head coach Fred Sauro said. “We have lost two in a row, we lost to Parkersburg Catholic really, really bad and then we lost to St. Marys in a close game where we shot 1 for 24 from the 3-point line and our guys wanted to prove that we could prevail and then they did. I’m really proud of them.”

Wiseman was the leading Yellowjacket in the scoring department with 12 points and Joy was right behind with 11.

Ritchie’s Ruppert had the game-high of 24 points and Davis had 10 markers.

WHS senior Taylor Newton made the first bucket of the game at 7:33 in the first, but Ritchie County tied it back up with a bucket by Ruppert.

Williamstown pushed the lead to three Newton made a 3 off a dish from Joy. Ritchie once again responded with an Andrea Kirk bucket, but the ‘Jackets went on a 16-4 run to close out the first. Newton scored on a jumper and Wiseman went to work down in the paint and scored on two straight possessions. Joy drilled a 3 off a pass from senior Kayli Sauro and senior Brittney Hooper went two-for-two at the charity stripe to push the ‘Jackets’ lead to 16-5 at the 2:33 mark.

Sophomore Sophie Folwell’s two-pointer and Reynolds’ deep 3-ball gave the WHS a 21-8 lead after one.

Williamstown continued to push the ball up the floor to open up the second period of play, with four points from freshman Georgie Inman and a bucket apiece from Folwell and freshman Emily Bailey as part of an 8-2 scoring run to make the score 29-10 with two minutes played in the second.

Coming out after a timeout by Rebel head coach Dave McCullough, Cress scored six out of her total nine points in the second to make the score 31-21 at the 2:48 mark, but the Yellowjackets scored seven unanswered points before both teams headed in the locker room for halftime.

“We got ourselves down the whole first quarter. You can’t do that to a team that is shooting the ball really well, but this one is on our effort on defense in the first half. We turned the ball over too much (11 turnovers in the first half),” McCullough said. “In the second half, I thought our defense was really good and effort-wise. I mean we were down 30 at one point to cut it back down to eight and had a chance actually to make it close, but congratulations to Williamstown on the win and congratulations to Fred on getting named head coach of the McDonald’s All-American girls game. He deserves it and there isn’t a coach in this state I respect as much him.”

Williamstown returns to action today hosting Moorefield at 7, while the Rebels travel to Jackson County Tuesday to take on Ravenswood.