Yellowjackets keep it rolling in win vs. Red Devils 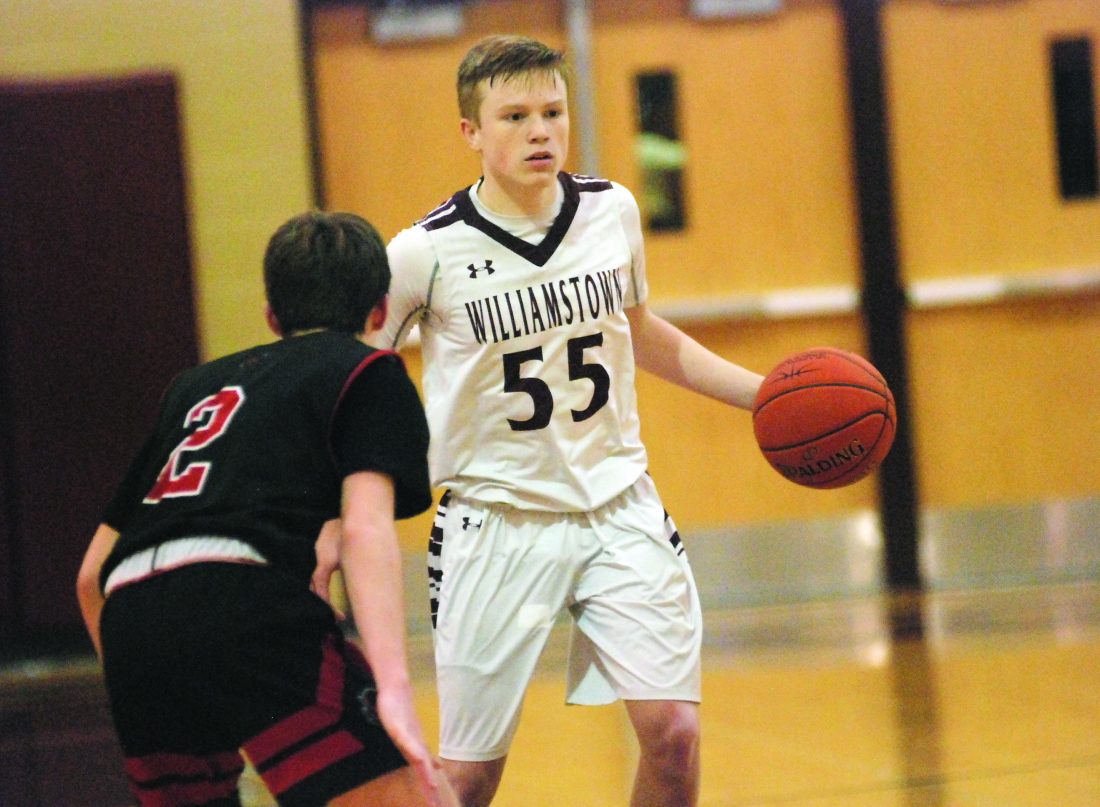 WILLIAMSTOWN — The No. 1 team in Class A played like it.

That’s the summary of the Williamstown Yellowjackets’ 85-51win over the Ravenswood Red Devils on Tuesday night from Williamstown. A balanced attack from the undefeated ‘Jackets (10-0) sunk the Red Devils from the start. A total of 10 triples helped the cause, as four of those came in the opening quarter. That made the score 24-10 after the first eight minutes of action, and Sam Cremeans nailed the final 3-ball of the frame of an assist from Eli Inman as time expired. Cremeans led the way in scoring with 21 points, and he talked about how this team effort came together to drop the Red Devils to 4-5.

“We’re just treating every game the same, and we’re coming prepared,” he said. “We’ve played really well as a team, and I think that’s made the difference. I think it’s about heart. Coach (Scott Sauro) really pushes just hustling every play and putting your all into every play. I think we’re definitely doing a better job of that now.”

Cremeans wasn’t wrong. Williamstown nearly doubled up Ravenswood in second-quarter scoring, as a 25-13 second quarter was punctuated by hustling and creating open looks. Peyton Amrine was the main beneficiary of this, since his stroke from beyond the arc was true. He nailed all of his team-high four long-balls in the second. The last one he shot went in at the buzzer, as Ravenswood head coach Mick Price was complimentary of the effort from WHS.

“They’re just that good. They’ve got post players, they’ve got wing players, point guards, shooters. We’re in a war with a .22 pistol, and they’re in a war with a missile,” he said. “It’s a little different. I felt like Elmer Fudd going hunting. They did what they had to do in the first half to be successful, and we did not.”

Price later said the message in the locker room was to keep playing for the remaining 16 minutes and that they “have to keep getting better” for themselves.

“I don’t think we quit playing hard, we just didn’t have as many bullets in our gun. We don’t,” he said. “We’ve still got games to play. We’re going to try and get better. We’re playing Sissonville (Thursday on the road), and they just got a kid eligible from the Congo who’s 6’9. We’ve got to get ready for them. We can’t worry about anyone else.”

Despite top scoring performances from the likes of Jacob Creel (14 points) and Trey Mandrake (13 points), the Red Devils could not get anything else to drop in either half. The final half was the same as the first, and Williamstown’s coach Sauro liked what he saw in the victory. Especially with the double-digit nights from Isaac Cutright (13 points) and Eli Inman (12 points), it was a complete performance from the home team as they travel Thursday to Ellenboro when they take on the Ritchie County Rebels in LKC action. Still, any thought of treating these game differently due to being at the top of Class A is out the window for this bunch.

“We wanted scoring balance, because that was the reason why we got off to the start we wanted to,” Sauro said. “We don’t really talk about (being ranked No. 1) that much. That won’t get you a rebound, it doesn’t make you a shot. It doesn’t change what we do. It’s nice that people have that opinion, but it’s not going to help us win. We need to do fundamental basketball things in order to win.”