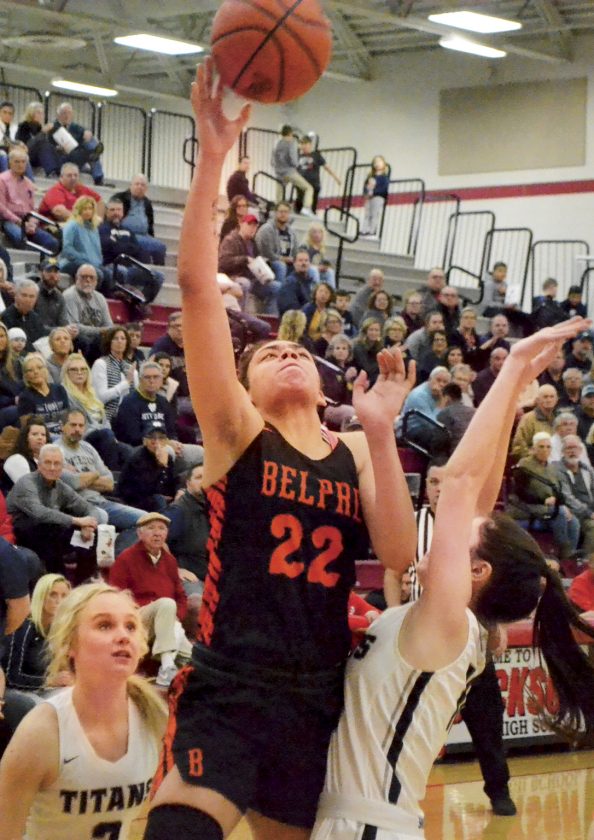 JACKSON — Belpre was never quite able to recover from a sluggish beginning as the Eagles dropped a 49-35 decision Thursday night to Portsmouth Notre Dame in a Division IV district championship game at Jackson High School.

The Lady Eagles spotted Notre Dame a nine-point first quarter lead and spent the rest of the night trying to climb back into the game before eventually falling in their bid to reach the “Sweet Sixteen” for the first time since 1997.

“They went on a run in the first quarter and we were much more physical the second quarter and throughout the rest of the game,” said Belpre head coach Chris Murray.

“I thought we missed some opportunities to close the gap but we made too many costly turnovers and they (Notre Dame) do an excellent job of taking risks and they were rewarded.”

Belpre turned the ball over 23 times in the game including five in the first quarter as the Lady Titans pulled out to a 15-6 lead.

Junior guard Ava Hassel did much of the damage for Notre Dame early on as she scored 10 points in the opening quarter alone.

“Ava (Hassel) got loose in the first quarter and hit some big shots for them,” said Murray. “We had looked at some film and they hadn’t been shooting the ball that well but they got hot early on.”

Despite turning the ball over nine more times in the second quarter, the Eagles managed to keep within striking distance as they trailed 28-17 at the half.

Belpre senior Kyna Waderker had 11 points in the opening half including nine in the second quarter.

The Eagles made a run early in the second half sparked by two more Waderker field goals as they quickly trimmed the lead to seven.

A three-pointer by Cassie Schaefer once again pushed the Titans lead to double-digits before Belpre junior Curstin Giffin drove strong to the bucket and finished with the left hand to trim the lead back to eight.

Keeping the lead in single digits heading to the final period would have been a momentum boost for the Eagles but Notre Dame played for the final shot and Hassel found Lauren Campbell open under the basket for a lay-up as the buzzer sounded the end of the third quarter.

“That was kind of the tale of the game…We would cut it to seven or eight and then they would hit a three or get a lay-up,” said Murray. “Give them credit they did a great job and I’m proud of the effort my girls gave.”

Notre Dame connected on seven triples in the game compared to zero for the Eagles with none bigger than a long 3 by Isabel Cassidy to open the fourth quarter and give the Titans a 13-point lead.

Belpre managed to pull back to within 11 a couple of times but that would be as close as they would get.

Belpre was led by Waderker’s 17 points and eight rebounds in her final game in the black and orange while Giffin finished the night with eight points, eight boards and five assists.

While Notre Dame (22-2) advances on to regional play next week, the Eagles season comes to a close with an outstanding 19-6 record.

In addition to Waderker, the game was the final one for Belpre seniors Abbey LaFatch and Kyanna Ray.

“Kyna, Kyanna and Abbey are a special group of kids and ever since they have been here they have won,” said Murray. “To get us to this game was all them and their commitment to the game. They have given everything to our program and I am proud of them.”