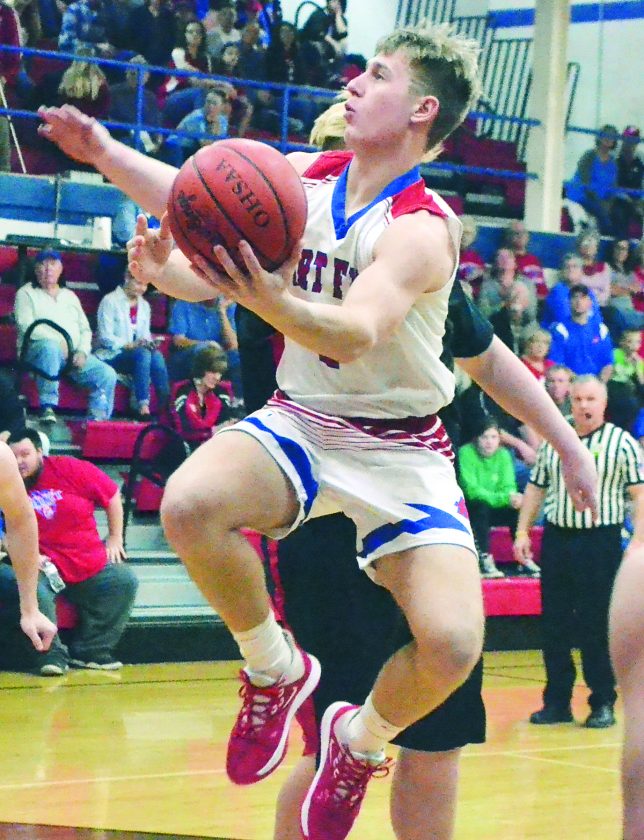 BEVERLY — It was evident from the start in Tuesday night’s Division III sectional semifinal that Cadet senior Brady Schilling was going to be a tough guard for the visiting Bellaire Big Reds.

Schilling tossed in 10 points in the opening quarter as the Cadets raced out to a big lead and never looked back, rolling to a 63-32 win.

The 6-foot-2 Fort Frye standout finished the game with 21 points and 13 rebounds to lead the Cadets to their eighth straight win.

“Brady is mismatch for a lot of teams. He can step out and shoot the 3 and he can take it inside,” said Fort Frye head coach Eric Henniger. “He’s strong enough to finish and anytime we see a mismatch with him we are going to take advantage of it and try to get him the ball.”

Schilling scored a pair of field goals early in the opening quarter and added three more later on as the Cadets pulled out to a 15-2 lead at the end of the first period.

The Cadets picked right up where they left off in the second quarter as they scored the first eight points to cap an 18-0 run to stake claim to a comfortable 23-2 lead.

The Big Reds managed to close the lead to 17 at the half thanks to a pair of late field goals by senior Trenton Wilson.

Schilling had already completed a double-double at the break as he scored a dozen points while yanking down 10 rebounds in the first 16 minutes.

“We were trying to get the ball up and down the floor as always but our main focus was on playing good defense,” said Schilling. “We work hard on the defensive end. That’s kind of our identity.”

After scoring just eight points in the second quarter, the Cadets erupted for 22 in the third as they increased their lead to 23 heading to the final quarter.

As he has done all season long, Henniger went to his bench early and often and once again got production from his entire roster, including a career-high 11 points off of the bench from junior Dylan Hart.

“Dylan is an unselfish player and does what the team needs him to do but he is capable of scoring too,” said Henniger of Hart, who has seen his playing time increase over the past several weeks. “When other teams leave him open he has confidence to step up and make a 15-footer or even step back and hit a three.”

Schilling was pleased to see Hart have such a successful night on the offensive end.

“It was really great to see Dylan come in and do what he did,” said Schilling. “He works hard every single day and I’m really happy for him.”

The Cadets out-pointed Bellaire 18-10 in the final quarter to seal the deal and punch their ticket to Friday night’s sectional final back at home against Martins Ferry.

“The defense has been the key to the success we’ve had this last month and we know every night that our defense is going to be there,” said Henniger. “This next game is going to be a very tough sectional final like it always is. We just have to bring our defense and hope our offense picks up.”

The Big Reds, whose season comes to a close with a 6-16 record, were led by Wilson with 16 points and David Zwack with 12.