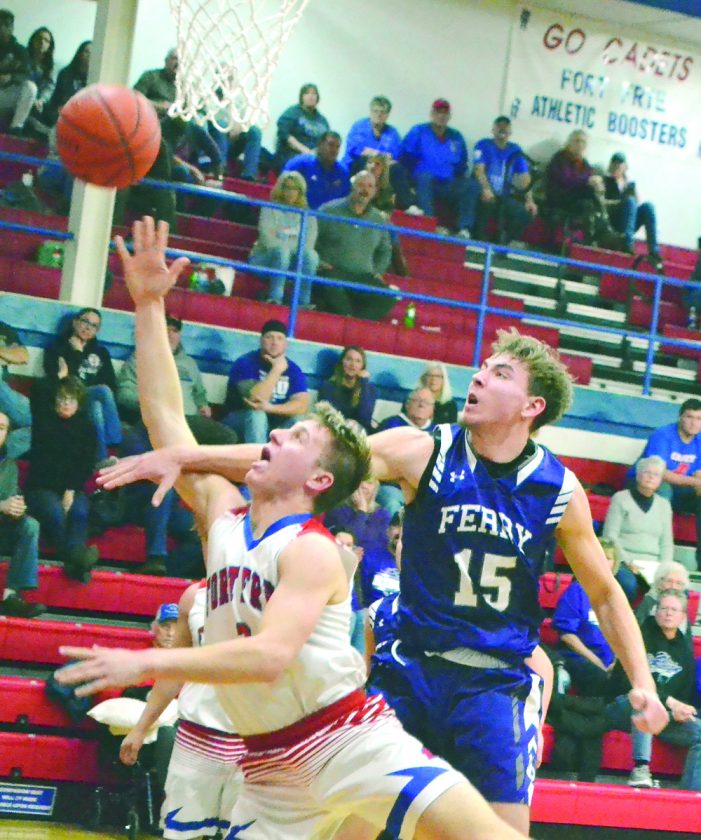 BEVERLY — Fort Frye seniors Brady Schilling and Zane Wallace combined for 33 points to pace the Cadets to a 47-36 win over the Martins Ferry Purple Riders Friday night in a Division III Sectional championship game in Beverly.

Schilling did most of his damage in the opening half while Wallace took over in the second as the Cadets fought off a late Martins Ferry charge to win their ninth straight game to claim the sectional title.

Fort Frye was without the services of injured junior Kelton Fogle, forcing head coach Eric Henniger to mix and match his rotation throughout the game and it took contributions from each and every player to get the win.

“We have been facing quite a bit of adversity and it was nice to see each and everyone step up and play big,” said Henniger. “A lot of guys stepped up to get this win and I’m proud of these kids right now.”

Fort Frye trailed the Purple Riders by a point (12-11) at the end of one quarter before getting a pair of field goals by Schilling and a bucket by junior Luke Huffman to open up a five-point lead.

Martins Ferry answered with back-to-back goals by Dasyn Hores and Logan Smith to cut the lead to one with four minutes to play in the opening half.

The Cadets pushed the lead back to four on an inside score by Dylan Hart off of a great pass by Brian Adkins before the Riders closed it back to two at the intermission when Ruben Hilson came up with a steal and drove coast-to-coast for the final points of the half.

Schilling scored 10 points and pulled down nine rebounds in the opening half, narrowly missing a first half double-double for the second consecutive game.

Fort Frye forced Ferry into eight turnovers in the first half and matched that number in the third quarter when they increased the pressure on the Riders and began to pull away.

Wallace converted all three free throws after being fouled from behind the arc and Schilling scored a put-back bucket before freshman Owen Brown canned what would prove to be the only triple of the game for the home team as they opened up an 11-point lead.

Schilling and Hores traded baskets to end the third quarter before the Cadets opened the final quarter with a 6-0 run and threatened to turn the game into a blowout.

Ethan Brooker got the run started by coming up with a steal and finishing on the other end and Wallace scored back-to-back field goals to give the Cadets their biggest lead of the game at 40-23.

Martins Ferry was not quite ready to see their season come to a close as they quickly responded with an 11-0 run to close the lead back to five with four minutes to play in the game.

“We kind of got a little lackadaisical with our passing and started taking quick shots,” said Henniger. “For about a three minute span we kind of lost our identity.”

Fortunately for the Cadet head coach and his team they quickly rediscovered that identity and held the Purple Riders scoreless over the final four minutes while making enough free throws down the stretch to capture their 20th win on the season and advance to district tournament play next week.

Schilling led the Cadets in scoring and rebounding with 17 points and 12 boards while Wallace added 16 points, including 12 in the second half.

The Cadets out-rebounded Martins Ferry by a 30-19 margin and forced the visitors into 21 turnovers in the game.

“We talked before the game about the categories we needed to have success on. The turnover battle, the rebounding battle and free throw battle and we lost all three of those categories,” said Martins Ferry head coach Derek Edwards. “We looked up with four minutes to go and somehow we are only down by five. We were right here but give Fort Frye credit, they have a good home court advantage here and that worked to their benefit.”

The Riders, whose season comes to a close with a 13-11 record were led by Hilson with 11 points while Smith and Hores chipped in with nine and eight respectively.

Fort Frye will next take on a team that handed them one of their three losses when they open district play Tuesday night against the neighbor Morgan Raiders at a site to be determined.

“We got a great effort from everyone,” said Henniger. “Every single guy knows their role and they do a great job when they are out there and that makes this a great team to coach.”