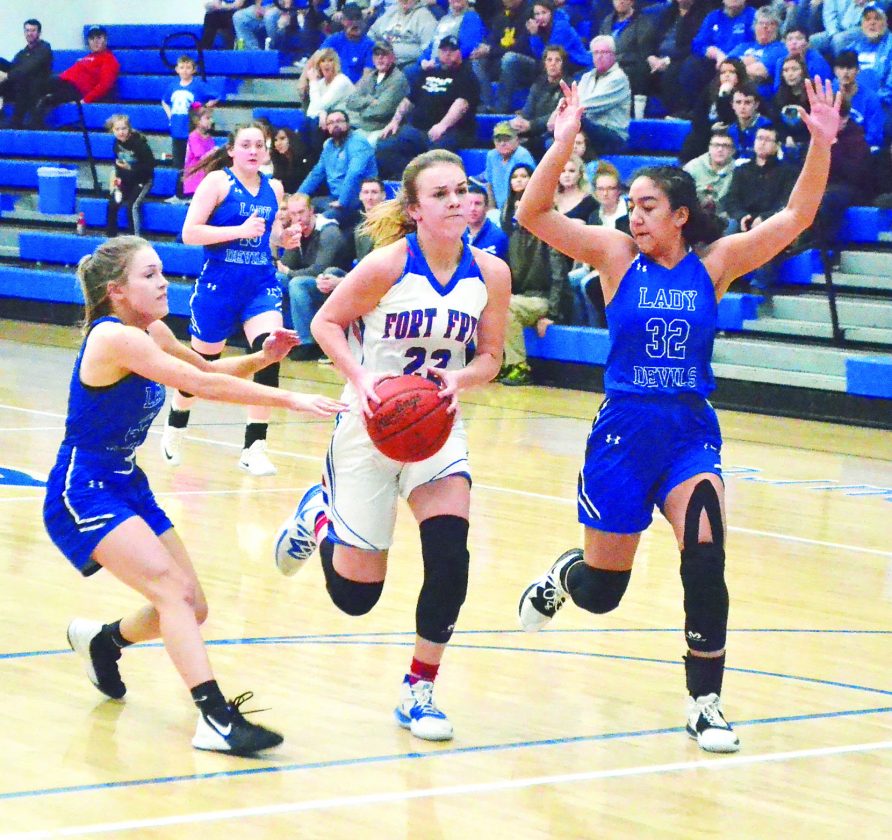 CAMBRIDGE — The Fort Frye combination of Kenzie Dalton to Hannah Archer was lethal in the first quarter of Wednesday night’s Division IV district semifinal between the Cadets and the Beallsville Blue Devils.

Archer canned four 3-pointers in the first quarter, all coming off of assists from Dalton, as the Cadets built an 18-point lead and never looked back as they rolled to a 60-26 win over a very good Beallsville squad to advance to Saturday afternoon’s district championship game.

Fort Frye came out sizzling as they made their first six shots of the game while limiting Beallsville to just a pair of field goals to open up a 23-5 lead after one quarter of action.

“You want to be able to come out strong like that and we have a strong bench so we are able to go right at teams,” said Fort Frye head coach Dan Liedtke. “We’ve got a lot of different people that can score so whatever weakness we can find in the other team we are going to take advantage of.”

Fort Frye scored the first five points of the game before Beallsville senior Ashlie Louden drained a 3-pointer for the first Devil score of the game.

Dalton and Kiersten Kesselring answered with baskets for the Cadets before Archer splashed in triples off of Dalton assists on three straight Fort Frye possessions to quickly push the lead to 15.

“Hannah found it right from the start and the thing about this team is it could have been someone else too,” said Liedtke, whose team knocked down 10 triples in the game. “That’s the kind of team that we have and I thought all the way around all the girls played well.”

A Louden deuce halted the Cadet run at 13 but the Fort finished the quarter strong as junior Olivia Schneider connected from long range and Archer came up with a steal and drove coast-to-coast for a score to increase the lead to 18.

While the Cadet offense was clicking on all cylinders so was the defense as for the third straight game in the tournament they limited their opponents to less than 30 points.

Fort Frye out-pointed the Devils by a single point (14-13) in the second quarter to take a 37-18 lead into the intermission and then limited Beallsville to just eight points in the final half as they cruised to victory number 23 on the season against just two losses.

Archer finished the night with a game-high 18 points while all five Cadet starters scored at least eight points.

Dalton filled her stat sheet nicely as she dished out nine assists while also yanking down five rebounds.

“Kenzie just brings energy to our team on both ends of the floor,” said Liedtke of his 5-foot-2 sophomore playmaker. “She’s a ball of fire and I’m just glad she’s on my team.”

Louden scored 15 points to lead the way for Beallsville while fellow senior Ashley Howell accounted for the other 11 points for the Devils whose season came to a close with an outstanding 21-4 record.

The win was the 14th in a row for the Cadets who will next take on former conference rival and familiar foe Monroe Central for a District championship Saturday afternoon at 2 p.m. at Meadowbrook High School.