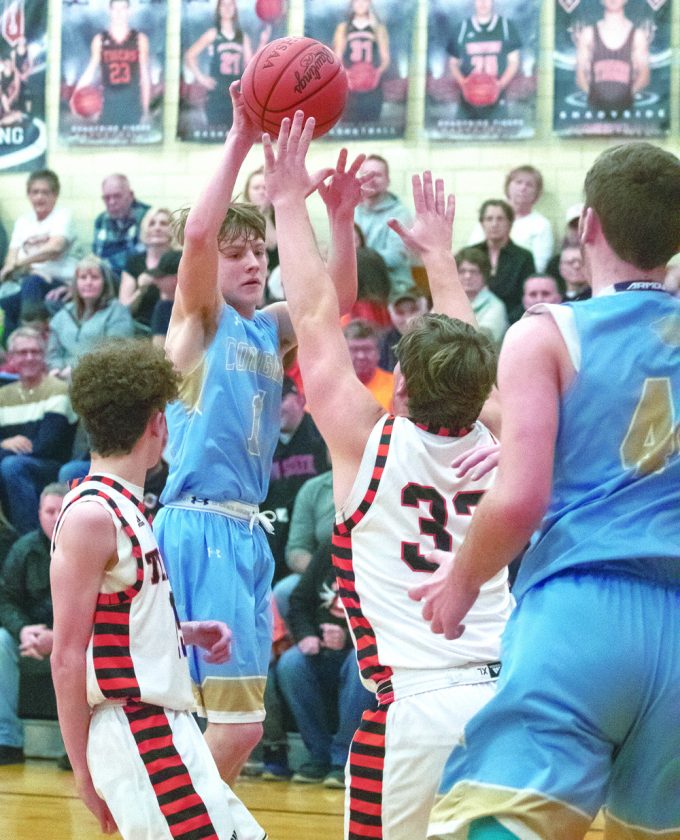 SHADYSIDE — This one won’t soon be forgotten.

Shadyside and Frontier staged an instant classic Friday night in a Division IV sectional co-final. The Tigers needed three overtimes to turn back a spirited Cougar bid in pocketing a 71-67 win.

The elongated triumph earned the Orange a district berth.

Shadyside will face Malvern Tuesday at a site yet to be determined.

The Hornets advanced via a 58-31 win over Tusky Catholic.

“It was one of those games that neither team deserved to lose. Frontier came here with a great game plan and could have easily won,”

Shadyside head coach Ed Andes offered. “Give credit to Coach (Roger) Kirkpatrick. We beat them by 15 (75-60) earlier in the season. Tonight, it was a much different story. They played super.”

The win was the 18th against just six losses for the Tigers.

Frontier, meanwhile, ended at 15-9, capturing the OVAC 1A title along the way.

“It was one of those games that could have went either way. Neither team deserved to lose this one,” he said. “My kids played hard. We played only five kids most of the night. I am proud of my kids.”

Shadyside made its victory a much tougher task than need be. The hosts owned a 12-point third quarter lead and failed to salt matters away due to faulty foul shooting. The Tigers missed eight potential game-clinching free throws from the final minutes of the fourth quarter through the third overtime.

All told, the winners were 14-of-27 at the charity stripe.

“We didn’t do a good job at the free throw line. We also committed some senseless fouls at the most inopportune times,” Andes said. “But we were able to battle through those mistakes and made the plays when we had to in the third overtime. The bottom line is we won and are heading to the districts.”

Senior Kelly Hendershot was once again the Tiger catalyst. The all-Ohioan poured in 28 points, grabbed eight rebounds and threw down a pair of dunks.

Shadyside owned a 56-54 lead in the final minutes of regulation.

The hosts misfired on a free throw with 42 ticks left. Frontier’s Tanner Bills was fouled with just 2.1 seconds to play. He nailed both freebies to send the game into overtime.

Hendershot drained two free throws with 1:28 left in the first overtime, giving the hosts a 60-58 lead. Brecken Hoff, however, meshed two charity tosses at the 1:12 mark to knot the affair.

The Tigers misfired on two foul shots with 50 seconds left. A

Frontier turnover was followed by a Shadyside miss from the floor, sending the game into a second extra session.

Shadyside won the subsequent tip and opted to hold the ball as Frontier sat in a zone. The Cougars matched up with 2:20 left. A driving hoop by Parr gave the Orange a 62-60 advantage.

Hoff made one-of-two free throws with 1:19 left to cut the deficit to one. Hendershot netted a free throw with 44 ticks to play, making it a 63-31 Tiger upperpaw. Brookover goaled to knot it at 63-all, necessitating a third extra panel.

Frontier drew first blood on a Hoff hoop. Parr responded with a trey before Brookover countered with a hoop, putting the visitors back on top, 67-66. Athletic Shadyside sophomore Bryce Amos bucketed to give Shadyside a lead it would never relinquish. Hendershot added a free throw with 55.4 seconds showing. After a Cougar turnover, Parr sank two free throws for a 71-67 Orange edge with 30 seconds left.

The two teams traded turnovers before Frontier missed from the field to seal its fate.

“We came into a tough environment and played very well. A month ago they beat us by 15 and tonight we went three overtimes,” Kirkpatrick said. “Our kids played their hearts out. I am going to miss my seniors.”