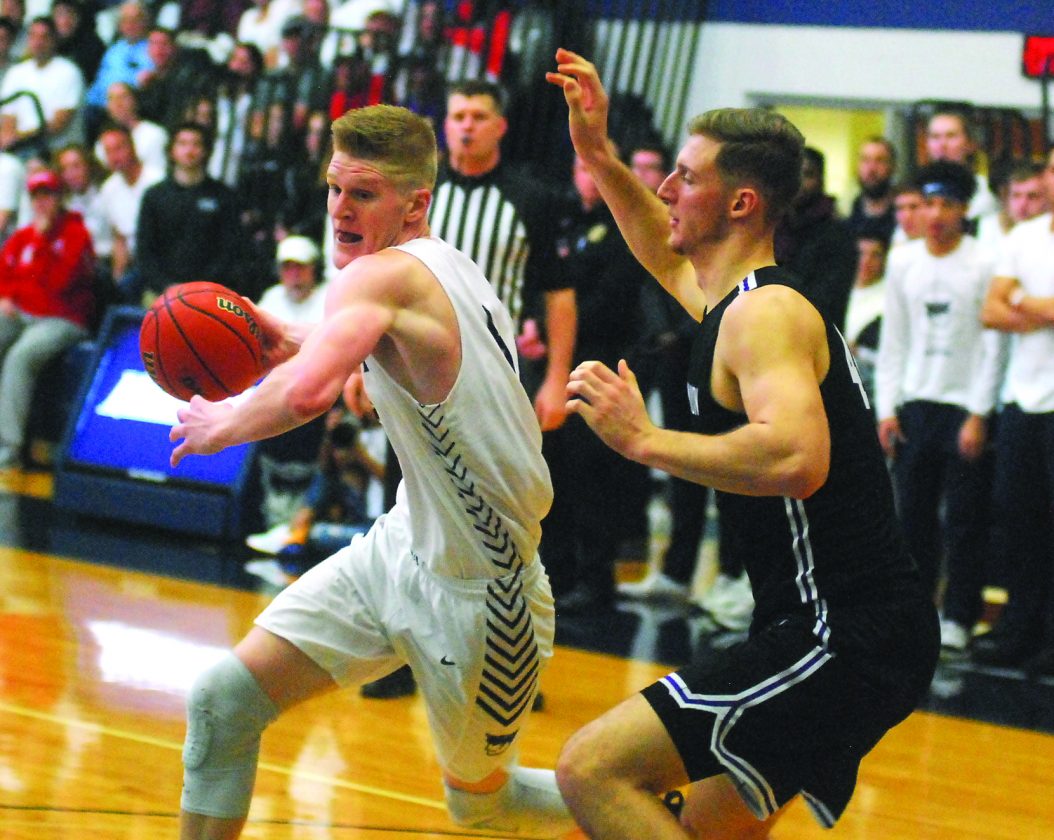 In the game of the year in the Ohio Athletic Conference Wednesday at Ban Johnson Arena, Marietta College fell into an unprecedented slump from the 3-point line.

The Pioneers, ranked 15th in Division III, finished 1 for 23 from deep and watched 11th-ranked Mount Union leave with an 81-67 victory to take a two-game lead in the OAC standings. Earlier this season, MC lost to the Purple Raiders 107-70 in Alliance.

Despite the shooting struggles, the Pioneers (18-4, 12-3 OAC) still made a second-half run, as they always seem to do in a big game at the BanJo.

Marietta got within five with 8:18 to go when Tim Kreeger came up with a steal. He was fouled on the transition dunk attempt, but made 1 of 2 at the free-throw line to make it 56-51.

Later, back-to-back baskets by Kreeger made it a four-point game before Jason Ellis, who scored a game-high 23 points, made a bucket to cut it to 66-64 with 2:57 remaining.

With all the momentum in Marietta’s favor, Mount Union’s top playmakers, Nathan Bower-Malone and Collen Gurley, rose to the occasion.

Gurley’s drive and basket stretched it back to four before Bower-Malone made an acrobatic shot and drained the and-one free-throw to put Mount up seven and silence the crowd.

From there, the Pioneers’ shooting woes continued and they were forced to start fouling. Bower-Malone, who went for 36 points in the first meeting, put the game away by going 7 for 7 at the charity stripe.

“We almost did (come back),” VanderWal said. “Our effort and our toughness kept us in it. I thought we executed really well the second half. Just couldn’t throw it in the ocean.”

“Their guards are really good,” VanderWal said. “(Bower-Malone, Gurley and Friga) do the majority of their scoring. It was a huge game-plan of ours to try to limit their shots. Gurley really got it going in the first half, and then Bower-Malone did make some huge plays down the stretch.”

Kreeger scored 16 points and grabbed eight rebounds for Marietta while Hoyng finished with a double-double of 12 points and 11 boards. Marietta, normally reliant on its depth, got just 10 points from its bench, eight coming from James.

It was only the second time in VanderWal’s 13-year tenure that Marietta failed to make multiple 3-pointers. The other instance came on Feb. 4, 2012, in a 70-63 loss at Ohio Northern. The Pioneers went 1 for 16 from beyond the arc that day.

“I can’t get all ticked off because they didn’t make some shots,” VanderWal said. “A coach can’t get mad because guys miss shots. As long as they’re competing and giving you great effort and executing, that’s all I can ask. And they did that.”

Marietta will look to bounce back at 3 p.m. Saturday when Wilmington visits. There’s still a lot at stake for the Pioneers even though the OAC regular season crown may now be out of reach.

“They played their tails off,” VanderWal said. “They didn’t fold. They showed a lot of toughness. So I told them I was proud of them for that, but we’ve got to figure out a way to make the plays. I also told them they’ve got to stay together. We’re probably not going to win the (OAC) regular season title, but we have so much to play for still.”