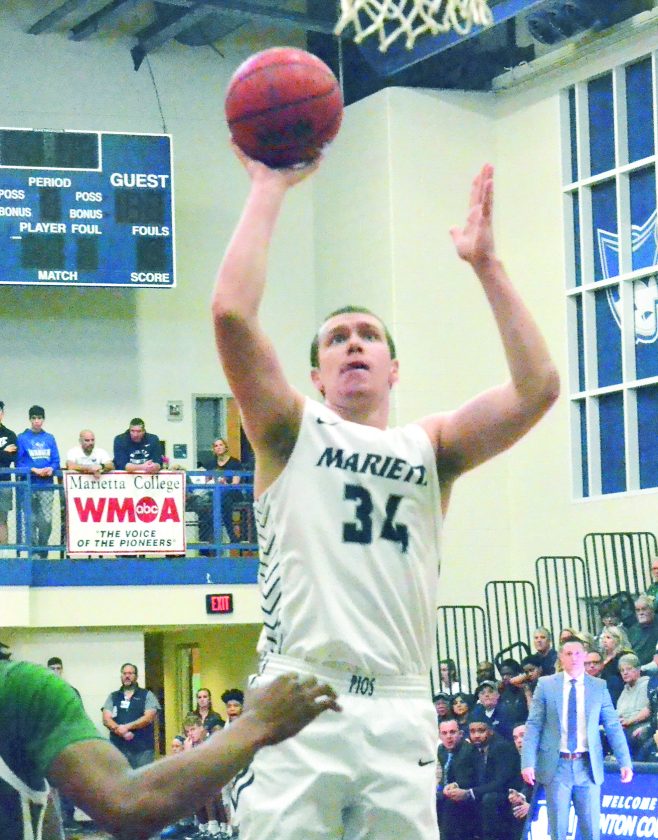 “Wilmington is tough as nails,” said 13th-year MC head men’s basketball coach Jon VanderWal. “But it’s the OAC Tournament. We smacked them here a week or so ago, and they weren’t dialed in and didn’t play as hard as Wilmington plays.

“But tonight, the season was on the line, and so….I told our guys in the locker room that from here on out, we are getting everybody’s best shot no matter what. And we usually do. But Wilmington came in and fought for their season tonight.”

With the victory, second-seeded Marietta — No. 2-ranked in the D3hoops.com Men’s Top 25 with a 21-5 record –will be hosting third-seeded John Carroll University (18-8) in a semi at 7 p.m. Thursday at the BanJo.

“It’s going to be another wild one,” VanderWal said.

Against Wilmington (10-16), Jason Ellis paced the Pioneers with 20 points.

“Wilmington played really hard,” VanderWal said, “and caused us to turn it over 21 times. And that’s what kept them in the game.”

Sparked by Lydic’s 11 and Ellis’ 9 first-half points, MC staked itself to a 44-38 advantage. Keeping WC close, Mansfield and Smith tallied 14 and 8 points, respectively.

After break, Marietta never trailed, but Wilmington stayed within striking distance the entire 20 minutes. And, at the 6:45 mark the Quakers knotted the score at 66-all on Kanu’s bucket. But the Pioneers regained the advantage on a pair of freebies by Ellis. Ellis then hit back-to-back 3s to give MC a five-point cushion (74-6).

WC cut it to 78-76 on a Manfield drive with just a little over a minute remaining in the contest. But down the stretch, Ellis three foul shots to keep the Quakers at bay.