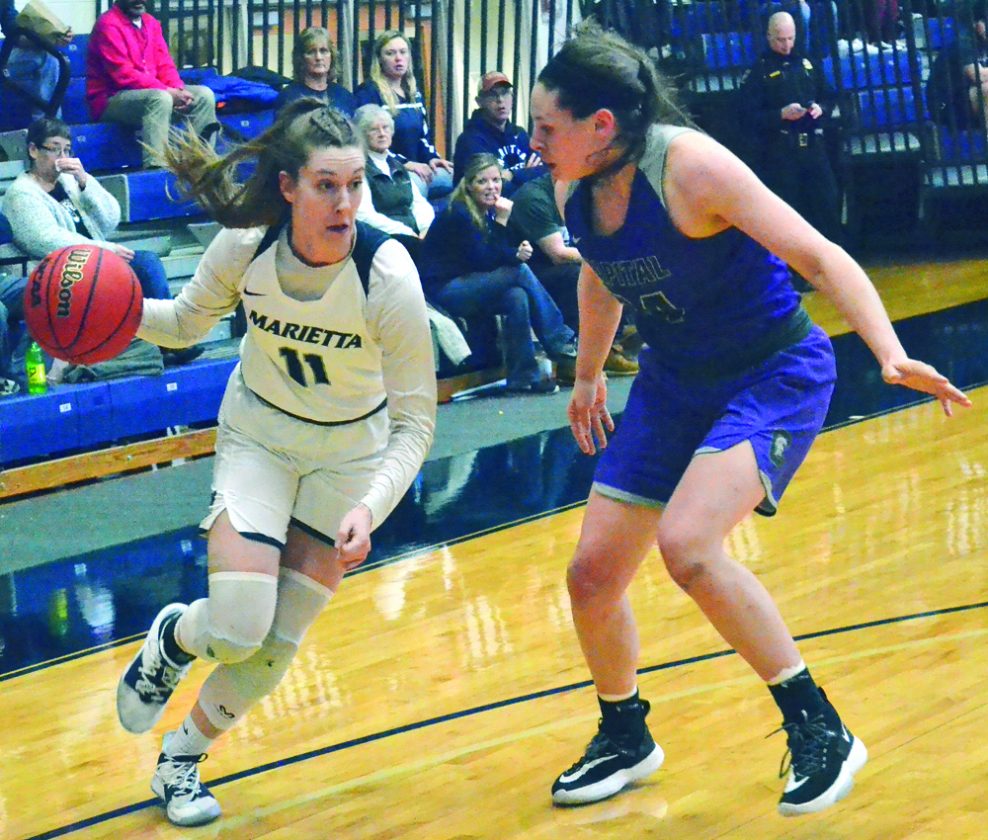 “It’s a big comeback,” said Taylor, who also grabbed a team-high eight rebounds. “Being seniors, me and Alexis wanted an extra game.”

Marietta (14-12) is now scheduled to play at nationally 10th-ranked Baldwin Wallace (24-2) at 7 p.m. Thursday in a semifinal game. During regular-season play, the Pioneers were 0-2 against the Yellow Jackets.

“We’re going to have to defend the 3-point line better,” said Pioneer boss Kole Vivian. “When we played them up there (in Berea), I think they made 16 on us.

“We’re going to go up there and see what we can do.”

Capital (14-12) was paced by Cassidy Bosch’s 13 points and nine boards. Elli Wachtman added 10 markers while Regan Stonerock netted seven points and collected nine caroms. The Crusaders were 0-2 against the Pioneer in the regular season.

“Beating Capital three times says a lot about how our kids have grown up,” Vivian said.

During the quarterfinal tilt, there were eight ties and five lead changes.

Marietta went 0-9 from the field in the first quarter and trailed 10-5. All of the Pioneer points came from the foul line.

“We got off to a very slow start,” Taylor said. “I was getting a little worried that we weren’t going to score in that first quarter. But we finally got one to go, and they started to fall.”

Congrove drained a 3 at the 7:43 mark of the second period for MC’s first field goal of the game, reducing the deficit to 13-12.

“Capital wasn’t making their shots, either,” Vivian said. “And we did a good job at the foul line.

At the 5:37 mark in the second, Camille Cummins converted a pair at the line to give the Pioneers a 16-15 lead. But Cap regained the advantage and led 26-22 at the intermission.

In the third quarter, Marietta, sparked by Taylor and Enochs, grabbed the lead near the 5-minute mark, and had a 38-35 advantage going into the fourth quarter.

The final period was tight the entire eight minutes until Enochs drained a 3, making it 49-45 MC.

With about 4 seconds left, Taylor made a pair at the line to help seal the victory.

“We just had to grind it out,” Vivian said.